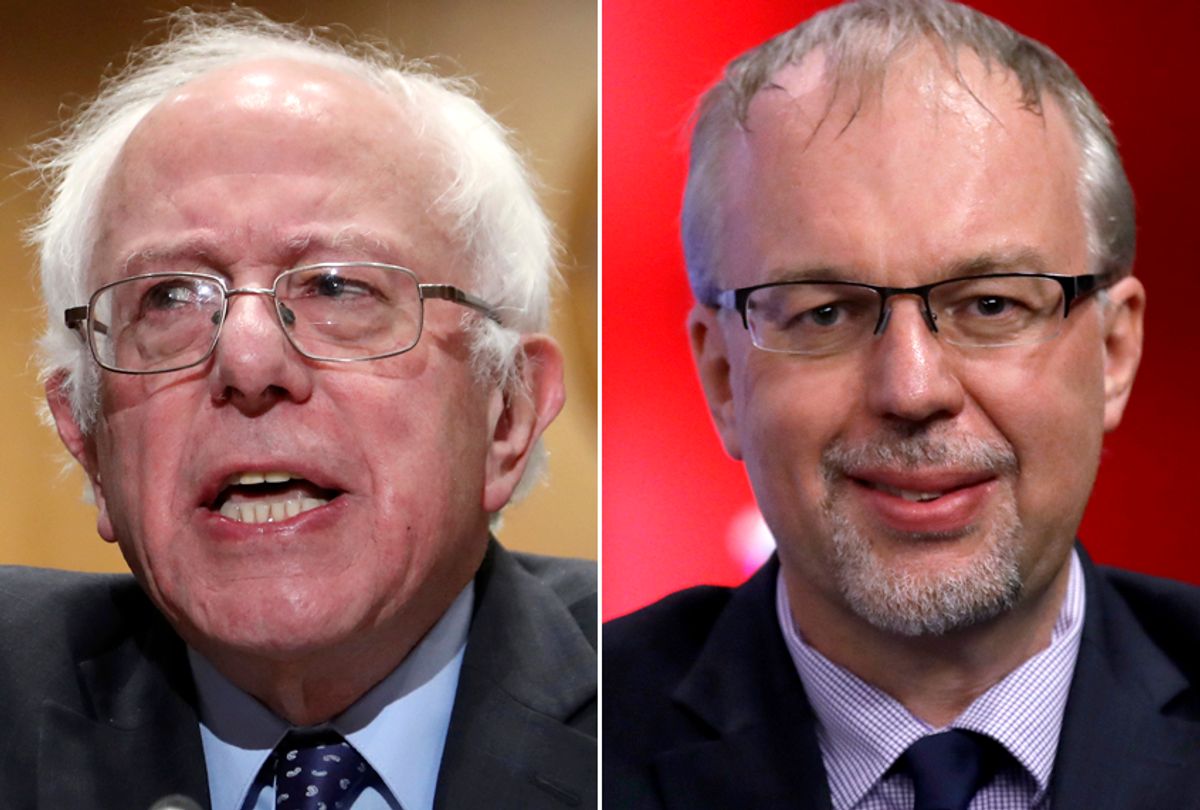 Sen. Bernie Sanders, I-Vt., may be a hot political commodity these days, but that electoral magic doesn't appear to be rubbing off on his son.

Despite having a surname that would make most politicians green with envy, Levi Sanders is flailing in his effort to win a congressional seat in New Hampshire's 1st district, according to ABC News. One notable detail here is that Sanders himself has not endorsed his son's campaign; in a statement to the Boston Globe in June, the Vermont senator explained that "in our family... we do not believe in dynastic politics. Levi is running his own campaign in his own way."

The Boston Globe, however, had a different theory as to why Sanders has withheld his endorsement:

Aversion to dynasties aside, New Hampshire observers speculate that the real reason Bernie Sanders has not weighed in on his son’s behalf is that Levi Sanders is running what most in the state consider to be an inept campaign – and Bernie Sanders doesn’t want to be damaged in the run-up to a potential 2020 campaign of his own.

Dante Scala, a professor of political science at the University of New Hampshire, explained to ABC News that at this point in the race it would be surprising if Sanders even finished in the top half of the candidate field. In addition to not being endorsed by his father, Scala argued that Sanders is hurt by the fact that he seemingly hasn't been able to access his dad's prodigious mailing list, hasn't raised much money, is notorious for grousing about supposedly unfair treatment at the hands of the New Hampshire Democratic Party and doesn't even live in the 1st congressional district.

"So far, the best day of Sanders’s campaign was the first day. The Sanders name doesn’t do him a lot of good without his dad’s fundraising network to fund him. And he lives far outside the district, and that hurts as one might expect," Scala told ABC News.

He added, "Activists here have high standards for campaigns."

The Sanders dynasty is well-known for its aversion to centrist politics and its desire to move the Democratic Party to the left. As Bernie Sanders' 2016 campaign manager Jeff Weaver told Salon in May, "the 2016 race was a playing out of the conflict within the party between a majority who want to see the party return to its historical mission and those who want to cling to the failed neoliberal experiments of the 1990s. A lot of people have been raised in the DLC [Democratic Leadership Council] Democratic Party since the 1990s. As you know, the Democratic Party prior to that had not held the presidency since the election of Ronald Reagan in 1980."

He added, "For many people, what they see in the Bill Clinton era of the Democratic Party is their experience of it. But that is not the reality. This party has a proud history and a proud tradition and has a lot of work left undone, as articulated back in 1944 by FDR. There are many of us who want to see that work completed."

How a young Bernie Sanders learned about the value of money

An insight into the character of Bernie Sanders