For the third year in a row, the Emmys' pick for best TV movie isn't a movie at all. When will it end? 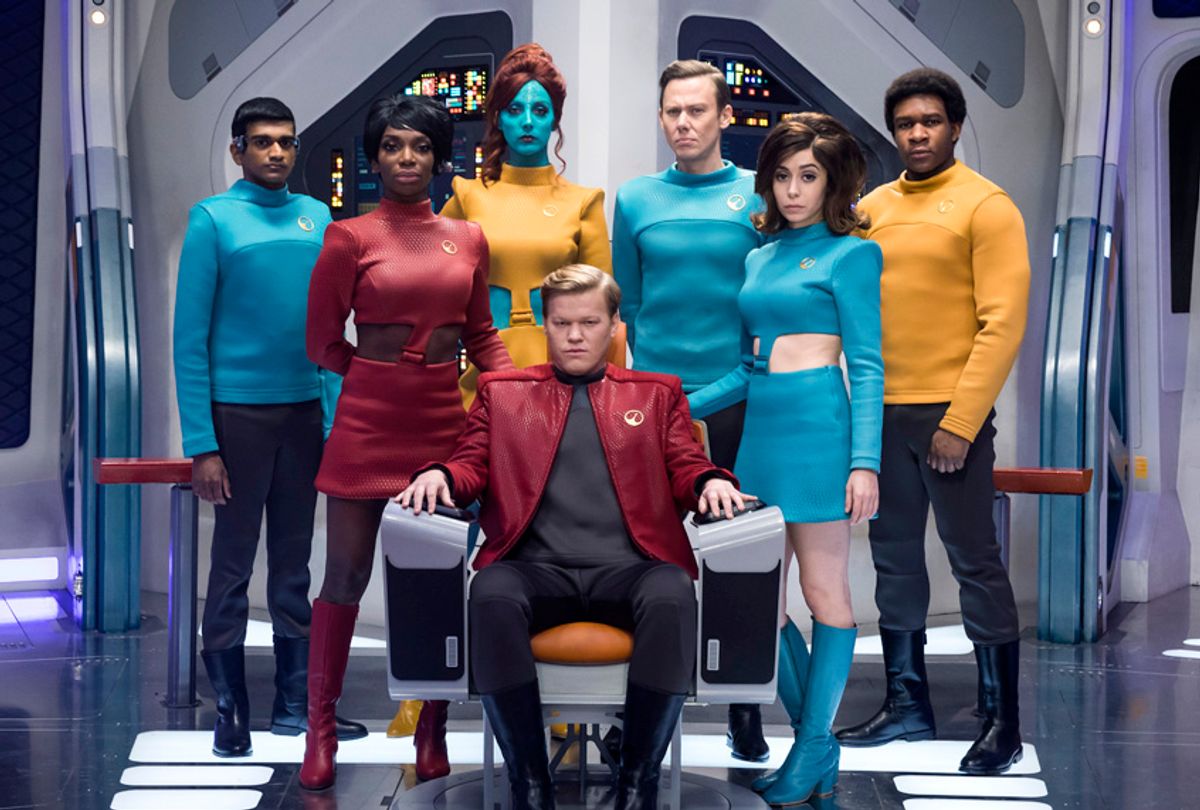 This is the second year in a row an episode of Charlie Brooker’s Netflix series has triumphed in the TV Movie category, and the third year a non-movie has won, given “Sherlock’s” victory for a “TV special” in 2016. This fact alone should be enough of a tip-off something has gone wrong here; after all, even if sequels that don’t rhyme with “The Toddfather: Fart Flu” actually won Oscars, this isn’t the Oscars. It’s the Emmys. Here, voters are supposed to know the difference between TV and film.

Even if they don’t, everyone should be able to recognize when one is masquerading as the other for less-than-artistic reasons. Due to clear category fraud, possible voting bias, and a general acceptance of long-held facts (see the photo below), here’s why the Emmys need to change their rules before the TV Movie category mutates into something unrecognizable.

It’s not a movie

For all the effort Netflix put into selling “USS Callister” as a TV Movie to TV Academy members — they even shifted “Black Mirror” to the back of the title and put it in parenthesis: “USS Callister (Black Mirror)” as opposed to last year’s winner, “Black Mirror: San Junipero” — it’s still not a film. It’s an episode of an ongoing television series, just like the other five episodes released together to comprise Season 4.

Just because something meets the minimum length to quality for a feature doesn’t make it a movie. If you want to get Greek about it, “episodes” comes from the Greek words “eisodos” and “epi” which mean “entry” and “in addition,” respectively. Considering there are additional entries of “Black Mirror” before and after “USS Callister,” it certainly fits the bill. But come on now, no one wants to take a history class here. It’s 2018! As movies and television continue to blend their mediums, and Netflix maintains a thin but firm line between its Oscar contenders and its Emmy contenders, the onus on deciding what constitutes a movie vs. a TV show is on the group handing out awards. (That being said, if the TV Academy wanted to punt on this decision, it’s worth nothing “USS Callister” doesn’t meet the minimum length requirements set by the Screen Actors Guild for feature films. It’s 76 minutes, and SAG sets the low requisite at 80.)

Read more IndieWire: ‘The Tale’: Jennifer Fox on Putting Herself in This True Story, Choosing HBO Over Theaters, and What’s Next

So how does the TV Academy set eligibility for its TV Movie field? As the 2018 rules state: “A television movie is defined as an original program, which tells a story with beginning, middle and end, and is broadcast in one part.” So does “USS Callister” qualify?

Moreover, there are other fundamental rules set by the TV Academy that should’ve been road blocks to “Black Mirror” qualifying. Requirements for individual achievements (best actor, actress, director, etc.) clearly state, “Extended-length episodes of series may only be entered in the series area and may not be entered as movies, limited series or specials.” While that’s there to prevent bias toward individuals who are given extra screen-time in lengthy episodes, why the same logic can’t apply to TV Movies is unknown.

Also, the minimum number of episodes for a program to qualify as a series is six — the same number of episodes in the most recent two seasons of “Black Mirror.” Why this doesn’t disqualify it from submitting specific entries as TV Movies, when the series as a whole would qualify for “Drama Series” or “Limited Series” opens up the floodgates to future problems.

OK, it’s not a movie, but voters still love it, so what’s the problem?

Pressing issues are twofold, really. First and foremost, for the current films competing against “Black Mirror,” there’s a potential voting bias — and it could be a big one. The Emmys have a history of rewarding the same shows over and over again to the point that many people question whether voters are still watching the shows they pick to win. After all, if anyone watched “The Big Bang Theory” Season 4, there’s no way Jim Parsons wins Best Comedy Actor in 2011.

So “USS Callister” could be benefitting from four years’ worth of “Black Mirror’s” good reviews and cultivated fans. While that’s a hard problem to solve in other categories — where there’s no way to definitively say, “Hey! You voted for the prestige of the series overall, not this season of television!” — the TV Movie category shouldn’t have to worry about it. These are standalone entries, after all. Sure, maybe “Fahrenheit 451” has fanfare from Ray Bradbury’s book, but HBO’s new take would have to overcome skeptics, as well. That’s not the same relationship voters have with an ongoing anthology series like “Black Mirror.” (Not to mention, four seasons’ worth of cast, crew, directors, producers, etc. are voters, too. No other “movie” has that kind of populace.)

Even if you don’t agree with that argument, the main issue at play is indisputable: This is category fraud. Netflix is manipulating the TV Academy into helping the streaming giant land more nominations — and more wins. Whenever possible, the network doesn’t want its own shows competing against themselves, and this year it’s successfully avoided “Black Mirror” splitting votes with its top contender in the Limited Series race, “Godless.” Netflix can have two winners if it’s lucky and, after “USS Callister’s win,” it already has one.

It’s a savvy move, and Netflix shouldn’t feel even the slightest bit of guilt. Every year, networks try to maneuver their series to different categories to optimize their ceilings for nominations and wins. (It’s more fun if you call it what it is: gold-digging.) Whether it’s HBO submitting “True Detective” as a Drama Series in its first season or “The Marvelous Mrs. Maisel” qualifying as a comedy despite its hourlong episodes, everyone does it.

The difference when it comes to the TV Movie category is that the TV Academy isn’t playing defense. In the past, they’ve made adjustments for the greater good: When “Orange Is the New Black” sparked outrage for running as a Comedy Series, in came the hour/half-hour designations and appellate committees to decide where series belong. Some hourlong series still qualify for the comedy race, while “Orange Is the New Black” has been restricted to drama. Even after “Black Mirror” won for “San Junipero” in 2017, nothing changed. If anything, the TV Academy just tried to avoid the issue by shifting the category from the Primetime Emmys to Creative Arts — handing out the trophy at the ceremony that’s not televised.

Fine, but there just aren’t that many good TV movies!

Here’s the biggest problem facing the TV Academy: Since 2014, when the Outstanding Miniseries or Movie split into two categories (Limited Series and TV Movie), voters have often complained about a lack of TV Movies worth honoring. To say that this year, with “The Tale” sitting right there, is pretty absurd, but one still has to look at the big picture. Over the last few years, the category has been weak, though it’s subjectively not as big of a problem as some think and it’s still objectively fixable.

This year, there were 34 movies on the Emmy ballot, four of which were Hallmark’s “Garage Sale Mysteries” starring Lori Loughlin, and that surname doesn’t do their prestige-level any favors. Other lowlights included Lifetime’s “Cocaine Godmother,” which IndieWire’s Hanh Nguyen gave a “D” for “deserving”; “Sharknado 5: Global Swarming,” which should be ineligible for its tactless title alone; and even “Fahrenheit 451,” which received a nomination despite getting burned with a score of 47 on Metacritic.

Yet plenty of well-reviewed films didn’t make the cut. HBO’s “Notes From the Field” was given a push after earning solid reviews, as was Masterpiece’s “Child in Time” movie starring Benedict Cumberbatch. That’s not a strong sample size, but quality films like “The Dresser” and “Killing Reagan” have been kept out of past races, and there are more TV movies out there; Netflix just has to submit them.

Adjusting the rules to keep episodes out of the running would put pressure on all networks to submit actual films in the TV Movie category. Amazon also unsuccessfully tried to get two of its “Electric Dreams” episodes nominated, showing where the category is headed unless changes are made. Will the TV Movie race just be a select sample of Limited Series episodes? Will it morph into a Best Episodes category? Will the art of moviemaking for the small screen disappear into the ether, right when more people are watching big picture movies at home? It’s up to the TV Academy to do something, and they should. It’s a sad state of affairs when the Emmys are willing to concede TV’s best movie isn’t a movie at all.