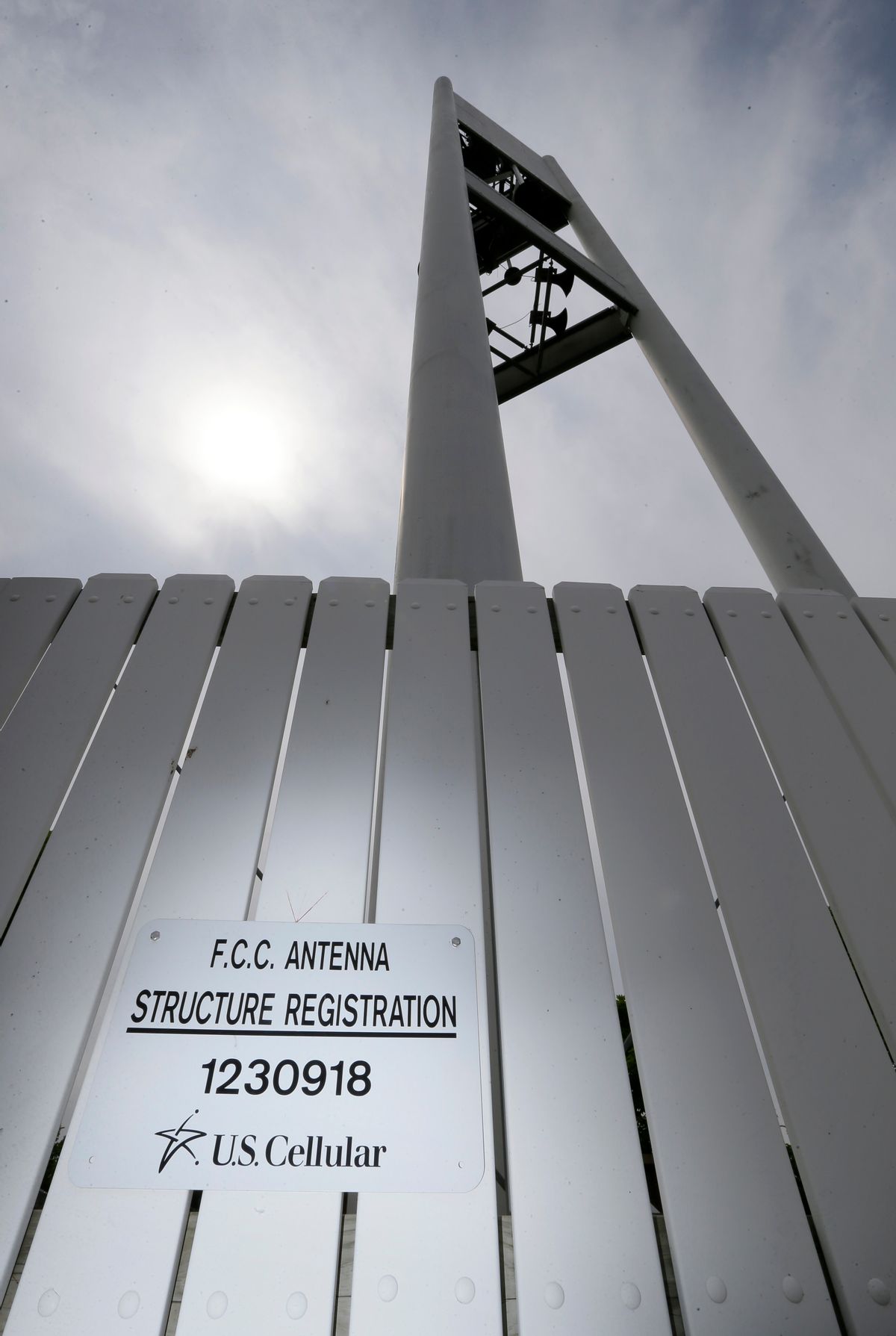 In this June 10, 2014 photo a cellphone tower inside the bell tower is seen over the Resurrection Lutheran Church in Ankeny, Iowa. As wireless companies fill gaps in their networks, many have sought to camouflage the ungainly outdoor equipment that carries the nations daily diet of calls, text messages and data. (AP Photo/Charlie Neibergall) (AP)
--

The Trump administration is considering proposals for a national 5G wireless infrastructure in order to counter China’s position in global technology markets, despite the many uncertainties and potential dangers of this technology for human health and the environment.

According to a PowerPoint deck produced by a senior National Security Council official, the United States has to build superfast 5G wireless technology quickly because “China has achieved a dominant position in the manufacture and operation of network infrastructure,” and “China is the dominant malicious actor in the Information Domain.” Trump has argued that, unlike a privately created 5G network, a government-run 5G network would be more secure against a threat of Chinese operatives and hackers that want to carry out cyber-espionage.

“We want to build a network so the Chinese can’t listen to your calls,” the senior official told Reuters.

On July 25, the Senate Commerce, Science, and Transportation Committee held a hearing titled “The Race to 5G: Exploring Spectrum Needs to Maintain U.S. Global Leadership.” In the hearing, Sen. Ted Cruz, R-Texas, said the US wireless industry is “poised to invest roughly $300 billion in deploying 5G networks, which could create three million new jobs and boost GDP by $500 billion.”

The 5G network would provide faster internet speeds and low latency wireless broadband services, which means faster and higher capacity transmissions to carry data, run driverless cars and support other yet unknown technological innovations. But does national security and these purported benefits justify potential dangers to wildlife and human health?

In 2018, the US National Toxicology Program and the Ramazzini Institute in Italy have both concluded via large studies that wireless radiation is a potential cancer risk. The World Health Organization classified these radiations as class 2B carcinogens, meaning they are possibly carcinogenic to humans.

The science also raises concerns that the implementation of 5G networks will harm not only humans, but also the environment and wildlife, particularly the bees, butterflies and other pollinators needed to grow our food sources. Wireless radiations can disrupt the magnetic “compass” that many birds and insects use for migration.

“We apply limits to all types of pollution to protect the habitability of our environment, but as yet, even in Europe, the safe limits of electromagnetic radiation have not been determined, let alone applied,” said Matt Shardlow, CEO of the charity Buglife, an organization in Europe devoted to the conservation of all invertebrates.

For 5G to be implemented, a dense network of smaller cellular infrastructure is required because 5G airwaves don’t travel as far as older generation networks do. This infrastructure would inevitably put millions of people in close proximity to a potential carcinogen.

After word of Trump’s plan got around, the Federal Communications Commission (FCC), wireless industry groups and lawmakers from both parties in Washington rejected Trump’s 5G nationalization plan because they are ideologically opposed to building public telecommunications services. For example, Rep. Greg Walden, R-Oregon, chairman of the House Energy & Commerce Committee, commented, “We’re not Venezuela, we don’t need to have the government run everything as the only choice.” FCC Chairman Ajit Pai Tweeted a statement opposing any proposal for the federal government to build and operate a nationwide 5G network.

In June, it was reported that Mike O’Rielly, a Republican FCC commissioner and Trump supporter, wrote an email to a telecom attorney in January stating that the administration’s own proposal to nationalize a 5G network around the country “would be a tremendous error and an executable nightmare, especially for this administration which has faced inordinate obstacles and opposition.”

Many progressive Americans in favor of net neutrality would argue that internet should be a municipal public utility, just like garbage collection or electricity. In today’s world, if you don’t have internet at home, you not only miss out on connecting with your social network, news and culture, but most importantly on your ability to access and manage your banking or any services that you are subscribed to.

However, the internet can also be delivered through wires. We have choices when it comes to telecom infrastructure. In addition to the massive amount of data monitoring, 5G’s infrastructure will require millions of new radiation-emitting cell towers that the FCC is intending to place on street lights, utility poles and/or mailbox-size transformers in front of our homes.

I sent a letter to the heads of the FCC, Department of Education and Department of Health and Human Services that was signed by actors, filmmakers and advocates like Robert F. Kennedy Jr., Laura Dawn and Naomi Wolf. We asked for a federal warning about exposure to wireless radiation from wifi just like the city of Berkeley’s “Right to Know” Ordinance for cell phones, as well as federal public health fact sheets about ways to reduce exposure to wireless radiation, particularly for children in schools.

California took a leadership role in 2017 by issuing a public health fact sheet, “How to Reduce Exposure to Radiofrequency Energy from Cell Phones.” It would be helpful if all health agencies — federal, state and local — issued wireless technology safety guidelines. Now that the National Toxicology Program study has raised serious concerns regarding the potential carcinogenicity of 5G radiation, in accordance with statutes that require businesses to inform citizens about exposures to chemicals known to cause cancer and reproductive harm, and all residents of the US should be taught safer handling of wireless technology.

It’s up to Congress members to stand firm in their resistance to Trump’s plans for a national 5G system, especially with his efforts to further unravel the national health care system. These two matters are closely related, because scientific research has shown the need for further investigation before subjecting humans and environment to 5G network exposure.

Sabine El Gemayel is a filmmaker and the producer of the documentary Generation Zapped.