In his new book, Neil deGrasse Tyson explores the tensions and partnerships between astrophysics and the military 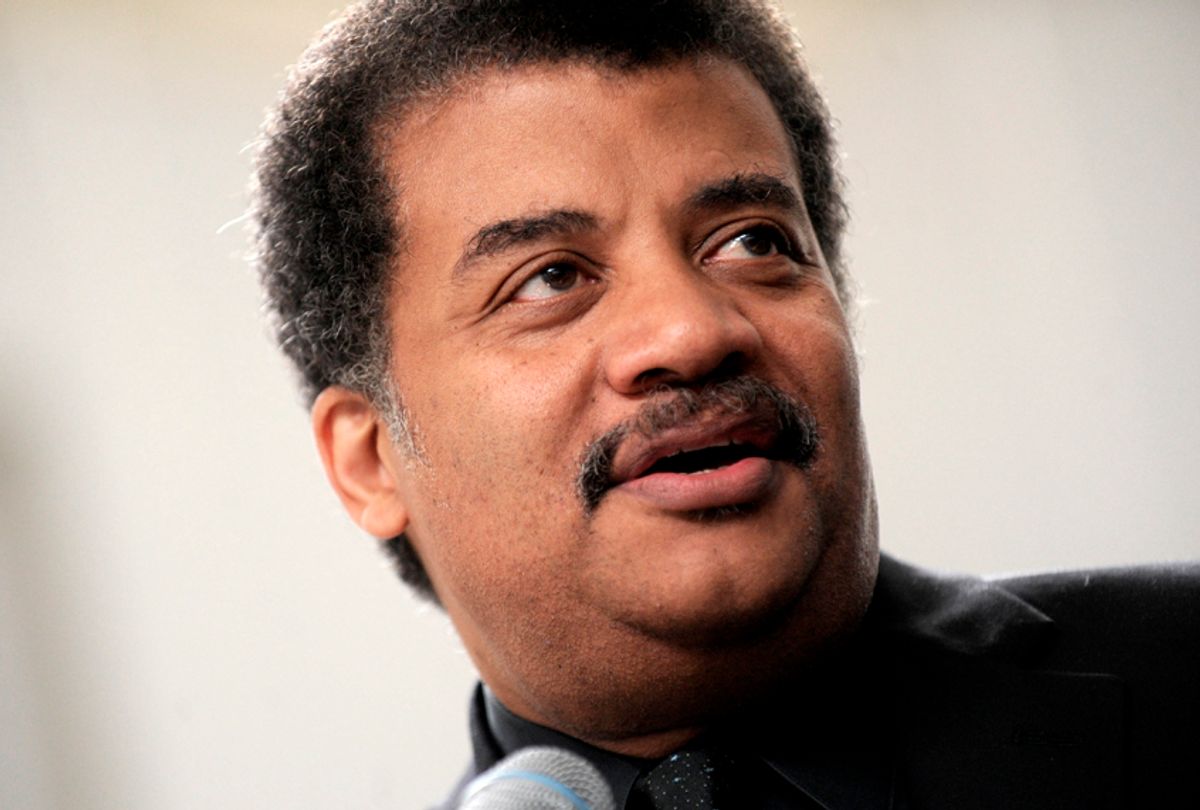 In pop culture, there's two general stereotypes the public has about scientists. There's the mad scientist of comic book and Hollywood fame, the cackling monster whose desire to conquer reality and life itself often drives him to discoveries that cause widespread destruction, including his own. Then there's the more positive image of the tweedy nerd whose enthusiasm for knowledge and discovery can sometimes be off-putting, but is often just plain infectious.

Neil deGrasse Tyson, the astrophysicist who has found fame as a science educator and host of the reboot of Carl Sagan's TV series "Cosmos," is perhaps the most well-known living example of the second public image of a scientist. His nerdy exuberance is more than earned by his breadth and depth of knowledge not just about astrophysics, but about the history and culture of science. In his hands, science seems fun, cheerful, and not at all threatening.

But in his new book, "Accessory to War: The Unspoken Alliance Between Astrophysics and the Military," Tyson and his co-author Avis Lang look the darker side of astrophysics and astronomy — advances in the field have always gone hand in hand with the development of military technology meant to more efficiently kill people.

"The universe is both the ultimate frontier and the highest of high grounds," Tyson and Lang write. "Shared by both space scientists and space warriors, it's a laboratory for one and a battleground for the other."

The book traces the history of this entanglement between stars-driven scientific inquiry and the more immediate on-the-ground perpetuation of warfare. As the authors lay out, militaries have relied on astronomers since the beginning of history itself, depending on star charts to create maps that generals and especially sea captains used when waging battles. Since then, the world of astronomy and the world of war have spoken to each other and the people in each have worked tightly together, leaning on their shared need for everything from telescopes to GPS satellite technology to rockets.

In an interview this week for Salon Talks, for instance, he refuted the popular version of Albert Einstein painting him as a pacifist.

"He was all for the bomb," Tyson declared. "He wrote a letter to Roosevelt saying we have the power; we should make the bomb because Hitler's bad."

The acclaimed astrophysicist on science and war

The letter is known as the Einstein-Szilárd letter, because it was written by Hungarian physicist Leó Szilárd and signed by Einstein. In it, Einstein warns that "it may be possible to set up a nuclear chain reaction in a large mass of uranium, by which vast amounts of power and large quantities of new radium-like elements would be generated" and that the German army is onto this fact and quite likely is exploring the possibility of making a weapon out of this research. He recommends "some permanent contact maintained between the Administration and the group of physicists working on chain reactions in America," a recommendation that led to the Manhattan Project and the development of the first nuclear bomb.

As Tyson told Salon, Einstein had complex feelings about the bomb and spoke against its use in Japan. But it's also hard, as Tyson argues, to quarrel with the rationale that led Einstein to warn Roosevelt in the first place. War, in other words, is complicated — as is the role of scientists in it.

Tyson writes that "the vast majority of my fellow astrophysicists" don't like to think too much about this reality, and instead "recoil at the prospect of war." But as he himself found out, it's not that easy.

The book opens with a story of Tyson, who was on a presidential commission focused on the aerospace industry during the second Bush administration, attending a Space Foundation symposium that happened to be at the same time that the Iraq War was beginning. Tyson found himself aggravated with anti-war protesters outside the event, assuming they were "politically naive." But inside, he found that the display screens throughout the symposium were tuned into the coverage of the invasion of Iraq, and the scene made him more sympathetic to the protesters.

Every time a weapon was described, he recounts, the reporters "announced the names of the corporations that manufactured it," and every time "a corporation was identified as the producer of a particular instrument of destruction, its employees and executives in the audience broken into applause."

The illusion that scientists can simply float above the death and destruction that their discoveries contribute to — or ignore the military-industrial complex that feeds science funding and knowledge that helps it grow — was dashed.

To be clear, the mad scientist figure of Frankenstein and every other Marvel movie on the market is nowhere to be seen in this book. Even scientists who were closely involved in the development of technology directly meant to kill people, such as the nuclear bomb, have not been the cackling sociopaths of B movie entertainment. But nor does Tyson want readers to imagine that scientists are innocent babes, unaware of the implications of working so tightly with the military-industrial complex when it comes to developing their own work.