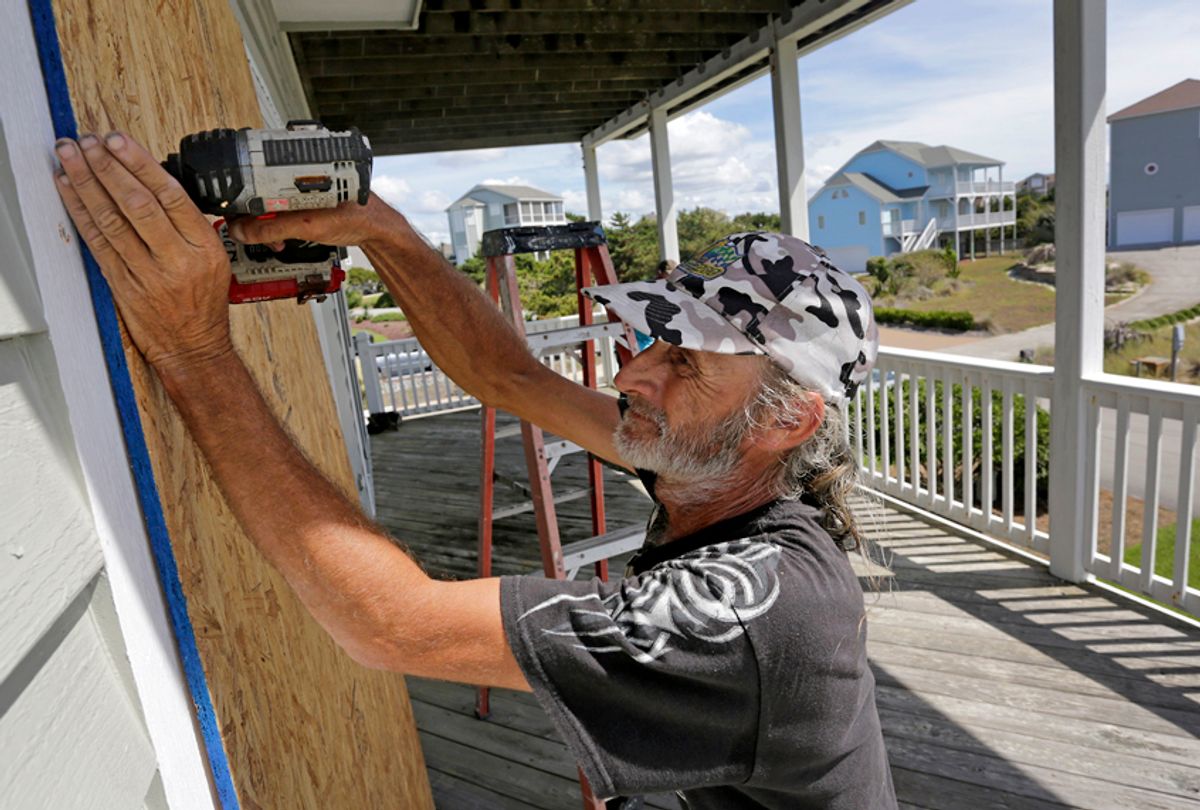 When reporting on the relationship between North Carolina's rising sea levels and the impending impact of Hurricane Florence on the east coast, HuffPost made this observation:

In 2012, North Carolina legislators passed a bill that barred policymakers and developers from using up-to-date climate science to plan for rising sea levels on the state’s coast. Now Hurricane Florence threatens to cause a devastating storm surge that could put thousands of lives in danger and cost the state billions of dollars worth of damage.

While it is impossible to know these things with any precision, climate scientists have long been drawing connection to the increased number and severity of natural disasters — hurricanes, wild fires, floods, draughts — and the ongoing warming of the earth's atmosphere due to various human-caused emissions. As Hurricane Florence continues to barrel toward 300 miles of coastline with all of its Category 4 power, the question remains: To what extent is this being caused, or at least exacerbated, by man-made climate change?

"Human-caused increasing greenhouse gases in the atmosphere produced an energy imbalance and its partitioning between atmospheric, ocean, cryosphere and land heat reservoirs govern how the global climate evolves," Kevin Trenberth, a Distinguished Senior Scientist in the Climate Analysis Section at the National Center for Atmospheric Research at the University Corporation for Atmospheric Research, told Salon by email. "Most of the imbalance, over 90%, goes into the ocean and accordingly ocean heat content (OHC) provides a primary indicator of climate change, along with sea level rise. 2017 was the warmest year on record for the global OHC down to 2000 [meters] depth and the latest quarter (April to June) is the hottest on record. The heat fuels storms of all sorts and contributes to very heavy rain events and flooding."

He added, "Hurricanes are natural, but climate change is supercharging them! The observed increases of upper OHC support higher sea surface temperatures and atmospheric moisture, and fuels tropical storms to become more intense, bigger and longer lasting, thereby increasing their potential for damage. Sea level is also steadily rising, increasing risks from coastal storm surges. The damage and loss of life from such storms does not have to be disastrous, however, if there is adequate preparation."

"We have the options of stopping or slowing climate change from humans, and/or adapting to and planning for the consequences, but we are not doing enough of either," Trenberth concluded.

"The near record warmth is factor in terms of the rapid intensification of the storm and potential for extreme flooding," Mann told Salon by email. "That likelihood of this anomalous warmth is increased greatly by human-caused warming, as I noted day before yesterday on Twitter."

Mann added, "As I said yesterday on Democracy Now, Florence is a triple threat: coastal flooding, wind damage and inland flooding, and each of these attributes is impacted by climate change, through sea level rise, warmer ocean temperatures and as a result stronger winds and more rainfall. Finally, the climate change/ jet stream connection may play a role with the stalling of the storm which, like Harvey, is the real threat from the standpoint of inland flooding. Finally, there is the rapid intensification which is tied to extreme warmth like what we’re seeing."

Mann also referred Salon to an editorial he wrote for The Guardian last year about the connection between global warming and Hurricane Harvey, one that he says is applicable to Hurricane Florence as well.

Finally, the more tenuous but potentially relevant climate factors: part of what has made Harvey such a devastating storm is the way it has stalled near the coast. It continues to pummel Houston and surrounding regions with a seemingly endless deluge, which will likely top out at nearly 4ft (1.22m) of rainfall over a days-long period before it is done.

The stalling is due to very weak prevailing winds, which are failing to steer the storm off to sea, allowing it to spin around and wobble back and forth. This pattern, in turn, is associated with a greatly expanded subtropical high pressure system over much of the US at the moment, with the jet stream pushed well to the north. This pattern of subtropical expansion is predicted in model simulations of human-caused climate change.

More tenuous, but possibly relevant still, is the fact that very persistent, nearly “stationary” summer weather patterns of this sort, where weather anomalies (both high-pressure dry hot regions and low-pressure stormy/rainy regions) stay locked in place for many days at a time, appears to be favoured by human-caused climate change. We recently published a paper in the academic journal Scientific Reports on this phenomenon.

Right now the issue of hurricanes is a very pressing one for President Donald Trump. In addition to the fact that he has denied climate change and pulled America out of the Paris climate accord, the president has also been harshly criticized for his botched response to Hurricane Maria. While his attitude toward climate science comprises part of these criticism, he has also been under fire for allegedly transferring nearly $10 million from FEMA to ICE, as well as for the racist motivations behind his lack of concern for the situation in Puerto Rico.

It remains to be seen whether Trump's strategy for protecting the east coast from Hurricane Florence will be more effective than his tactics for responding to Hurricane Maria.

Matthew Rozsa discusses the dangers of the current war on science