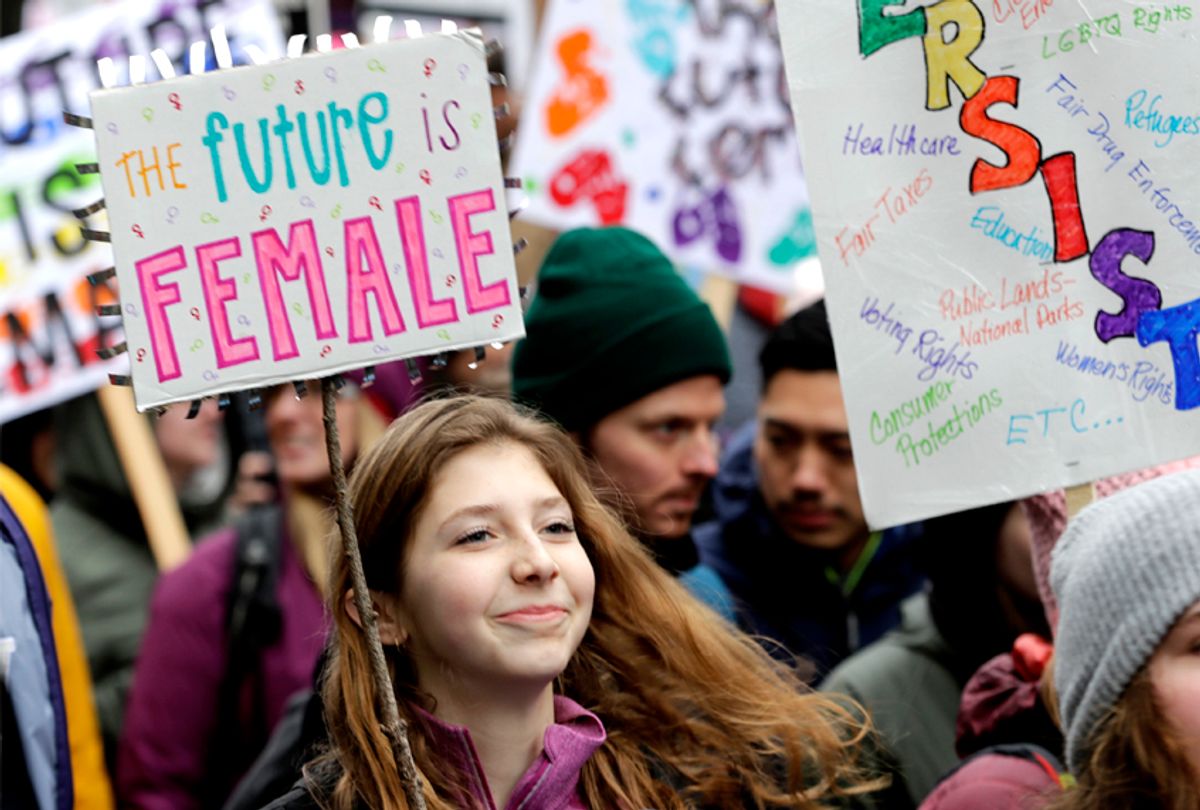 In the era of Donald Trump, the eyes of the nation's progressives have turned to teenagers. After all, while the majority of Americans over 45 that voted for Trump, the younger down the voting rolls one goes, the more likely it is that people cast their ballots for Hillary Clinton in 2016. There's hope that the current crop of high school and middle school kids will be even more woke, and there are hints that might be the case, as we see with the rallies for gun sanity in the wake of the Parkland school shooting and the evidence that modern teens accept LGBT identities far more widely than their elders could have imagined at that age.

Amid that optimism, however there are serious concerns that on issues of gender equality, young people aren't moving forward nearly at the pace that they might be on other issues. A new survey commissioned by Plan International USA and conducted by Perry Undem, shows that American teenagers today hold some distressingly retrograde views on the roles of men and women, especially in heterosexual relationships. Sadly but perhaps not surprisingly, boys are more likely to have inegalitarian views than girls, even though boys themselves also suffer from the effects of gender stereotyping.

This survey of young people aged 10 to 19 found that when respondents were asked broadly whether they believe in gender equality, they were quick to say yes. But that's an empty, feel-good answer — even Donald Trump would probably understand the "correct" answer to that question. When the questions got more specific, however, it turns out there are some troubling areas, especially when it came to boys.

"We’re just not going to somehow 'age out' gender inequality in this country," said Tessie San Martin, the head of Plan International USA, on a press call. "Young people internalize gender roles from a young age, and those views are remarkably traditional and durable."

For instance, when asked about traditional gender roles, as opposed to women having equality in public life, 21st-century kids had surprisingly 20th-century views. Nearly two-thirds of teen girls agreed that there should be "equal numbers of men and women who are leaders in work, politics, and life," but only 51 percent of boys were willing to agree. On the home front, boys got even more traditional, with 59 percent saying they were "more comfortable" with women having the responsibility for home and family, while 54 percent of girls envisioned more egalitarian roles in the home.

The survey also found, for teenagers, that sexism was also linked to race and ethnicity. Seventy percent of black respondents and 65 percent of Latino kids said they wanted equality in the public sphere, but only 53 percent of white kids agreed.

The kids in this survey were even more conservative than adults in a previous Perry Undem survey. Only 30 percent of adults surveyed in 2017 were more comfortable with traditional gender rules, a full 24 points fewer than the kids. Part of this may just be a result of what kids are seeing at home. Some parents espoused egalitarian views and some did not, but large majorities of the kids said their mom did more of the cooking, cleaning and child care than their dad.

With so many kids holding sexist views, it's not surprising to hear them deny that sexism is real or that it's really a problem. One in five girls believed girls had equal opportunities now, but 44 percent of boys assured the survey that was so. Slightly over half of girls ages 14 to 19 said that sexism is a serious problem, but only 19 percent of boys agreed.

Undem looked at correlations between these answers and found that having more traditional (read: sexist) views on women's roles was more likely in kids who had Republican parents or were exposed to sexist attitudes at home. For boys, higher levels of exposure to online pornography also correlated with seeing women as less worthy of equality in the workplace. For kids of both genders, playing with gendered toys when they were younger was linked to more traditional attitudes about the roles and values of men and women when they got older.

In the era of #MeToo and discussions about consent, abuse and harassment, it's no surprise that the researchers asked a number of questions about how kids feel about these issues. Interestingly, both boys and girls grasp pretty readily that sexual harassment is about power, and not just men "losing control" around pretty women, as many adults who are making excuses like to argue. Eighty-five percent of girls and 71 percent of boys ages 14 to 19 agreed that sexual harassment and assault is rooted in the "desire for power and control over girls."

The question, then, is whether that bothers them. Boys, when asked if they supported education on consent issues, were more indifferent to the issue than girls. Large majorities of girls said they wanted education on a girl's right to say no and how to tell if a potential sexual partner is uncomfortable, but only 46 percent of boys agreed.

The gender and racial gaps found among teenagers on this survey echo research released earlier this year from PRRI, looking at Americans aged 15 to 24. That survey found that while 63 percent of young women believe that women face gender discrimination, 56 percent of young men say women have equal opportunities. The difference is even more stark among young white men, with a whopping 65 percent denying the existence of sexist discrimination.

“Girls are often encouraged to delegitimize and minimize their experience, and to push away those feelings of injustice," said Malika Dia, a 19-year-old student at Johns Hopkins University and a youth adviser to Plan International. She said she hoped this data can help bolster young women who want to speak out, but feel pressure "not to be dramatic, as girls are assumed to be."

What the survey found above all is a strong link between the messages kids get at home and from the media and their attitudes about gender. Boys who had dads who made sexist jokes were more likely to have sexist attitudes towards women. On the other hand, both boys and girls who were exposed to feminist or egalitarian ideas, even just by having more gender-neutral toys as kids, tended to be less sexist as adolescents. As usual, the takeaway is that none of this is biological or inevitable. Kids can be better and do better, if they're taught to believe that equality is possible, desirable and healthier for everyone.