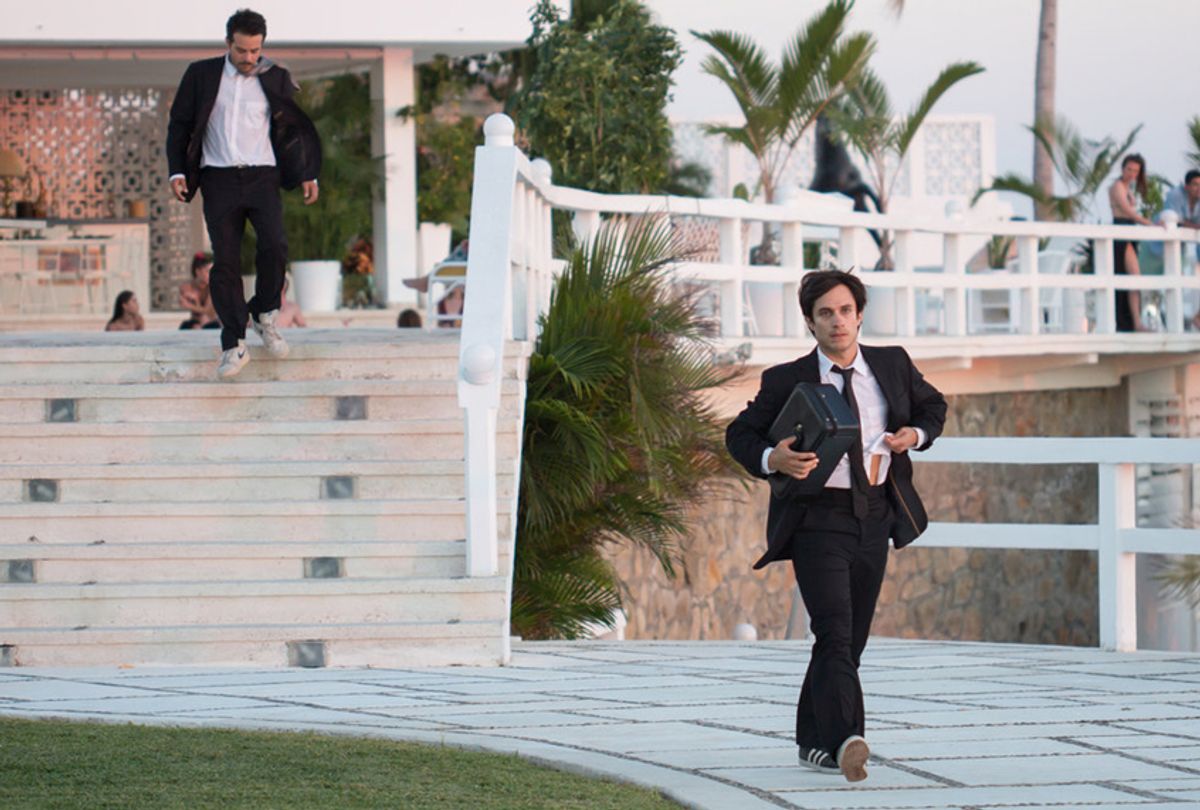 As Juan, a bored college dropout in the fantastic and stylish true crime film, “Museo,” Gael García Bernal projects an impish charm that is irresistible. He is seductive and convincing, but his con artistry suggests he has a sense of control that actually eludes him.

Early in this mesmerizing drama, written and directed by Alonso Ruizpalacios, (whose debut feature, “Güeros,” Bernal executive produced), Juan convinces his buddy Benjamin Wilson (Leonardo Oritzgris) to play “William Tell.” The outcome of this game reveals much about both characters. Shortly thereafter, Juan enlists Wilson’s assistance to steal a collection of priceless artifacts — masks, jewelry and gold — from the National Museum of Anthropology in Mexico City.

"The museum is where you go when you’re a kid. They take you there and it is one of the most important museums in the world. You see things from cultures that don’t exist anywhere else," Bernal told Salon. "It’s fascinating to observe things and reflect on those times and that encounter. It’s a story of America — the continent."

"Our approach to our past history and cultures in Mexico — and you can open it up to all of America — is that we come from this place. This [film] is the story of a point of departure from this place," he continued. "All of these things that appear in this museum are yours and yours to take care of. Nobody can own it. You are connecting to something that is everyone’s; it’s all of humanity’s. I have a strong connection to them. We are taught to take care of that."

The film, set in 1985 when the actual events took place, follows the burglary and its aftermath. The friends try to fence the goods, which jeopardizes their relationship. Their actions also raise questions about the ownership and value of the objects they stole.

Dubbed “a replica of the original,” “Museo” explores Juan’s motivations, which are both scheming and self-destructive. Bernal gives a consummate performance, making Juan arrogant, mischievous, desperate, and even sympathetic. He is such a shit-stirrer, Juan indirectly tells his cousin the truth about Santa Claus.

On the phone from the Toronto Film Festival, Bernal spoke with Salon about Juan and “Museo,” Mexican cinema, and what he values.

How did you hear about this true story and get involved in this project?

I heard about it through Alonso [Ruizpalacios]. He’s a good friend of mine, and I admire his work a lot. I helped support his film “Güeros.” He is an interesting filmmaker with a great take on things. We talked about possibility of doing “Museo” and me acting in it. The story is fascinating, but it’s more the way you tell it — the bigger issues interest me.

“Museo” raises an important issue about ownership of artifacts. What are your thoughts about Frank Graves’s (Simon Russell Beale) comment in the film, “There is no preservation without plunder?”

There’s an interesting conversation that goes on around that issue, “Looting is what makes preservation possible.” I would argue on both sides — for the sake of argument — that there are different sides of the equation. But I don’t understand the need of owning something. I don’t need to own stuff. Owning is being responsible and taking care of things. I love to take care of a plant, but I don’t need to own objects. So, the point of view I stand on is the other side of it: Everything should be everyone’s.

There’s a moving scene where Juan buries a necklace at the base of a pyramid as an offering to the Mayans. Why do you think he did that? Was it guilt or for good luck?

It may have been for a more deep, spiritual, or profound reason. It was the offering he had to do to protect those pieces. It’s an interesting twist that the [burglary] takes. They were going to sell [the objects] and now they are going to protect them. That’s based in real life. They found all the pieces, so people are wondering: Why did they keep them and take care of them? It was interesting to ponder and interpret that.

You have played heroes and villains in films, but Juan, who is both, is more of a loser. He’s desperate and insecure. How did you sympathize with his character?

Because of that ambiguity and those contradictions! There’s something very human about Juan, and I worked with emotional empathy for him and his journey. I guess I approached the character knowing I could never do what he did, or make those decisions, but trying to understand why the hell…. The ultimate question is: Why did these kids do what they did? That’s something that is on everyone’s mind. Why did they do something so stupid and so impossible? Why spend so much energy? That’s crazy! That mystery attracted me and made me feel empathy.

What about Juan’s family? He has a complicated relationship with them. Is he the black sheep?

He has that kind of destructive nature. We see him taking the most uncomfortable route and making the worst decisions. That’s something that comes into play especially when the resolution comes along.

What observations do you have about Juan’s friendship with Wilson?

There are a few “action” scenes in the film—from crawling through the museum vents, to driving without lights, to a pair of fight scenes. Do you do your own stunts?

Yeah. [Laughs.] I like doing them. We’re not jumping off buildings, so I can do these things!

Can you talk about Mexican cinema, and your role in supporting that as both an actor and a producer of films like “Museo” and “Güeros” as well as “Desierto,” among others?

I spend the most time and have my most creative moments in Mexico and Buenos Aires. There are a lot of friendships and camaraderie in Mexico among filmmakers. We help each other out. There is a system for how we make films, and the possibility to do whatever we want. We can make the film we want, and that’s fantastic, so there is a lot of creative freedom. I don’t want to spoil it by structuring it or establishing a manifesto or an agenda around it. Mexico is a film-going country. It’s the fourth biggest movie-going country in the world. We go to the cinema a lot. There is a strong film culture dating back to the 1920s. It’s a fortunate moment and I’m lucky to have been born there and make films there. If I decided not to do films in Mexico, it would have been a waste of my identity.