After the feds inexplicably shut down the Sunspot Solar Observatory, those who work there say it's nothing spooky 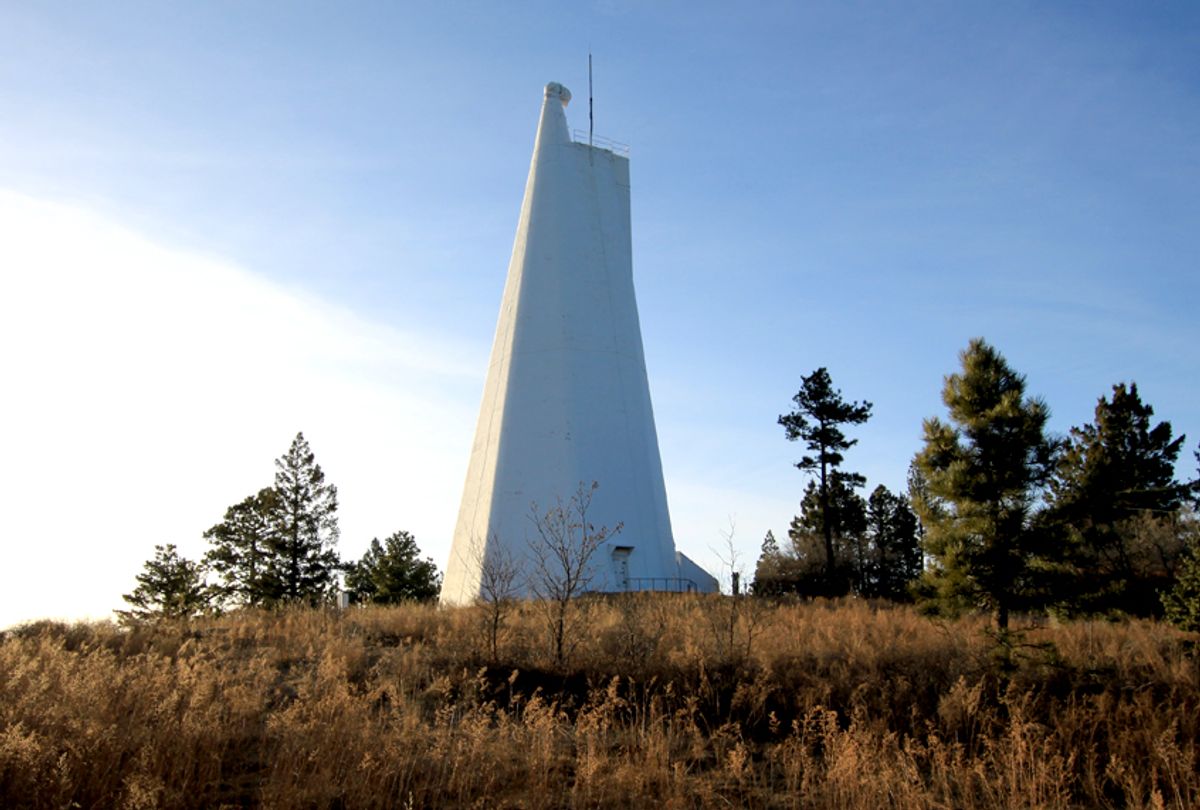 Sunset over the Dunn Solar Telescope in Sunspot, NM. Part of the National Solar Observatory at Sacramento Peak. (Wikimedia)
--

When, last week, the federal government suddenly and inexplicably closed the Sunspot Solar Observatory in southern New Mexico, conspiracy theorists went wild. The fact that the Federal Bureau of Investigation (FBI) — resident agency of fictional paranormal investigators Fox Mulder and Dana Scully in "The X-Files" — was involved in the closure only added fuel to the conspiratorial fire. A quick YouTube search will confirm that the paranoiacs have numerous theories about what could be going on at the National Solar Observatory facility. The government nor the observatory have released any official explanation.

Since conspiracy theories tend to reflect the zeitgest, prominent theories include something to do with extraterrestrials or something to do with Russian espionage. But if you were hoping for aliens, I have bad news: those close to the situation tell Salon the closure is not related to any mysterious sightings or transmissions.

The saga began to unfold on September 6, when authorities unexpectedly closed and evacuated Sunspot  Solar Observatory. Sunspot Solar Observatory is managed by a consortium of universities that provide funding to operate the telescope and adjoining visitor’s center. AURA (The Association of Universities for Research in Astronomy) is a big site, tens to hundreds of acres, McAteer explained, and the observatory is used to study the sun in very specific ways.

McAteer said while the reason behind the closure is still unknown, he does not believe it is as strange as some believe.

“AURA deciding to close it is not an unusual event to me and I’m not going to jump to any unnecessary speculation,”  McAteer told Salon. “They [AURA] made the decision to close the site based on an internal decision, based on whatever they make their decisions on, and as they often make decisions to close remote sites this is not an uncommon thing to do.”

Alamogordo Daily News first reported the news on Sept. 7, when the observatory closed citing a “security issue” at the facility. Shari Lifson, a spokeswoman for AURA, said the closure was their decision.

The fact that the Federal Bureau of Investigation is involved is perhaps the most mysterious aspect of the observatory's closure. Oddly, county sheriff Benny House said the Otero County Sheriff’s Office was asked to stand by.

“The FBI is refusing to tell us what’s going on,” Sheriff House told the paper last week. “We’ve got people up there (at Sunspot) that requested us to standby while they evacuate it. Nobody would really elaborate on any of the circumstances as to why. The FBI were up there. What their purpose was nobody will say.”

He said he has a lot of unanswered question about what occurred at Sunspot.

“But for the FBI to get involved that quick and be so secretive about it, there was a lot of stuff going on up there,” House added. “There was a Blackhawk helicopter, a bunch of people around antennas and work crews on towers but nobody would tell us anything.”

But if aliens aren't involved, what about espionage, the American bugaboo du jour? McAteer said the observatory, despite being located near  U.S. Air Force's Holloman Air Force Base and the U.S. Army's White Sands Missile Range, could not be used for spying.

“You don’t look through,” McAteer told Salon. “It it is not a pair of binoculars, you don’t use it for communicating. It is not a radio, it just receives light from the sun.”

Seth Shostak, Senior Astronomer at the SETI (Search for Extraterrestrial Intelligence) Institute, told Salon this ordeal has indeed piqued his interest, but that it is unlikely aliens.

“The real thing is that you have the elements here that this is an observatory, it is looking at the sky and now some branch of the government that does have secrets is concerned about something there,” Shostak said. “Immediately people jump to this conclusion — the public always assumes when something is unexplained on Earth, aliens are to blame.”

“If this happened at a fast food restaurant, would they blame it on aliens?” he asked.

Shostak speculated the government's seizure of the facility could possibly have to do with observing satellites. In the event that aliens do make an appearance on Earth, it is unlikely the government would really try and keep it a secret.

“Twenty years ago we picked up a signal that might have been an alien transmission, and they didn’t try to shut anything down or keep anything secret,” he said.