Trump campaign chairman pleads guilty and is cooperating with Mueller 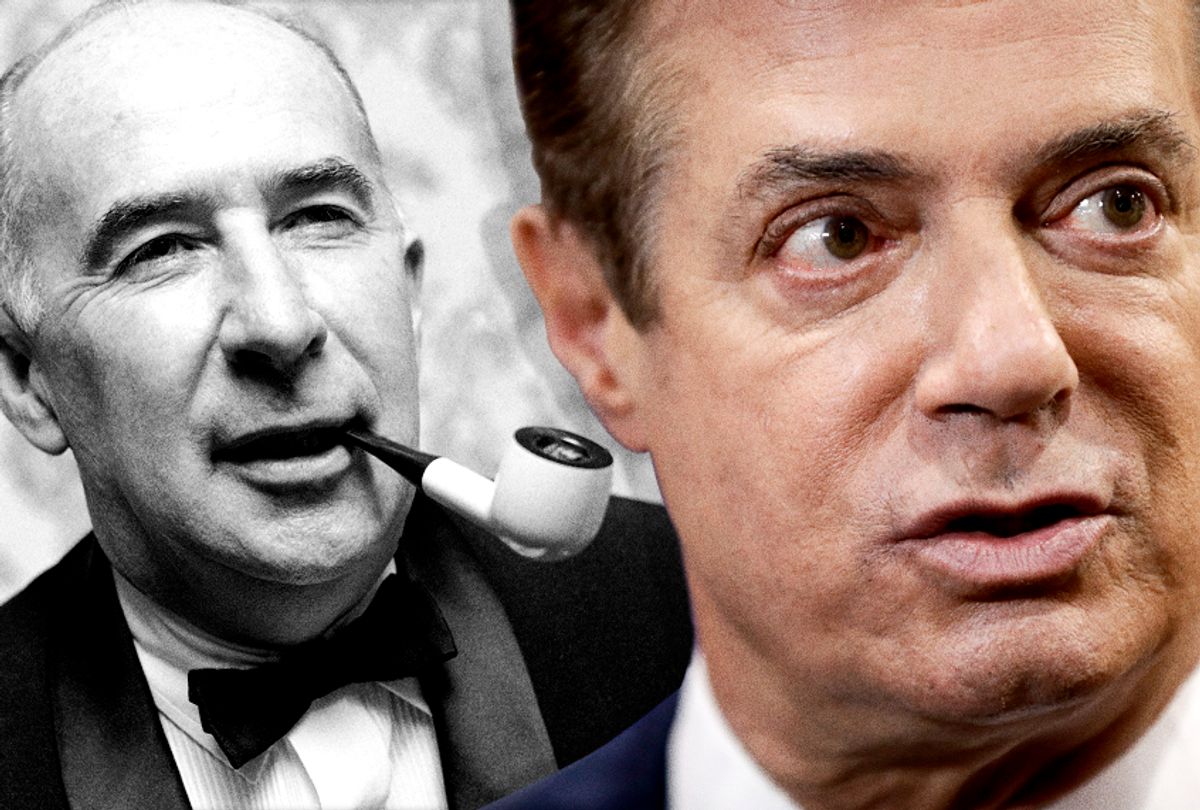 Now that Paul Manafort has plead guilty to reduced charges brought in Washington federal court by Special Counsel Robert Mueller in what was described as a “cooperation agreement,” it’s time to recall what a greasy, grubby, grasping, greedy grifter he is.

Manafort pleaded guilty to one count of conspiracy against the United States, and one count of conspiracy to obstruct justice by attempting to tamper with a witness against him. He will forfeit to the government four houses and two bank accounts, a total of $46 million.  As part of the plea agreement with Mueller, he stood up in court and admitted to the charges in a new “criminal information” filed against him.

Reading the 76 pages of charges against Manafort is like reading an international sequel to “The Godfather.” Money laundering, illegal lobbying, tax evasion, perjury, conspiracy to get others to commit perjury, movement of tens of millions of dollars through offshore bank accounts in Cyprus and St. Vincent and the Grenadines. Involved with Manafort were his partner and deputy, Rick Gates, and one Konstantin Kilimnik, a former Russian intelligence agent also charged in the conspiracy and currently on the lam in Moscow under the protection of none other than the Russian president, Vladimir Putin.

Manafort ordered $5,434,793 to be wired from his banks in Cyprus and the Grenadines to pay for home improvements by a company in the Hamptons on Long Island.

He ordered $1,661,201 to be wired from Cyprus, the United Kingdom and the Grenadines to a “lighting and home entertainment company” in Florida.

He ordered $1,034,350 to be wired from Cyprus to an antique rug gallery in Alexandria, Virginia.

He ordered $849,216 to be wired from Cyprus and the Grenadines to a men’s clothing store in New York City.

He ordered $655,500 to be wired from Cyprus to a landscaping business in the Hamptons.

He ordered $623,910 to be wired from Cyprus to an antique dealer in New York City.

He ordered $432,487 to be wired from Cyprus to a contractor in Florida.

He ordered $255.685 to be wired from Cyprus, the U.K. and the Grenadines to a second landscaper in the Hamptons.

He ordered $163,705 to be wired from Cyprus to make payments in connection with not one, not two, but three Range Rover SUVs.

He ordered $125,650 to be wired from Cyprus to a contractor in Virginia.

He ordered $112,825 to be wired from Cyprus to a home entertainment company in the Hamptons.

He ordered $520,440 to be wired from Cyprus to a clothing store in Beverly Hills.

He ordered $500,000 to be wired from Cyprus to a so-called “investment company” in the United States.

He ordered a total of $66,000 to be wired from Cyprus for property management and “housekeeping” in Florida and the Hamptons.

He ordered a total of $6,699,500 to be wired from Cyprus for the purchases of houses and a condo in New York and Virginia.

He ordered a total of $13,000,000 to be wired from Cyprus to several companies he owned in the United States as what prosecutors called “purported loans.”

Paul Manafort stood before a judge in Federal Court in Washington D.C. yesterday and admitted ordering money to be sent from banks overseas to pay for clothing, art, rugs, cars, TV’s, sound systems, home improvements, cars, landscaping and houses in the United States. Who the hell pays over $900,000 to have their grass cut and hedges trimmed, even in the goddamned Hamptons? Who pays $1.4 million over a period of a few years on clothes, even if one garment was a $15,000 ostrich skin jacket? Who the fuck needs three Range Rovers and a Mercedes?

The “criminal information” filed against Manafort is a wonder of inexplicable, gaudy excess, but that wasn’t the key part of his appearance in court yesterday. No, that came when a single word escaped from the mouth of the prosecutor representing Mueller’s office in court. That word was “cooperation.”

Manafort’s guilty plea yesterday includes cooperation with Mueller that will involve knowledge he has gained over the years 2006 to 2017.  He will have to answer truthfully every single question Mueller’s investigators put to him about everything he knows. During one of those years, 2016, Paul Manafort was Donald Trump’s campaign chairman.

In holding that job, he joins a very, very short list of presidential campaign chairmen who have been found guilty of committing felonies and have served time in federal prison. The other sterling individual on this distinguished list is, of course, John N. Mitchell, the former attorney general of the United States who resigned that position in 1972 to chair the presidential campaign of Richard M. Nixon.

Mitchell was charged in connection with what became known as the Watergate scandal, was found guilty of conspiracy, perjury, obstruction of justice and was sentenced to two and a half to eight years in prison. He served 19 months before being released for medical reasons. Evidence obtained from the Nixon White House taping system proved that Mitchell had been involved in the planning and execution of the break-in at the Democratic Party headquarters at the Watergate office complex, and was involved with Nixon in covering up the crime.

Paul Manafort was chairman of the Trump presidential campaign in 2016 at the time agents of the GRU Russian intelligence agency hacked into the servers of the Democratic Party and stole emails involved in the Hillary Clinton campaign for president, as well as strategy documents for her campaign and campaigns for Democratic Party congressional candidates.

Two break-ins of the Democratic Party. Two campaign chairmen found guilty of federal crimes, including in each case conspiracy and obstruction of justice. Two campaign chairmen doing time in federal lockups. The presidential candidates were Richard Nixon and Donald Trump. The political party of both men? The Republican Party.

John Mitchell was the man in charge in 1972. Paul Manafort was the man in charge in 2016. He was campaign chairman when he and Trump’s son in law Jared Kushner and Trump’s son Donald Trump, Jr. sat down in Trump Tower in June of 2016 with four Russians, including a lawyer representing the Russian Crown Prosecutor, the man who was essentially Putin’s attorney general.

Here is an excerpt from the email sent to Donald Trump, Jr. setting up the Trump Tower meeting attended by Paul Manafort:

“The Crown prosecutor of Russia met with his father Aras this morning and in their meeting offered to provide the Trump campaign with some official documents and information that would incriminate Hillary and her dealings with Russia and would be very useful to your father. This is obviously very high level and sensitive information but is part of Russia and its government’s support for Mr. Trump.”

“Aras” referred to in the email was Aras Agalarov, a rich real estate developer in Moscow who was involved with Donald Trump in producing the 2013 Miss Universe pageant in the Russian capital.

Donald Trump Jr. responded to this email, “if it’s what you say I love it especially later in the summer.” Then he set up the meeting with the Russian lawyer Natalia Veselnitskaya who Trump Jr. was informed was bringing incriminating information on Hillary Clinton from the Russian attorney general. Trump Jr. then notified Trump’s campaign chairman, Paul Manafort, and the two men and Jared Kushner attended the meeting with Veselnitskaya and three other Russians.

But by June of 2016, Manafort had already been in regular contact with Konstantin Kilimnik, the former Russian intelligence agent with whom he had worked in the Ukraine and Russia. Two weeks after being hired by Trump and installed in his office at the Trump campaign in Trump Tower, Manafort was emailing Kilimnik and offering to set up “briefings” on the Trump campaign for the man Kilimnik was then working for, Oleg Deripaska, friend and running buddy of none other than Vladimir Putin.

Only two months ago, Robert Muller filed another indictment in Federal court in Washington D.C. against 12 agents for the Russian intelligence agency, the GRU, for hacking into and stealing the Democratic Party’s emails and campaign strategy documents.

These things are connected: Paul Manafort, a man who spent a decade working in the Ukraine and Russia for crooked politicians and oligarchs, taking their filthy millions and moving it through offshore banks to pay for his obscenely expensive lifestyle in the United States. Konstantin Kilimnik, a former Russian intelligence agent who worked for Manafort over a period of years in Ukraine and Russia, who was in contact by email and during personal visits to the United States with Manafort when he was chairman of the Donald Trump for president campaign. And 12 Russian intelligence agents under indictment for stealing the Democratic Party’s campaign documents.

Manafort worked for years with the hideously corrupt former president of Ukraine, Viktor Yanukovych, who was ousted from power in 2014 and fled immediately to Russia where he remains under the protection of Vladimir Putin. Yanukovych was the leader of the pro-Russia Regions Party in Ukraine. His intelligence agency was in close contact with the Russian intelligence agencies controlled by Vladimir Putin. Manafort was an important employee of Yanukovych. If he didn’t come in contact with elements of both Ukrainian and Russian intelligence during this time, I’ve got a Manafort property to show you in Brooklyn that will soon be auctioned off by the Federal Government.

He’s dirty. Manafort was up to his ears in Russian oligarchs, Russian politicians, Russian money, and Russian intelligence agencies. He knows where Trump’s campaign bodies are buried, all of them.

Mitchell went down, and the man whose campaign he managed went down.

Manafort is going down, and the man whose campaign he managed is going down too. If you don’t believe me, watch Trump’s tweets this weekend. He knows it. Trump has been a greasy, grubby, grasping, greedy grifter all his life, and he’s running scared.