A new Renaissance? Not even close. The Enlightenment reverence of Bill Gates and Steven Pinker needs challenging 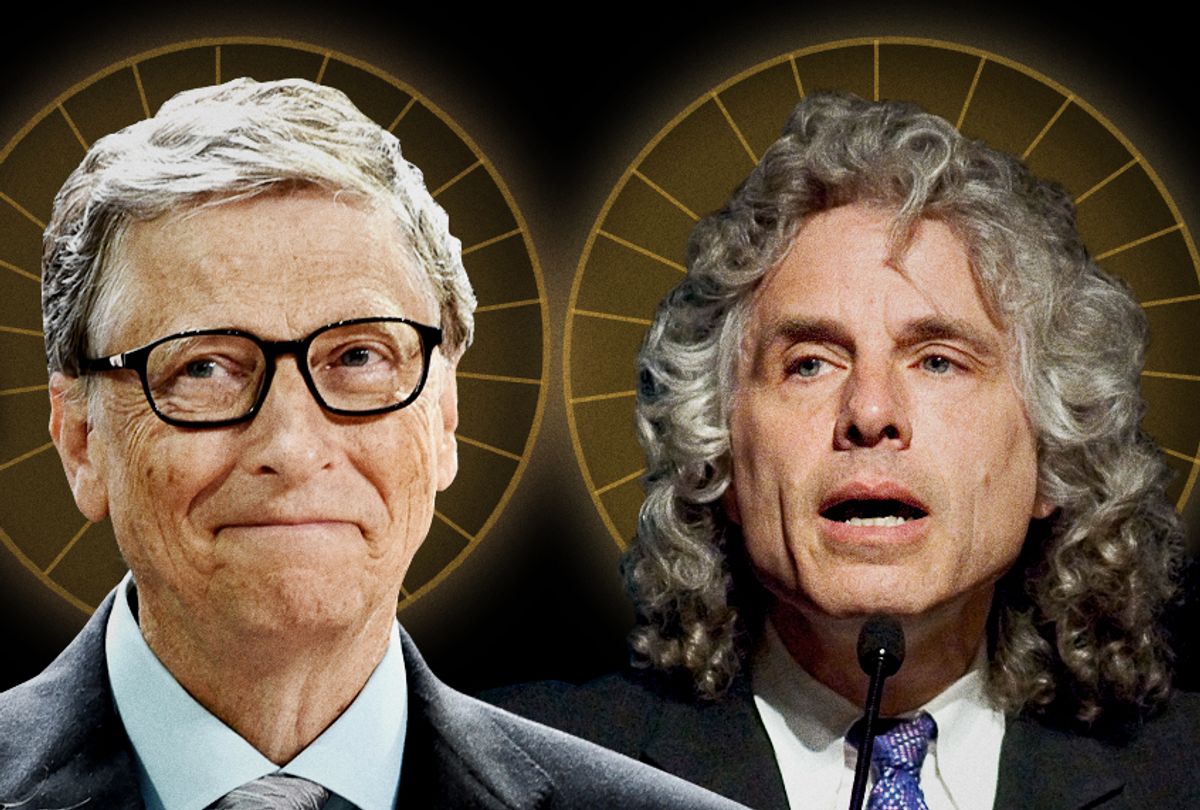 For Steven Pinker, author of the best-selling “Enlightenment Now: The Case for Reason, Science, Humanism, and Progress,” it’s the best of times—and I don’t mean because his book is selling so well. Pinker asserts that right now we live in the best of all worlds. Not only do we have technology at our fingertips that previous generations couldn’t have imagined, we also enjoy unprecedented degrees of freedom and health. The source of our bounty isn’t mysterious. We have the Enlightenment and its values to thank for it. Bill Gates is just one of the grandees to laud Pinker’s ode to the present. He has called “Enlightenment Now” “the best book Pinker's ever written,” and “my new favorite book of all time.”

In making his case for why everything is terrific and only getting better, Pinker provides dozens of graphs and statistics paired with short articles to document technological achievements and improvements for society. These exhibits for his case suggest that we are enjoying better health, greater safety, increased longevity, and more stable politics than ever before. This can bring some cheer to people drowning in depressing news from at home and abroad. Income inequality at the highest rate in decades? Not really, if you read Pinker. He can put it in perspective: it’s not that bad. But then you consult the 2018 World Inequality Report penned by Thomas Piketty and his 100 participating researchers, which finds inequality is getting worse (unquestionably in the U.S.) — and will, barring a major shift in course, continue to do so. The celebratory mood could also be soured by any of the latest examples of environmental devastation: for instance Florida's state of emergency issued for its revolting red tide of toxic algae, and the 267 tons of dead fish, manatees, turtles, dolphins, etc. that washed up on its beaches.

That scientific and technological advances are not the same as progress in human affairs goes largely unnoticed by Pinker. For him, the present is rosy and the future only better. We are the fortunate children of the Enlightenment, our prosperity bestowed not by a benevolent God, but by the power of reason and its primacy in our society.

It’s a neat equation that Pinker lays out, but as is often the case, the reality is more complicated. First of all, there are several versions of the Enlightenment, each emerging from a particular political, geographical, and philosophical home complete with its own debates and disagreements. There was a British, French, Scottish, Polish, German, and—at least in the mind of Catherine II—Russian Enlightenment. She corresponded with Voltaire, and welcomed Denis Diderot to stay for five months at her court in St. Petersburg, where she met with him almost daily. In Königsberg (now Kaliningrad, just one of the appropriated areas not given back after 1928 as Pinker claims they all were), dashing young Russian officers attended Kant's classes and listened, spellbound, to his lectures.

There was also a global component of the Enlightenment. It was possibly an early manifestation of globalization. American and European merchants, explorers, traders, conquerors, missionaries, diplomats and bureaucrats traveled with ideas and carried them to their foreign destinations. So the Enlightenment became known beyond the boundaries of the West. Several western thinkers took a serious interest in the languages and cultures of the East. For example, Gottfried Wilhelm Leibniz, the German polymath, corresponded for years with Jesuits working in China. He was on a hunt for a non-decimal system of 0 and 1, and researching “I Ching” hexagrams, which were unmistakably binary. He came to regard Chinese culture as sophisticated and advanced.

Our contemporary version of the Enlightenment evolved primarily based on the hegemony of the West, and more specifically on the Anglophone interpretation of it. Nation states developed relatively late, almost simultaneously with the new Enlightenment thinking in the late 17th and the 18th centuries. After the demise of Napoleon, Britain and then the rising U.S. became the leading global powers. They wielded their power over the narrative as much as they did over territory and people and the Enlightenment story they told was one that comported well with their imperial aims. As Winston Churchill wryly said, “History will be kind to me for I intend to write it.”

The Enlightenment became an intellectual justification and framework for colonialism and imperialism. So much so that John Stuart Mill opined about British imperial rule in India, “Despotism is a legitimate mode of government in dealing with barbarians, provided the end be their improvement.”

What others elsewhere thought or wrote fell by the wayside. Accordingly, the Anglo-American Enlightenment — and the post-WW II world order on which it was partially based — became, and still scramble to remain, dominant. If some public intellectuals of the early 21st century, such as Pinker, wish to revitalize the full-scale spectrum of Enlightenment thought they will have to take a good hard look and reappraise things honestly. Their unidirectional tale of an Enlightenment that led the world from a benighted misery to the heights of personal and social prosperity is due for an interrogation using the very tools of the Enlightenment that Pinker celebrates: reason, science, and humanism.

During the late 18th century, several thinkers launched a vigorous assault against imperialism, conquest, and appropriation on a global scale. Their arguments took aim at a hypocritical contradiction. Yes, the proponents of imperialism supported the concept of the universal “natural man,” who is seen as a generic example of all humans and entitled to his due rights, but they gave little thought to these rights when exercising their paternalistic and brutal political and economic domination. In the U.S., this mission of bringing light to the gloom was later parodied by Mark Twain in his 1901 essay, “To the Person Sitting in Darkness.”

In contrast, the anti-imperialists, including Diderot, Kant, and Herder, championed the equal dignity of all humans on earth, their original right to freedom, and to a life as beings—not as something generic to be shaped at will by colonial masters. Constructs of superiority and inferiority were resolutely rejected. These major contributors to the Enlightenment condemned imperial ambitions as unjust, dangerous, and impractical. Diderot, for example, even looks far into the future to tell the descendants of America's pioneers:

“Let the example of all the nations which have preceded you, and especially that of the mother-country, serve as a lesson to you. Dread the influence of gold, which … introduces corruption of manners and contempt of the laws. Dread too an unequal distribution of wealth, which yields a small number of rich citizens, and a multitude … plunged in misery. The tranquility of an empire diminishes in proportion to its extent.”

Much of this original anti-imperialist material began to disappear shortly after it was written. By the mid-19th century, when the zeitgeist had turned zealously imperial, it was semi-invisible and eventually was pushed into the shadows altogether. But in recent decades it has been rediscovered. As Sankar Muthu writes in his superb book “Enlightenment Against Empire,,” “A study of Enlightenment anti-imperialism offers a richer and more accurate portrait of eighteenth-century political thought and illuminates the underappreciated … interconnections between human unity and human diversity”

In addition to Kant and Diderot, Muthu explores Johann Gottfried Herder's (1744-1803) work in detail. It was Herder who called Europe’s voracious expansionism worldwide “the grand European sponging enterprise.” He was most indignant about parceling out the globe, of establishing colonies from Asia to Africa, about human trafficking, various kinds of exploitation, and of building worldwide trading and financial networks whose benefits flowed in one direction only.

In his Letters on the Advancement of Humanity, 1793–1797, Herder admonished against the cultural hubris that fueled empire building when he wrote, “There is no such thing as a specially favoured nation on earth . . . There cannot, therefore, be any order of rank . . . The culture of man is not the culture of the European, it manifests itself according to place and time in every people.”

Getting to know this man who is listed in the Stanford Encyclopedia of Philosophy as a thinker “of the first importance,” who “can claim to have established whole disciplines that we now take for granted” might open up new vistas. He practically invented cultural anthropology. And in his mind, the difficult relationship between human unity and cultural diversity reached new levels of insight and understanding. They do not need to be opposed to each other, but are intertwined, and can coexist.

Scientism and the Status Quo

At first glance, Pinker’s exultation of Enlightenment values may be seductive. Do we want to live in an unreasonable, anti-scientific world? Yet, it’s difficult to not see it as a bold defense of a status quo that is clearly not working. Its antiseptic version of the Enlightenment is one that admits no crucial anti-imperial and anti-colonial ideas. Scientific inquiry is a method, but it is not suitable as a dogmatic worldview. Theoretical physicist Werner Heisenberg,

Nobel laureate for his work in quantum mechanics, had little patience for the doctrine of “scientism” which only accepts strictly empirical evidence, “The existing scientific concepts cover always only a very limited part of reality, and the other part that has not yet been understood is infinite,” Heisenberg wrote. “It will never be possible by pure reason to arrive at some absolute truth."

I’m a reasonably skeptical optimist, but reading Steven Pinker's Enlightenment Now brings to mind a big box store crammed with sparkly merchandise. It also evokes a quip by J. Robert Oppenheimer, “The Optimist thinks this is the best of all possible worlds. The Pessimist fears it is true.”

Erika Schelby is the author of "Looking for Humboldt & Searching for German Footprints in New Mexico and Beyond."

Erika Schelby is the author of “Looking for Humboldt and Searching for German Footprints in New Mexico and Beyond” (Lava Gate Press, 2019) and “Liberating the Future from the Past? Liberating the Past from the Future?” (Lava Gate Press, 2013), which was shortlisted by the Berlin-based cultural magazine Lettre International. Schelby lives in New Mexico.