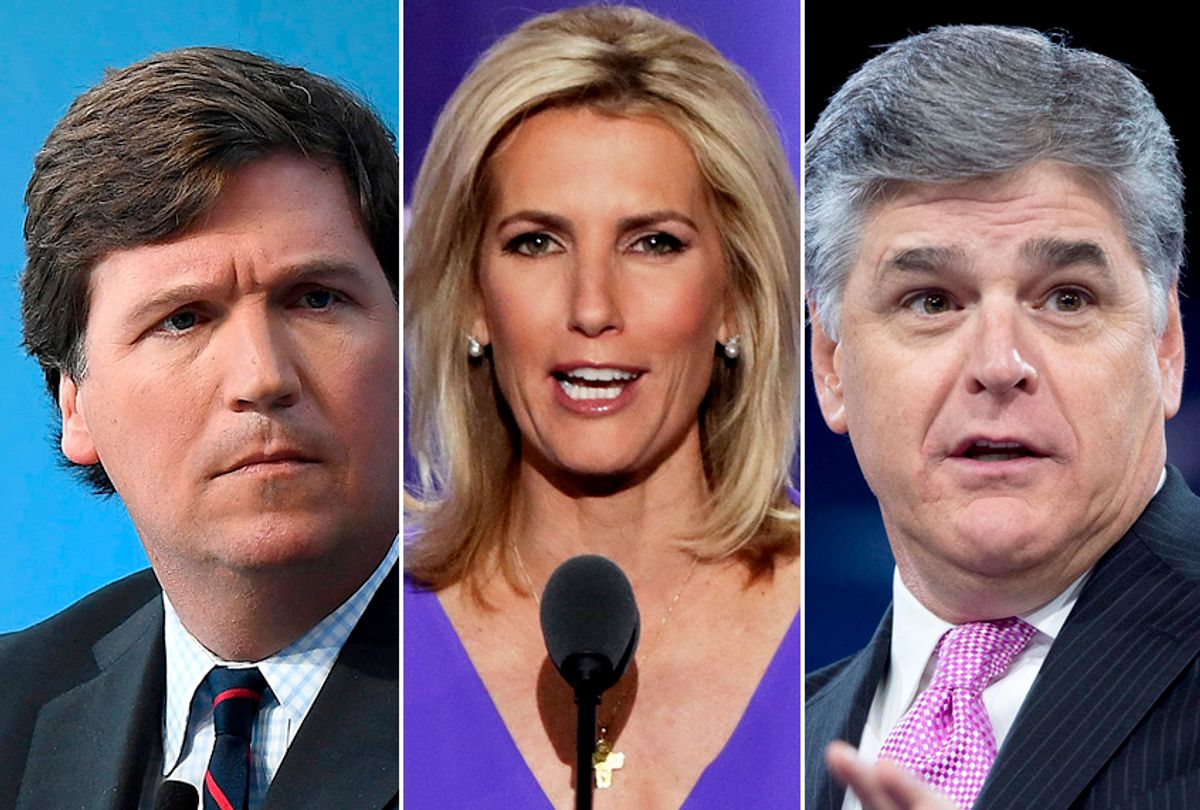 Christine Blasey Ford, a 51-year-old psychology professor, came forward Sunday night to publicly accuse Kavanaugh of trying to rape her in high school in the early 1980s. Earlier this summer, when it became clear that Kavanaugh would likely be nominated to the Supreme Court, Ford wrote a confidential letter to senior Democratic Sen. Dianne Feinstein of California describing the alleged abuse. Kavanaugh vehemently denies the allegation.

After Ford's story leaked to the press last week and reporters began to reach out to her, her ouster felt imminent. "Now I feel like my civic responsibility is outweighing my anguish and terror about retaliation," she told the Washington Post on Sunday.

"Ford claims that she decided to come forward at this moment out of quote – 'civic responsibility' – but the timing, suffice it to say, is curious," Ingraham said on Monday night's broadcast of "The Ingraham Angle." "Sen. Diane Feinstein had a letter from Ford detailing these allegations back in July, but she chose not to share it with the FBI or to raise it in 32 hours of public hearings, and of course, one hour of a private meeting with Kavanugh."

READ MORE: Brett Kavanaugh could be worse than you think: Here’s how he’ll gut environmental protection

When the possible sexual misconduct allegation started to swirl around in the media last week, Feinstein released a statement confirming that she received information from someone concerning Kavanaugh's nomination, yet she added that she was honoring the individual's request for confidentiality. Feinstein submitted the letter to federal investigators. The FBI then redacted Ford's name and sent the letter to be included in Kavanaugh's background file, which the White House sent to the Senate Judiciary Committee and made available to all senators.

"This all has the whiff of a political smear masquerading as a sexual assault allegation – one that 36 years later, let's face it, cannot either be proven or disproven," Ingraham said. "It's impossible to prove a negative, and questioning Ms. Ford and Brett Kavanaugh on this matter, it's unlikely to reveal anything new."

On his show, Carlson criticized Democrats for already making a judgement on Kavanaugh's guilt before Ford and he had even testified about the alleged assault. And even though "Tucker Carlson Tonight" aired a clip of Senate Minority Leader Chuck Schumer of New York affirming Feinstein's decision to keep Ford's allegation confidential on "The View," explaining that "when a woman is abused it is her prerogative as to how, where, why, when, if it all should come out," the Fox News host ignored the point. Instead, Carlson highlighted how "the Democrats have known about this allegation for weeks."

"They could have asked Kavanaugh about it anytime during his hearings. He was sitting right in front of them, and that's of course is what you would do if you cared about the answer to the question," Carlson added. "But they didn't. Instead, they waited and the point of course was to derail his nomination. The timing was political."

"The story doesn't have anything to do with justice actually or even with what Brett Kavanaugh might have done in high school," Carlson continued. "Underneath it all, anyone who lives in Washington can tell you: It's about abortion. Does anyone really believe this story would have surfaced if Brett Kavanaugh had pledged allegiance to Roe v. Wade? Of course, it wouldn't have."

The Fox News host warned his viewers that the story is "not about protecting women." "Don't buy that spin," he said. "The larger lesson though of this moment and actually the past two years is that the left will not abide losing power even temporarily."

Hannity similarly described the sexual assault allegation as the "Democrats' blatant attempt to derail Kavanaugh's nomination" on Monday night's broadcast of "Hannity." Like his co-workers, Hannity also emphasized how Feinstein had possessed this information concerning Kavanaugh since July but refused to question the judge about it.

The Senate Judiciary Committee plans to hold a public hearing Monday, which would allow both Kavanaugh and Ford the opportunity to testify about the sexual assault allegation.

Dershowitz' advice for Trump on SCOTUS.