Roger & me: Arguing with Roger Stone about a "white supremacist" hand signal 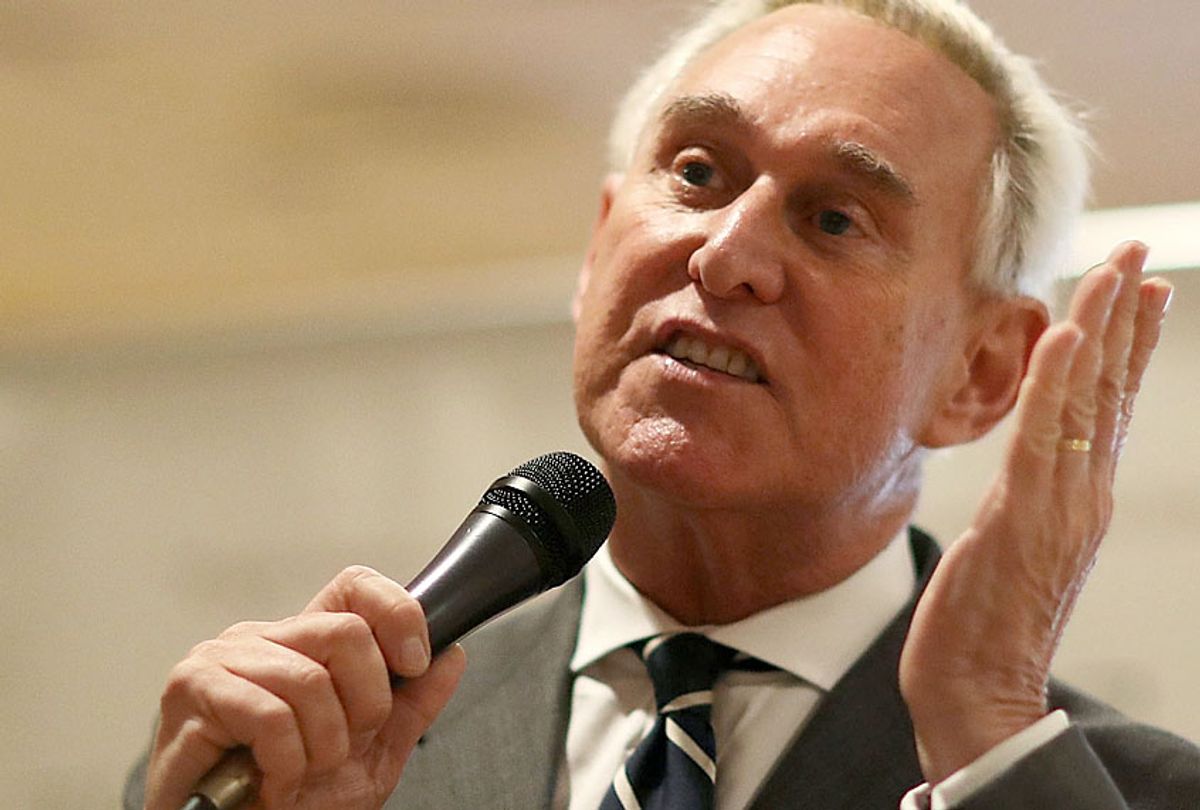 In April 2017, I interviewed Roger Stone for Salon Talks in videos where I discussed the sexual misconduct accusations against President Donald Trump, Stone's alleged ties to Russia and a number of other subjects. Since that exchange, Stone has declined multiple invitations to appear on camera with me, although he still responds to my emails occasionally.

My latest exchange with the legendary political consultant and dirty trickster -- whose career stretches from Richard Nixon to Trump, with whom he is particularly close -- concerned a photograph of Stone widely shared on Twitter. Stone was depicted alongside members of the Proud Boys, a pro-Trump men's organization often described as close to the alt-right, flashing a hand signal that is widely understood to signify support for white supremacy. Stone of course insisted it was nothing of the kind.

Here is the entirety of that email conversation, completely unedited save for the removal of various links that we sent each other and a couple of clarifications in square brackets. (The links have been embedded in appropriate places in the text instead of copied and pasted directly.) It took place on Monday.

Is that photograph of you flashing a white supremacist hand symbol genuine? If so, I have some thoughts about it as a Jewish person.

Stone: Bullshit. It is not consider a White Supremacist hand signal.

I am aware of this bogus claim.

It is a gesture which means OK-

Just for the record I reject White Suppression [sic], bigotry, anti-semitism, neo-nazis and the KKK as repugnant

I worked for the President who desegregated the public schools and instituted the policy of Affirmative Action in addition to founding the office of Minority Enterprise as well as desegregating the building trade Unions under the Philadelphia plan [that would be Richard Nixon], I also support the President who has brought Black unemployment to the lowest level ever.

Additionally I have petitioned the President for a posthumous Pardon for early Civil Rights leader Marcus Garvey as reported in the Atlanta Star and Newsweek.

Perhaps you missed this piece I wrote last week

Can you explain why you and the Proud Boys chose to flash the "OK" hand signal at this particular moment? Because that doesn't make a great deal of sense to me.

Stone: The gesture is used often by President Trump and is used to connote support for the president in photos of the proudboys nationwide,.

There are many many such photos.

We reject the claim that is a symbol of bi[g]otry and we specifically denounce White Supremacy.

Just because you say it's a White Supremacist symbols does not make it true.

Here is a link by the Anti-Defamation League explaining how it is a white supremacist hand signal. If you denounce white supremacy, does that mean you disagree with President Trump's defense of the alt-right protesters in Charlottesville?

Stone has not responded to that last question. If his avoidance of a second video discussion debate serves as reliable precedent, I shouldn't hold my breath. If he answers, this post will be updated, and the invitation to return to Salon Talks remains open.

Ironically, the link that I provided Stone offered a comparatively mild assessment of the hand signal. It is not one I fully agree with, as I'll explain in a moment, but it is notable that Stone wasn't seem willing to address even this quasi-sympathetic analysis. Its author writes:

Has the simple thumb-and-forefinger “OK” hand gesture become a common white supremacist hand sign? Not quite, but it has become a popular gesture used by people across several segments of the right and far right — including some actual white supremacists — who generally use it to trigger reactions, or what they would describe as “trolling the libs.”

It goes on to detail the origins of the gesture.

The “OK” hand gesture originated as one of these hoaxes in February 2017 when an anonymous 4channer announced “Operation O-KKK,” telling other members that “we must flood Twitter and other social media websites…claiming that the OK hand sign is a symbol of white supremacy.” The user even provided a helpful graphic showing how the letters WP (for “white power”) could be traced within an “OK” gesture. The originator and others also suggested useful hashtags to help spread the hoax, such as #PowerHandPrivilege and #NotOkay. “Leftists have dug so deep down into their lunacy,” wrote the poster, “We must force [them] to dig more, until the rest of society ain’t going anywhere near that s***.”

The Anti-Defamation League goes on to describe how, although the "Operation O-KKK" campaign fizzled out the first time around, it has seen a recent resurgence.

Over the year and a half since the original hoax campaign began, ADL has tracked its usage by a variety of figures on the far right, including some well-known white supremacists, though it seems to be even more popular among the so-called alt lite. Use of the “OK” gesture  has spread beyond the far right and can now also be found within the broad community of mainstream Donald Trump supporters — some of whom seem to have no idea of its origins.

Even though its usage has expanded and evolved, it still seems primarily intended to trigger or troll people on the left and cause them to react, although some white supremacists have also used it — generally jokingly — among themselves.

Am I implying that Roger Stone is a white supremacist? Emphatically not. I can't speak to his views on race, but I have no evidence to support such an accusation.

But you don't have to be a white supremacist to be guilty of enabling racism.

I don't believe Stone is telling the truth when he says that he and the Proud Boys used that signal without realizing how it would be interpreted. The purpose of the signal, as the ADL put it, is to "troll people on the left and cause them to react." That much he surely understands.

Considering that there are serious questions about Trump's views on racial matters, attempting to "trigger" liberals into believing you hold white supremacist views is not an innocent, puckish action. It is, at best, an effort to minimize legitimate concerns about racism and at worst a way of expressing covert sympathy for those who hold those views.

President Trump, after all, launched his campaign for the White House by suggesting that undocumented Mexican immigrants were rapists and drug dealers. Reliable sources indicate that he referred to Haiti and the nations of Africa as "shithole countries," and he unquestionably enacted a travel ban aimed at Muslim countries. Trump's administration has ripped Hispanic children away from their parents, and showed gratuitous neglect of American citizens in distress after Hurricane Maria. Most notably, he has pandered to the explicit racists of the alt right on a number of occasions, including his infamous defense of protesters in Charlottesville when he claimed there was "blame on both sides" and "very fine people on both sides."

In that context, this hand signal, though dismissed as a trolling tactic by those who use it, has become the very thing it claims not to be -- a white supremacist gesture.

Thanks to the efforts of 4chan trolls, flashing that gesture makes clear that you are willing to employ imagery associated with white supremacy for your own purposes. Pepe the Frog was not intended by its creator to be a hate symbol, but has become one through appropriation by the far right. So too with the "OK" signal — when used in an obviously political context — which now clearly aids and abets racial hatred.

I suspect that Stone knows all this, even if he'll never admit it. He's welcome to come to our studio and explain why I'm wrong.

The many evasions of Roger Stone