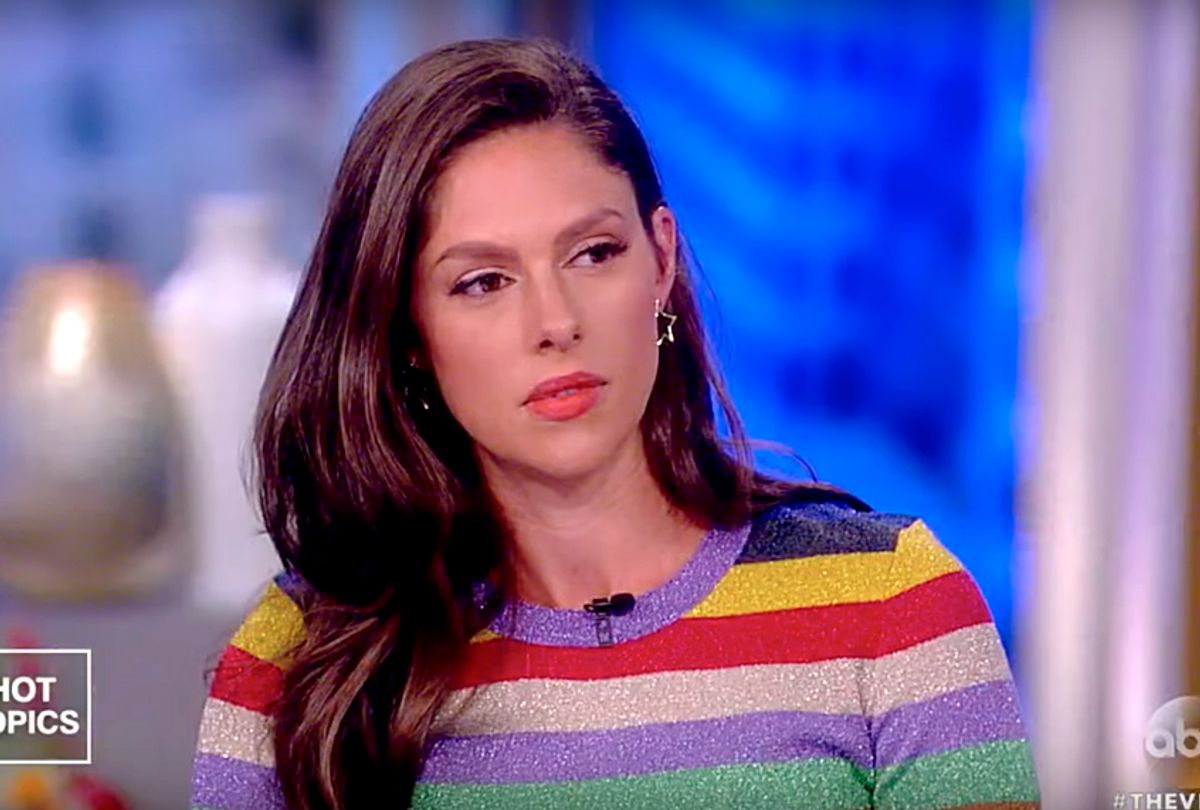 “The View” co-host Abby Huntsman insisted that Brett Kavanaugh should be presumed innocent until proven guilty — but she argued against an FBI investigation that might gather evidence to show he tried to rape a girl as a teenager.

The conservative Huntsman said the burden of proof was on Christine Blasey Ford, who accused Kavanaugh of sexually assaulting her at a high school party, when she and the Supreme Court nominee testify Monday before the Senate Judiciary Committee — but her co-hosts disagreed.

“Why would they rush this process for somebody that is not only going to have a lifetime appointment — he’s only, I think, 53, and could be on the bench for 40 years — could change the dynamic of the court and change our judicial rulings for the next couple of generations?” said co-host Sunny Hostin. “It just doesn’t make sense to go rushing it?”

Huntsman insisted due process should apply to the confirmation hearing, and complained that Hostin had already made up her mind — but co-host Joy Behar dismissed her argument as ridiculous.

“This is the point of public opinion,” Behar said. “This is not a real court.”

Hostin said the allegations Ford made against Kavanaugh were detailed, credible and significant, and she said the FBI should reconsider its decision not to investigate.

“I think they are more significant than we are even covering,” Hostin said. “It showed premeditation.”

Huntsman disagreed, saying the only thing about the rape claims that should be investigated by the FBI was the leak of a letter from Ford detailing her allegations.

“I disagree with you guys, I don’t think we need to launch an investigation today because we’re going to hear from them hopefully on Monday,” Huntsman said. “I’m so glad it’s a public hearing because I think the public needs to hear from both sides.”

She said Kavanaugh’s confirmation should rest on the credibility of Ford’s testimony next week before the Senate Judiciary Committee — which she trusted to run the process fairly.

“He’s saying he wasn’t at the party,” Huntsman said. “I think when we hear from her, if she is even slightly convincing, he is going to be a really tough situation.”

Behar said Sen. Orrin Hatch, R-Utah, and other GOP senators would rig the process to push the anti-choice Kavanaugh onto the court, but Huntsman insisted they would act in good faith.

“There is a narrow vote right now,” Huntsman said. “If you have Lindsey Graham — even the Democrats who are a swing vote, Joe Manchin — Susan Collins, who come out and say they are concerned about this. Lindsey Graham was asked by a reporter yesterday, and he said, ‘I would have a hard time putting somebody on the court that I thought tried to rape somebody.'”

“He is already saying if she is even the slightest bit convincing, he is going to be a tough place to vote in his favor,” she added. “I’m saying don’t do the investigation until we have heard from them on Monday, you may not even have to do an investigation at that point. He may not have the votes at that point.”

Host Whoopi Goldberg said the process was already fatally tainted by politics, and she said the rush to a vote would not allow all the facts to come out.

“Everybody is already taking sides,” Goldberg said. “So the only neutral party in all of this, in my opinion, would be the FBI because everybody has something in the closet. Everybody’s got something, but a lifetime appointment … people couldn’t deal with e-mails from Hillary Clinton.”