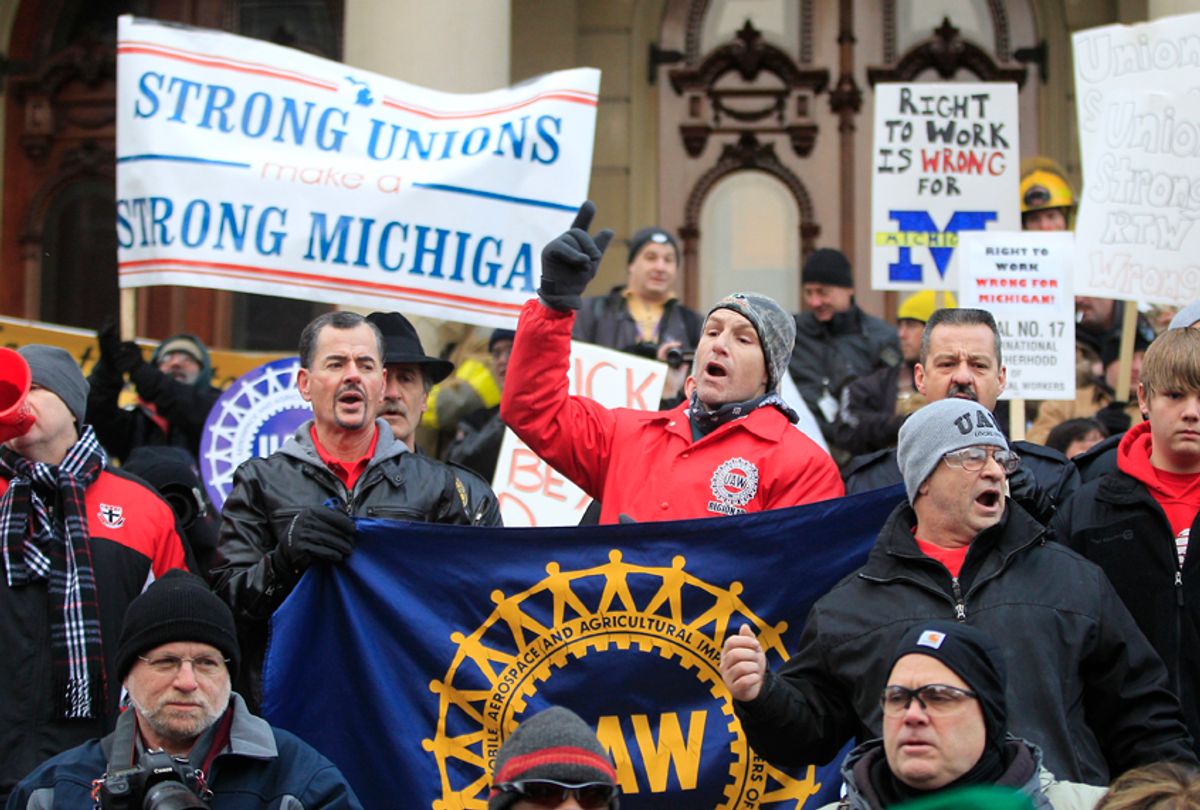 On September 5, the Michigan legislature seemed to take bold steps toward improving working conditions for its constituents: It passed legislation that would guarantee workers the right to earn paid sick leave, as well as a minimum wage increase to $12 an hour that mandates the same base wage for both tipped workers and non-tipped workers alike. These measures make the state the 11th in the nation to mandate paid sick days and the eighth to require that tipped workers be paid the same wage as all others.

But advocates are holding their applause. Both issues had been set to appear on the November ballot for voters to either approve or reject. By acting on them now, the legislature has ensured they will no longer appear on the ballot. Rather than requiring a three-quarter majority to change a voter-approved law, lawmakers will now only need a simple majority to change them later on.

And that seems to be exactly what they have planned. Even as they passed the measures, lawmakers made it clear that they did so not to enshrine them in law, but to create an opportunity to water them down later. “The Senate adopted the policy to preserve the ability for this legislature and future legislatures to amend the statute to better fit our state and our economy,” State Senate Republican Majority Leader Arlan B. Meekhof said in a statement after the vote. “The Senators heard from restaurant employees who fear they will earn less under the proposal and business owners who are concerned that they may have to reduce payroll in order to meet these new mandates. The Senate will be looking at options to improve the policies in the coming months.”

A number of Democrats, including all of those in the state Senate, voted against the measures. Democratic Rep. Leslie Love called the move "nothing less than voter suppression.”

The actions of the legislature didn’t shock Danielle Atkinson, founding director of Mothering Justice, who has been advocated for paid sick leave in the state for six years. “What happened [on September 5] was not a surprise,” she tells In These Times. The legislature has “pushed back on a number of occasions, starting with preemption and then just their hostility to moving legislation.”

Advocates are already vowing to fight back if the legislature does change the laws. “We believe the language of the [state] constitution is very clear that this is not an option available to the legislature,” Mark Brewer, an attorney who represents both the campaign to increase the minimum wage and the campaign to guarantee paid sick leave, tells In These Times. “We will sue to overturn any weakening of this law by the legislature.” He has been authorized by both groups to do research and gather evidence to be ready to file a lawsuit if and when the legislature acts.

The groups argue that the state constitution only affords lawmakers three options: adopt a ballot measure and make it law, reject it and send it in front of voters, or propose an alternative to appear alongside it on the ballot. A decision from the attorney general in 1964 stated that the legislature can’t amend such a measure the same year it enacted it “without violation of the spirit and letter” of the constitution. “We can declare victory now because there is no legal way to amend the legislation this year,” Michigan One Fair Wage said in a statement after the passage.

That organization, which had been advocating and collecting signatures for the minimum-wage ballot measure, has celebrated the passage while warning of retribution for future changes. “On behalf of the over one million workers and their families who will receive a raise, Michigan One Fair Wage is declaring victory in spurring the legislature to raise the minimum wage to $12 for all workers, including tipped workers who currently earn a subminimum wage of $3.52 an hour,” the group said in its statement. “This legislation would not have passed without the more than 400,000 Michigan voters who signed petitions demanding that One Fair Wage be on this November’s ballot.”

“It’s now the law of Michigan, which means that people are going to get a raise,” Brewer notes.

Atkinson sees it the same way. “We still consider it a victory because we know that the legislature [was] recognizing the importance of this issue, the popularity of this issue, the timeliness. They knew they couldn’t ignore it,” she says. “We are working to make sure that everybody knows that this is law.”

But the campaigns are also aware that this isn’t the end of the story. “The Republican legislature and their leadership and a lot of their members were very clear in saying that the only reason they were adopting this was to keep it off the ballot,” Brewer notes. And yet, he says, “No Michigan legislature has ever done that.”

A few of the top options lawmakers appear to be considering reinstating a lower minimum wage for tipped employees and slowing down the rate of the increase for everyone else, Brewer says. “We’ll just have to wait and see.”

Advocates are not just going to sit on their hands while they wait, however. The groups are “going to do a lot of public education,” Brewer says. “At this point, if the legislature votes to weaken the law they’re essentially taking away paid sick time or taking away a raise.”

“Our efforts right now are completely focused around to talking to every person we see,” Atkinson says. That includes knocking on doors, making phone calls and asking members to reach out to their friends and family. “It’s a right," says Atkinson, "and if the legislature comes back and amends it, they are taking away a freedom that you have fought so dearly for.” Her group also plans to travel to Lansing to speak directly with lawmakers. “Hopefully they’ll listen to us before they listen to the lobbyists,” she says.

Michigan One Fair Wage and groups that support paid sick leave have vowed to turn people out to the polls in November, both to counter any dampening in enthusiasm with these issues off the ballot and also to show lawmakers that their constituents want them to stick to their promises. Ellen Bravo and Wendy Chun-Hoon, co-executive directors of Family Values @ Work, an organization that supports local paid-sick-leave campaigns, said in a statement, "All the partner groups in this coalition will mobilize to ensure that every legislator who voted for the bill hears from their constituents. They will do everything in their power to preserve the law they won. And they will work to achieve the highest possible turnout at the polls.”

“From Texas to Michigan, Americans are sending a message that they’re ready to do what politicians have failed to do: ensure no one [has] to choose between caring for a sick child and paying rent,” Jonathan Schleifer, executive director of The Fairness Project, which supports efforts to require paid sick leave, says in an email to In These Times. “Elected leaders who fail to listen will be held accountable.”