The Kavanaugh confirmation fight: A major battle in the Republican War on Women

Whether or not Christine Blasey Ford faces the Senate, this confrontation could shape American politics for decades 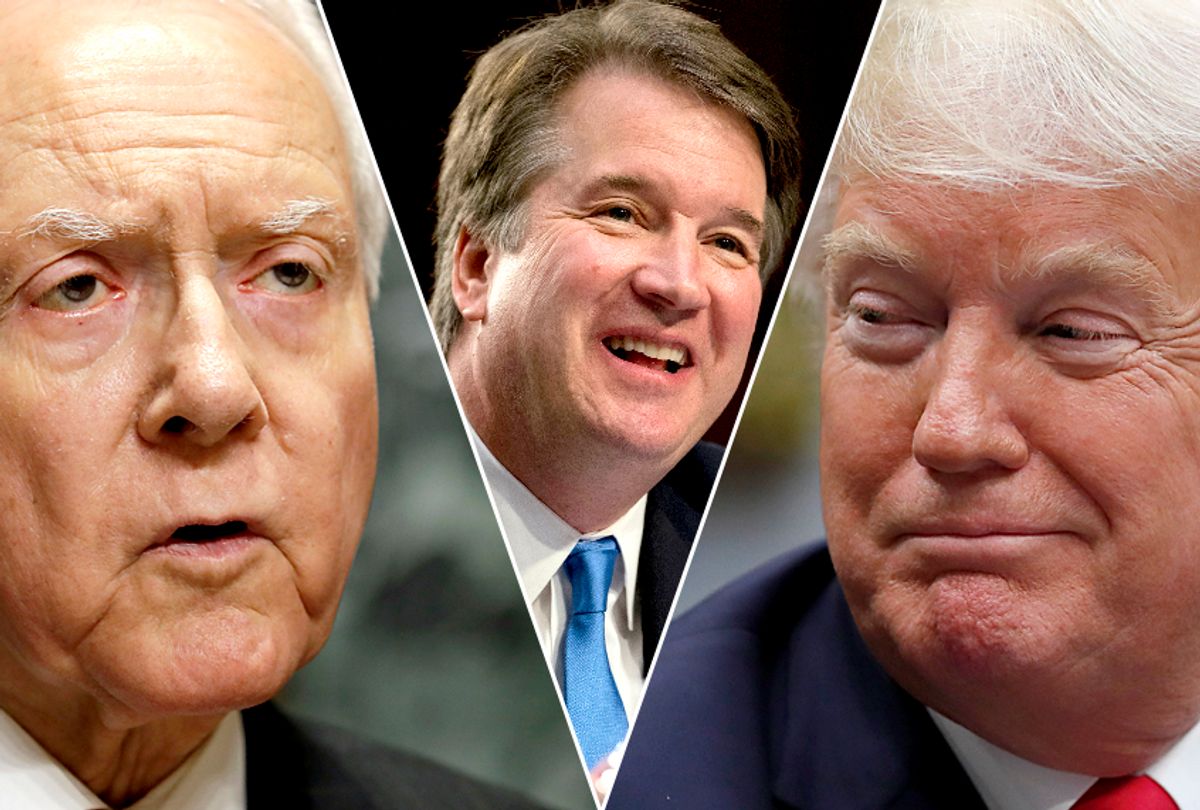 The contentious fight over Brett Kavanaugh’s Supreme Court nomination escalated in the past week as Christine Blasey Ford, a psychology professor at Palo Alto University in California, came forward to accuse Kavanaugh of attempting to sexually assault her at a high school party in suburban Maryland 36 years ago. The accusation was a bombshell that interrupted what many thought was an inevitable confirmation and inflamed an already divisive debate over gender inequality and patriarchal power. Now, with Ford weighing an invitation to testify before the Senate -- while requesting an FBI investigation into her allegations in advance -- Kavanaugh’s confirmation has become anyone’s guess. The only thing certain is that the political and social reverberations of this episode will be felt for years to come.

Republican reactions to Ford’s accusation has been predictably disgusting. Immediately pundits began questioning her integrity, calling her an opportunist or suggesting she should be punished for filing a false charge. In a repulsive act befitting his repulsive family, Donald Trump Jr. took to the internet to make fun of the victim’s trauma. Sen. Orrin Hatch, R-Utah, went so far as to say even if the accusations were true, he imagined that Kavanaugh would still be confirmed, as Hatch and his Senate colleagues would look at the man he’d become.

Immediately, Hatch and his fellow Senate Republicans began wrestling with the strategy of dealing with a last-second allegation that could potentially derail the entire well-orchestrated process of the Kavanaugh confirmation. They decided that the best course of action would be to invite Ford to testify, fully expecting she would decline because of the expected stress and discomfort, and then continue unabated. Ford has said she is willing to appear before the Judiciary Committee if a law enforcement investigation is carried out first, leaving the situation, at this moment, at an impasse.

All this sets the stage for a moment of reckoning that could blow the Kavanaugh nomination out of the water and potentially ruin any chance of the Republican Party receiving any significant support from American women for generations to come.

For decades now the Republican Party has waged what some have termed a “War on Women” that has sought to slow social progress and continue patriarchal control over the destinies and bodies of American women. This battle between progressive and conservative ideals has more or less defined the past few decades of politics, and has reached a boiling point of sorts with the current #MeToo Movement, a cultural revolution focused on exposing patriarchal misdeeds and hastening gender equality.

That movement is in direct opposition to the Republican "pro-life" reactionary agenda, a set of ideals that seems particularly vested in opposing any move to change the patriarchal or racial status quo. There have been continual clashes between Republicans and women over any number of pertinent issues, including abortion, birth control, equal pay and sexual harassment, but very rarely has the battle been so public and explosive as with the Senate Judiciary Committee's potential confrontation with Christine Blasey Ford.

The most readily apparent comparison, of course, has to be the 1991 confirmation hearings for Clarence Thomas, a controversial affair in which his former employee Anita Hill testified about allegations that Thomas had sexually harassed her. The testimony was a revolting circus in which Hill’s integrity was continually questioned – Hatch, who played an important role in that event as well, suggested Hill was working with special interests to undermining Thomas’s confirmation – and the machinery of the right worked overtime to slime Hill and corroborating witnesses.

No doubt this is what we should expect too, as Kavanaugh’s confirmation moves forward. The initial reaction was bad enough, but Republicans have been particularly bad at toeing their political line while showing restraint on women’s issues. In reference to birth control, figures like former Sen. Rick Santorum and Rush Limbaugh have regularly made reference to women “keeping aspirin between their knees” instead of taking birth control, a hideous line that has shown how little the party respects women or their lives. Then, of course, there have been a myriad of scandals that show the divide between Republicans and women, maybe none more so than the putrid affair of Roy Moore, the Alabama judge accused of multiple inappropriate relationships with underage girls, who was still protected by most political leaders and commentators on the right, even as the evidence against him mounted.

The War on Women has been raging for decades now, but it’s important to note why exactly we’ve reached such a moment of reckoning. The hearings we may (or may not) witness next week certainly echo what we’ve seen in the past, particularly the Anita Hill matter, but this round feels different. There’s a definite feeling that, if handled incorrectly, it could change the political landscape for the foreseeable future. And it’s especially easy to lay the blame for that -- on the president of the United States.

There’s a case to be made that the #MeToo movement was inevitable, an uprising of sorts that was generations in the making. But there’s also an argument to be had that we wouldn’t be in this moment of comeuppance and change if Donald J. Trump hadn’t been elected president.

In Trump we have the undeniable embodiment of American toxic masculinity. His entire character is based on never-ending self-promotion, a pronounced lack of care and empathy, a tendency toward aggression and a noted lack of respect for women. Even before he became a political candidate, Trump was famous for his mistreatment of women, whether they were his ex-wives, celebrities in the news or his longtime nemesis Rosie O’Donnell. After he entered the 2016 presidential race, Trump made one of his first splashes by insulting then-Fox News host Megyn Kelly with an apparent reference to menstrual fluids.

His candidacy was marked by this disrespect, including a moment that is often forgotten now in which he, a man who considered himself publicly pro-choice for many years, casually floated the idea of punishing women who had chosen to have an abortion. This, along with Trump's many other adversarial positions toward women, exemplified the War on Women in as stark as terms as we’d seen. Republicans had managed to fight gender progress for years, but had done so with a sleek veneer and plausible deniability, at least trying to come off as not openly confrontational, a trend that Trump bucked immediately.

No conversation of Trump’s affect on gender battles would be complete without mention of the now-infamous "Access Hollywood" tape in which he was recorded bragging about sexually assaulting women. This would have sounded the death knell for most political campaigns, but Trump’s candidacy broke the mold forever and set the stage for what might now be a climactic battle in the War on Women. The Republican Party stood behind him as Trump remained defiant, supporting a man who, in his own words, admitted to being a sexual predator. That support never flagged as women came forward to accuse Trump of the exact behavior he’d been taped bragging about. In my own reporting following those accusations, I found crowds of Trump supporters who either dismissed the accusers as “whores” or else thought they should “lighten up” or take pride in having garnered someone like Trump’s attention.

The result is an electorate that is as sharply divided by gender as any we’ve seen before. Heading into the 2018 midterm elections, polls show that 65 percent of women have a negative view of Trump and prefer Democrats to Republicans by 25 points. This is already a monumental split that could shape elections for years to come. Although it's hard to imagine those numbers growing much larger, with the possible showdown between Ford and Kavanaugh we could see a seismic event that could shake the very foundations of power.

Republicans face a historic crossroads with this situation. Already they have shown a preference for standing with Kavanaugh, and have stood behind Trump even as he flagrantly disrespected women. But the stage is now set for a moment of significant importance. The Anita Hill hearings have become legendary and will be entered into the history books as a turning point of sorts, but the Kavanaugh confirmation arrives at a time when the battle lines have been drawn and public scrutiny is higher than ever. With the emergence of social media and the #MeToo movement, it’s hard to imagine a brighter spotlight than the one of this moment.

If Republicans continue to press and undermine Ford, are seen as disrespecting her the same way they disrespected Anita Hill, and continue with their War on Women in its most blatant form, that could set in motion a chain of events that could determine this November's election and many elections to come. Women have already turned their backs on the Republican Party in droves, but there’s now a possibility they could render the GOP politically unviable. Republicans may yet get Brett Kavanaugh a seat on the Supreme Court. But if they aren’t careful, this could be an end from which there is no returning.

#MeToo founder: Every survivor of sexual violence is different

Activist Tarana Burke on her personal journey of survival and how she launched a transformational movement.