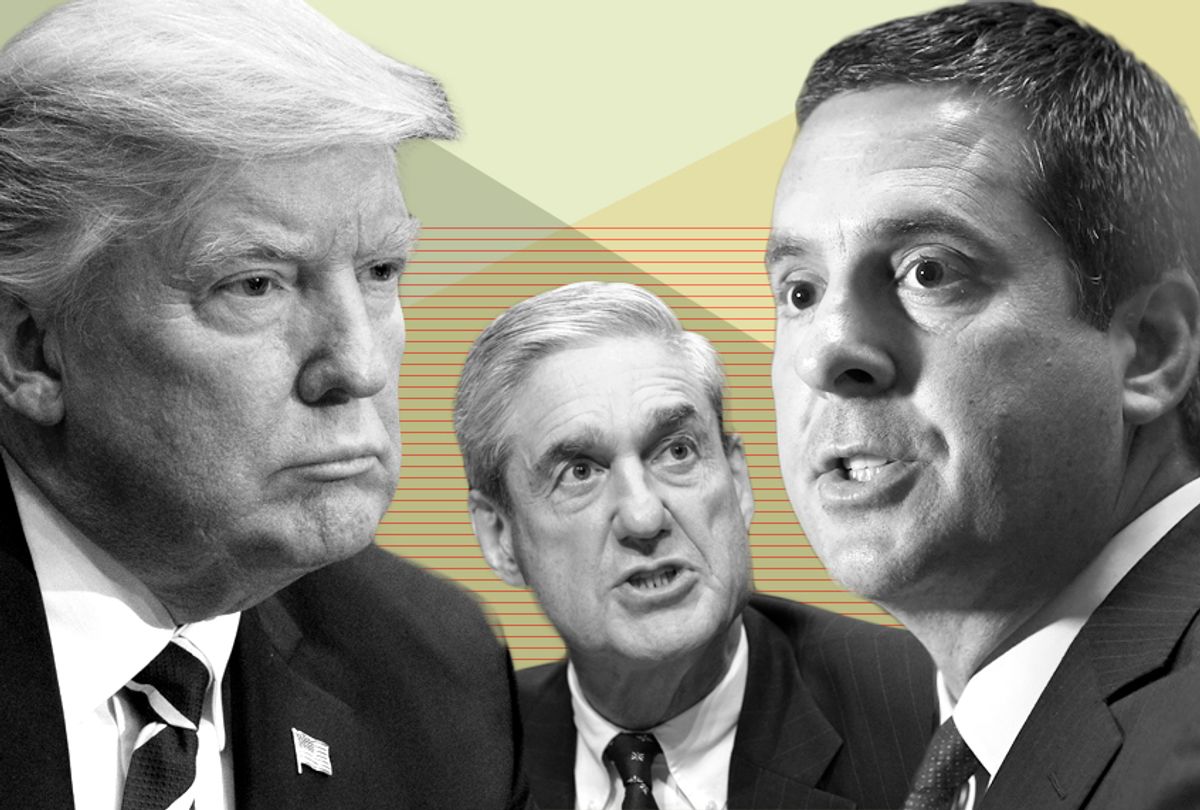 Way back at the beginning of the year, when the infamous "Nunes memo" was being flogged as the smoking gun that would blow the lid off of the Russia investigation by exposing the entire Department of Justice and FBI as the Hillary-loving traitors they are, President Trump played a rare clever hand. Instead of releasing the classified information himself, he played Pontius Pilate and pretended he had no choice in the matter, allowing the Republicans in Congress to do the dirty work. But that was before he decided that destroying the independent legal and intelligence institutions of the United States would become his proudest personal legacy.

Trump told The Hill TV on Tuesday that he sees his battle against what he calls the "corrupt" Department of Justice, FBI  and intelligence community's investigation into Russian interference in America's electoral system as his "crowning achievement."

He said, "What we’ve done is a great service to the country. Really, in its own way, this might be the most important thing because this was corrupt." He continued, "They know this is one of the great scandals in the history of our country because basically what they did is, they used Carter Page, who nobody even knew -- who I feel very badly for, I think he’s been treated very badly -- they used Carter Page as a foil in order to surveil a candidate for the presidency of the United States.”

The "great service" the president is talking about was his decision this week to order the Justice Department to release classified information used in the 2017 FISA warrant application for Page, along with text messages from former FBI director James Comey, former deputy director Andrew McCabe, and former FBI employees Lisa Page, Peter Strzok and Bruce Ohr. According to The Hill, Trump has no idea what's in the documents or the text messages, but Rep. Devin Nunes and the Keystone Kops of the House Intelligence Committee have obviously convinced him that this will be the revelation that turns the tables on Mueller and finally proves that the witch hunt really was rigged.

The new twist is that Trump is now comforting himself with a grandiose delusion that Americans will believe he's leading a righteous crusade to save the country, instead of cravenly abusing his power to save himself. That's unlikely. Polling shows that special counsel Robert Mueller has a much higher approval rating than Trump.

John Solomon of The Hill, who conducted the interview, went to some length on Sean Hannity's show Tuesday night to assure everyone that reports of the president being unbalanced and ill-informed were way off base. But according to the write up in his own publication, Trump said this:

That is a very strange thing for a well-balanced, well-informed, stable-genius president to say, since it makes no sense, not even as a joke.

Trump doesn't really seem to understand what this alleged "rigged witch hunt" is all about and you can't really blame him for that, since the surrounding GOP conspiracy theories are byzantine by design. Investigative journalist Marcy Wheeler dug into this latest demand a while back and concluded that this was nothing more than an attempt to feed the right-wing media an alternate narrative. In the end, it may be yet another dud like the previously released "Nunes memo" and the "Comey memos" and all the other big scoops that were teased as big reveals of dastardly Deep State deeds and came up short.

We also don't know if these documents reveal the kind of sensitive material that will put lives in danger, as the FBI has asserted. It's fair to note that national-security agencies tend to say that even when it isn't the case. It's certainly possible that these releases will further support the Department of Justice and the FISA court's decisions, as previously released documents have done. But even aside from the gross abuse of presidential power for personal gain (yet another in a long line of corrupt behavior), there's a bigger structural problem at work here that is extremely worrisome.

Greg Sargent at the Washington Post put it well in an article on Tuesday:

Regardless of the facts, these situations allow Trump and his allies to exploit deep structural imbalances in our discourse and political media. Even if the new release debunks Trumpworld’s narrative, they will lie relentlessly in bad faith to the contrary, and madly cherry-pick from the new information to make their case. And they can count on assistance from a massive right-wing media infrastructure that will faithfully blare forth this narrative — even as the major news organizations adopt a much more careful approach that treats the interpretation of the new information as a matter for legitimate dispute, thus putting good-faith analysis and bad-faith propaganda on equal footing.

And because the details are so deliberately convoluted, that "good-faith analysis" never really penetrates at all. It's just white noise roaring in the background.

This is all leading toward the day when Trump finally pulls the trigger and fires Attorney General Jeff Sessions and Deputy Attorney General Rod Rosenstein. He will then demand that whichever flunky becomes his acting attorney general disband the special counsel's office and end the investigation. We will all wring our hands and rend our garments when we see that the "cause" this new Trump appointee cites is some version of Nunes' absurd "Deep State" narrative. We will understand that it's nonsense. But what are we going to do about it -- take it to the Supreme Court?