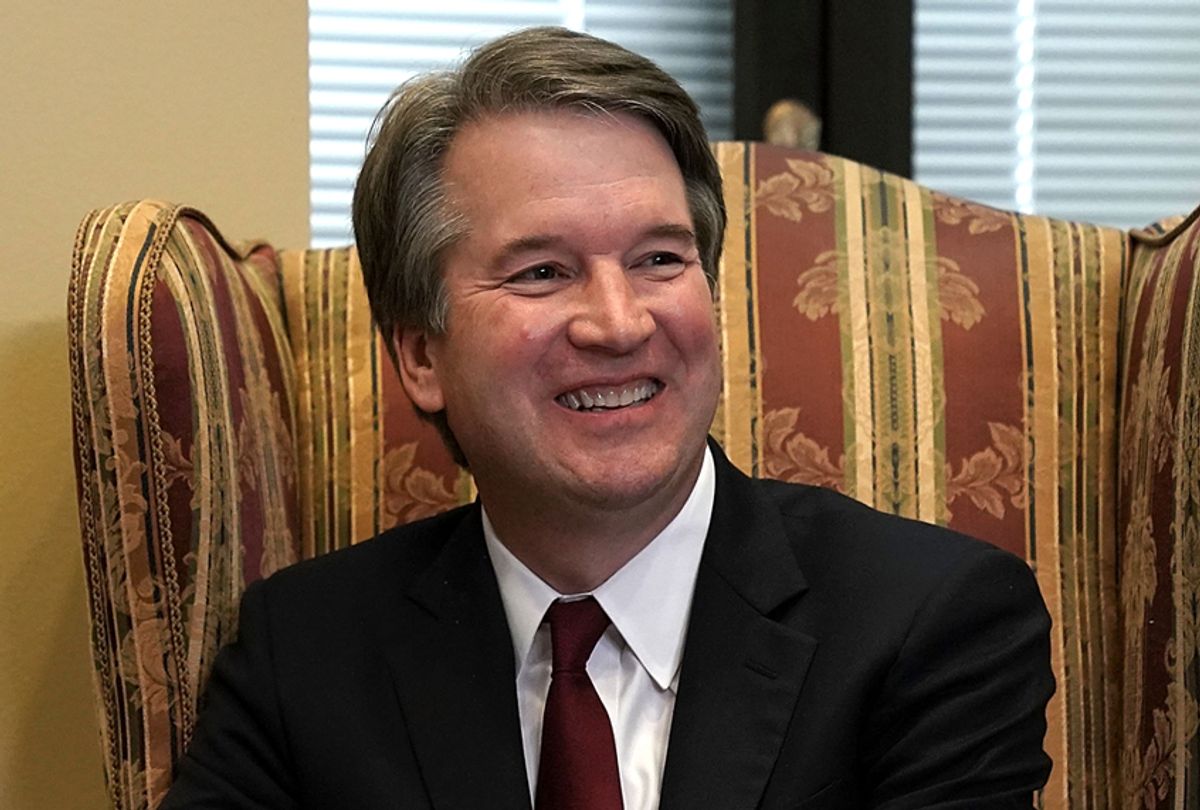 President Donald Trump's recent pick for the Supreme Court, Justice Brett Kavanaugh, is facing increased scrutiny over his days as a Yale University undergraduate and as an appellate court judge.

Kavanaugh, whose nomination has been roiled by an accusation of attempted rape by California research psychologist Christine Blasey Ford, was part of a Yale fraternity known as Delta Kappa Epsilon that engaged in a number of sexist rituals, according to Yale Daily News. The campus newspaper pointed to a photograph of DKE members waving a flag women from women's underwear as part of a procession. Although Kavanaugh is not in the photograph, he was a member of the fraternity at the time that it was taken.

As the Yale Daily News writes:

In a letter to the editor published in the News three days later, a Yale student, Rachel Eisler ’86, charged that DKE’s pledge antics “demean women.” She wrote that she approached one of the pledges carrying the flag to ask whether any briefs or jockstraps were affixed to the pole. “Well, I didn’t make it,” the pledge responded, according to the letter. He then said he doubted that any “guys’ stuff” would be woven into the flag.

“‘But hey,’” he told the female student, according to the letter. “‘Your panties might be here!”

Earlier this year, DKE became the subject of an investigation after reports that more than half a dozen members, including the frat's former president, had been accused of sexual assault.

Kavanaugh is also facing harsh criticism over reports that, as a judge, he would choose female law clerks based on their physical appearance, according to The Guardian.

A top professor at Yale Law School who strongly endorsed Supreme Court nominee Brett Kavanaugh as a “mentor to women” privately told a group of law students last year that it was “not an accident” that Kavanaugh’s female law clerks all “looked like models” and would provide advice to students about their physical appearance if they wanted to work for him, the Guardian has learned.

Amy Chua, a Yale professor who wrote a bestselling book on parenting called Battle Hymn of the Tiger Mother, was known for instructing female law students who were preparing for interviews with Kavanaugh on ways they could dress to exude a “model-like” femininity to help them win a post in Kavanaugh’s chambers, according to sources.

The Guardian also recalled a specific story in which Kavanaugh did this:

In one case, Jed Rubenfeld, also an influential professor at Yale and who is married to Chua, told a prospective clerk that Kavanaugh liked a certain “look”.

“He told me, ‘You should know that Judge Kavanaugh hires women with a certain look,’” one woman told the Guardian. “He did not say what the look was and I did not ask.”

Why Trump is quite Nixonian