DeRay Mckesson is just one man — why do other activists criticize him so harshly?

The days of leaders who have to represent us all are over. There's room for many individual voices, including his 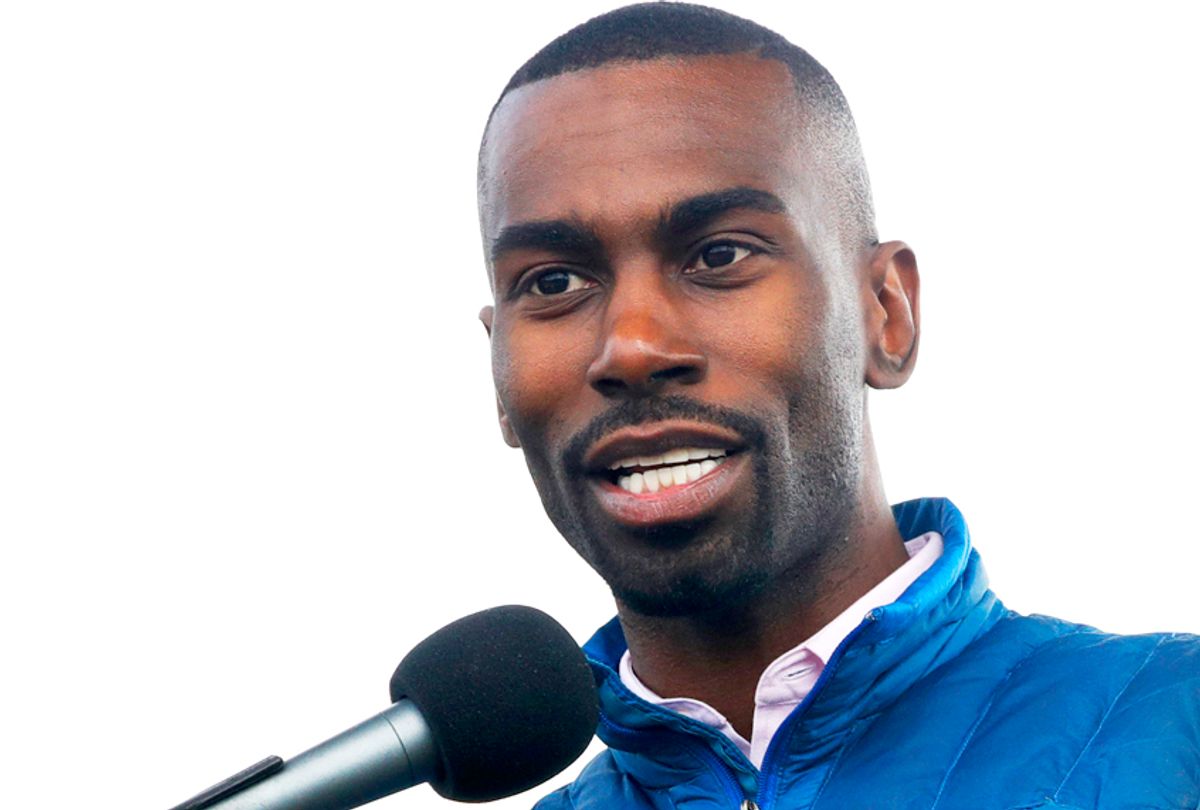 A Black boy with a drug addicted parent grows up, finishes college, meets Beyoncé and publishes a book. Sounds good, right? Wouldn’t you watch that movie? Many do support this narrative, but universal acceptance has not been a part of the DeRay Mckesson experience.

Love him or hate him, he's not slowing down. Mckesson just released his first book, "On The Other Side of Freedom: A Case For Hope."

"If I had written the book three years ago, it would have been about the pain of protest, and the play by play," Mckesson told me during a recent "Salon Talks" interview. "But I wanted to step back and think about: What were the themes, what were the lessons, what did I learn, what do I want to share about where we have been and where we can go?”

Watch the video below to hear DeRay Mckesson’s response to why he is a polarizing figure on Twitter.

Mckesson laid out his story eloquently in the book, receiving praise from the likes of Henry Louis Gates, who wrote, "By turns lyrical reflection and practical handbook, 'On the Other Side of Freedom' reveals the mind and motivations of a young man who has risen to the fore of millennial activism through study, discipline, and conviction. His belief in a world that can be made better, one act at a time, powers his narratives and opens up a view on the costs, consequences, and rewards of leading a movement."

And Dr. Ibram X. Kendi praised the hope, insight and empathy in Mckesson's writing. "[He] cools our fears of the struggle, ever guiding us on how to struggle. He stares down the faces of bigotry and unfreedom and cynicism and doesn’t flinch in writing out our marching orders toward freedom.”

But then Mckesson gave a book talk in St Louis last week. You'd think he would be welcomed by the community with open arms, since his brand is so closely tied to the Ferguson protests. But instead he was verbally assaulted by a local activist, leading me to wonder where the disconnect in how Mckesson is received comes from. And an even broader question about DeRay haters — is it even worth it?

Let me take it back to the beginning.

When Freddie Gray was killed by Baltimore police officers in 2015, local mentors, change makers and grassroots activists were given the opportunity to put the daily issues we face with poverty and poor policing on front street. For the first time in Baltimore history, everyday dudes were being given slots on MSNBC and CNN and other high-profile platforms to add personal narratives to the racist problems and policies we've lived under for decades.

“Hey D, stand right here,” a young blonde CNN producer said to me. “Your hit time is in ten minutes. We’ll get you mic’d up.”

It was early in the morning at downtown Baltimore's War Memorial Plaza across from City Hall. Media outlets lined the block from every angle.

A short stocky white dude with connected eyebrows approached me, mic in hand “We are going to put you down as D Mckesson, Ferguson activist, cool?”

“What?” I replied. “I’m from east Baltimore. I never ever been to St Louis.”

“Oh, I’m sorry,” he said, covering his face. “We booked DeRay Mckesson. You're the guy who wrote the Times piece. We aren’t expecting you until later on tonight. I’m so sorry, let me get you breakfast or lunch.”

My day was packed, my city was crazy, and I wanted to attend a community clean-up before my next appointment. As I walked back to the CNN-provided limo service, I saw a skinny dude with a blue vest and a pair of orange laceless Nike Frees walking up the street, his head glued to his phone. That’s the Ferguson dude from Twitter, I thought. They were looking for him.

After the clean-up, I was scheduled to appear on a radio show hosted by a popular Baltimore Sun reporter, Dan Rodricks. I walked into the studio and chopped it with Dan for a few before DeRay walked in. Dan introduced us, and we talked a little bit about how horrible the Baltimore City police are, and then started the show. That’s when I first heard that Mike Brown’s death drove him to Ferguson, and found out he was actually from west Baltimore. Our segment ended, we swapped numbers and went our separate ways.

I kept up with my community work and didn’t hear from or much about DeRay — not that I was supposed to — until I got a call from my friend Devin Allen, a Baltimore photographer who rose to prominence for the way he documented the local protests after Freddie Gray’s death.

“Yo D! You ain't gonna believe what happened!” Devin said. “Russell Simmons give me a check for $20,000! I wanted to start teaching kids photography and now have the money to grab all of the equipment!”

“Did he put the money on Rush card?” I laughed. “How Russell find you?”

“Man, that dude DeRay called me up talking all of this activism stuff, and by the end of the call he told me Russell wanted to connect,” Devin said. “I was like, you should’ve led with that!”

Devin got the money, bought the cameras, and has been teaching kids photography ever since. To date he has trained hundreds of kids and given away more than 200 professional cameras.

DeRay’s star continued to rise over the next few years. He’s toured the world, participated in and attended events with celebrities, was branded as a modern day Civil Rights leader and even ran for mayor in Baltimore, which is the first time I encountered DeRay hate. I understand the mudslinging that comes with politics; however, I heard activists call him a fake, saying things like, “DeRay is not from Baltimore, DeRay is not from the street!” The problem is that the dudes who were saying this also weren’t from the street, so their beef seemed weird to me. I tried to tell the Devin story as often as possible, because activists hating on each other solves nothing, and their problems with DeRay seemed silly — for thinking people, anyway. Ultimately, Mckesson finished sixth in his election bid, capturing only 3 percent of the vote, which probably made plenty of his haters happy.

DeRay's local and national popularity are like night and day. Baltimore is a very local town. People don’t leave or really have an interest in the platforms that have brought DeRay fame, like Black Twitter, the woke graphic t-shirt movement, Black Lives Matter, or basically anything outside of what’s happening in the streets of Baltimore. Don’t get me wrong, there are small communities in the city who subscribe to those worlds, but they are few and far between. There obviously aren't enough of them interested in electing a guy like Mckesson as mayor.

But here’s a thought: DeRay is DeRay. He didn’t create racism, white supremacy, police brutality or any of the systemic ills that oppress African Americans. If you think he had a hand in architecting these issues, or can fix them by himself — or through Twitter — then something is wrong with you. Sure, Mckesson is a cool guy, but he can not and will not save you. He's intelligent, understands branding, is great at answering tough questions and has the ability to contribute solutions to the conversation — just like you or anyone else who cares.

Would Dr. King have canceled the march on Washington because he didn't get a retweet from DeRay? Or Harriet Tubman decide to stop rescuing slaves because she found out that DeRay had more followers than her? Exactly. This country has produced the excellence that is Angela Davis, Huey Newton, Malcolm X, Ida B Wells, and we still need unity, we still need action, and we still have more work to do.

No single black person or organization can save you. I’ve been doing community work for years and have had plenty of successes and failures without DeRay. He did not ask to be the voice of African Americans, but social media and validation from millions of fans and media outlets often places him in that position. Which leads us to the real question: Do his haters hate DeRay or do they hate his success? Ask yourself: Would you attend celebrity events if you were invited? Would you go meet Beyoncé and Oprah if you had the chance? Would you tour the world or accept a million Twitter followers if you could? Of course you would.

Can DeRay be better? Can’t we all? I work at it everyday. It’s important to understand that he is a young man and is still growing, still getting used to the platform and power that he has, and even still, after he masters it, he’s still only going to be one guy. It’s hard for me to focus on DeRay’s accomplishments as an activist or master his day-to-day because I have my own life. I have my own mission and my own work. And if you are truly working and trying to make change with a pure heart, then the efforts of one man, and his successes, shouldn’t stop you.

Moving forward, we need to acknowledge that the days of Dr. Martin Luther King and Malcolm X are over. There are so many positive black people working for change, and there's no single black voice. We all have our own perspective and opinion. Furthermore, we need to partner with and build with each other, instead of being so quick to tear each other down. And if people don’t want to partner with you or support your cause, that’s fine; there’s still work that needs to be done. The best critique is creation, not aimlessly hating.