Bob-Waksberg isn't afraid to make fun of pretentious TV writers because "I am certainly one, in certain cases" 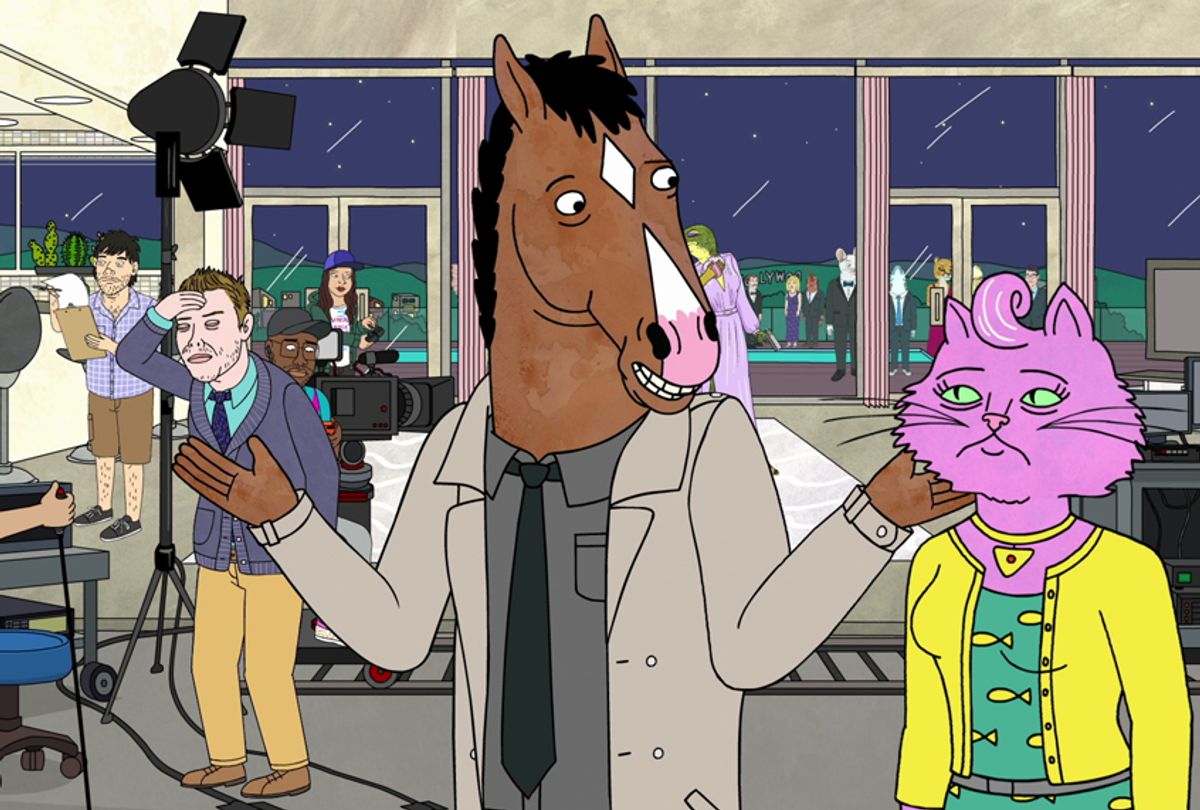 Per series creator Raphael Bob-Waksberg, BoJack Horseman’s Season 5 path was dictated in part by the fans — but not in the way you might think.

“I saw a lot of reaction from people when Season 3 ended saying, ‘I’m done with this character,'” Bob-Waksberg told IndieWire. “‘BoJack is un-redeemable, he’s unforgivable. He’s crossed the last threshold of my compassion. I’m going to keep watching the show because I love all the other characters and I love the world, but I can’t care about this character anymore.'”

Season 3 of Netflix’s Hollywoo(d) satire ends with one of the show’s darkest notes: the death by overdose of “Horsin’ Around” child star Sarah Lynn (voiced by Kristen Schaal), followed by addict/actor BoJack (voiced by Will Arnett) abandoning his life and friends in Los Angeles.

But, cut to one year later, and a new season sees BoJack confront at least a few of his darkest issues and, more importantly, make a connection with his newly-discovered half-sister, Hollyhock (voiced by Aparna Nancherla). “At the end of Season 4, a lot of people said, ‘Oh my God, I love him. I’m so happy he’s happy. He found the way to be. There’s someone in his life now. This is great. This is wonderful.'”

Read more IndieWire: ‘BoJack Horseman’ Creator on Will Arnett’s Emmy-Worthy Episode and the Joy of Getting to Experiment in Season 5

Bob-Waksberg’s response was to tackle it head-on in Season 5. “We really wanted to show, this season, BoJack in many ways at his most vulnerable but also at his most abhorrent. To kind of deal with the unease of that, I think that was a really fascinating thing to explore.”

Within that context came the decision to “not to dismiss him entirely but not forgive him entirely. To explore that dichotomy and what is it like to be a person in this guy’s life, where you care about him but you also are very much aware of some of his perhaps unforgivable actions,” he said. “And how do you square that away within yourself? And how do you deal with that when that is you, when you are BoJack and you feel vulnerable but you also know you’ve done terrible things that are inexcusable?”

The connection between BoJack’s personal journey and the show “Philbert,” a gritty new detective drama being produced for the streaming network WhatTimeIsItRightNow.Com, came about pretty naturally.

“When we started it, we’re like all right, we want to make this show feel like its directly connected to BoJack’s brain in a way, and that this character could be a really interesting commentary on the way that Bojack sees himself but also as the way we see BoJack — the way the audience sees Bojack,” Bob-Waksberg said.

Read more IndieWire: ‘BoJack Horseman’ Has Become So Great It’s Beyond Reproach — So Season 5 Critiques Itself

“The idea of him kind of losing himself in this character or the character kind of infiltrating his psyche felt like a really interesting thing to explore. I am interested in seeing that with actors, how much playing the character does affect them. It’s not a clean thing, where at the end of the day you can go, ‘OK, I did my job and I’m stepping away.’ I think actually some actors do. I think some actors are very smart and have the tools. They know how to disconnect themselves from the characters, but I think for a lot of them, it’s very difficult.”

Part of letting “Philbert” as a satire evolve included putting the spotlight on showrunner Flip McVicker (voiced by Rami Malek); who, as the prototypical tortured writer, was a character Bob-Waksberg and the writers didn’t hesitate to mock.

“I’m always happy to take down pretentious writers on my show because I feel like that’s only fair,” he said. “I feel like we do so much shitting on network executives and actors and all the other parts of Hollywood, it would hypocritical for me to be like, ‘But the writer is the sole brilliant artist and if only he or she were allowed to flourish unfiltered, then the world would be a better place.'”

It’s not the first time the writing process has been challenged by the show, as Bob-Waksberg noted — the Season 3 character Cuddlywhiskers was another key example. “I kind of want to take the writer down a peg. I think there are a lot of pretentious writers in this business, which I am certainly one, in certain cases. I think it’s important to note that we have our own damage to work through, and we are not necessarily these brilliant artists that are being compromised by the deals with have to make with this suits,” he said.

He also noted that in the world of television, an egotistical writer can be a destructive force on set. “The tyranny of the showrunner is a very real thing as well,” he said. “It’s something I’ve seen a lot of: these tortured geniuses, or self-proclaimed tortured geniuses, who kind of take their damage out on others. I think being a showrunner, you have a lot of unchecked power and I think that can be a very dangerous thing.”

“It’s a thing I take very seriously,” he said. “I would actually love if our industry could regulate that a little better — if the Writers Guild could regulate that a little better — because I do think there are a lot of people given these high-powered jobs who don’t deserve them and I think are not ready for them and they make a lot of people miserable. That was kind of the inspiration for that character. Someone who makes people miserable. Mostly through inexperience and delusions of grandeur.”

Bob-Waksberg declined to draw any direct comparisons between “Philbert” and real-life dark dramas currently streaming on any particular service, laughing as he said, “They’re all the same, right?”

“It’s up to the audience to decide which shows they think this is like,” he said. “I don’t think it’s like one specifically, but certainly there are lots of tropes and trends that we poke at. I would say any show with an unexamined male antihero is what we have in our crosshair. Any show that kind of relish the damage of its main character without really investigating what that damage does, where it’s from or what it means, is a show I think needs to be taken down a peg.”