McConnell: "In the very near future, Judge Kavanaugh will be on the United States Supreme Court"

"We’re going to plow right through it," he told conservatives at the Family Research Council Values Voter Summit 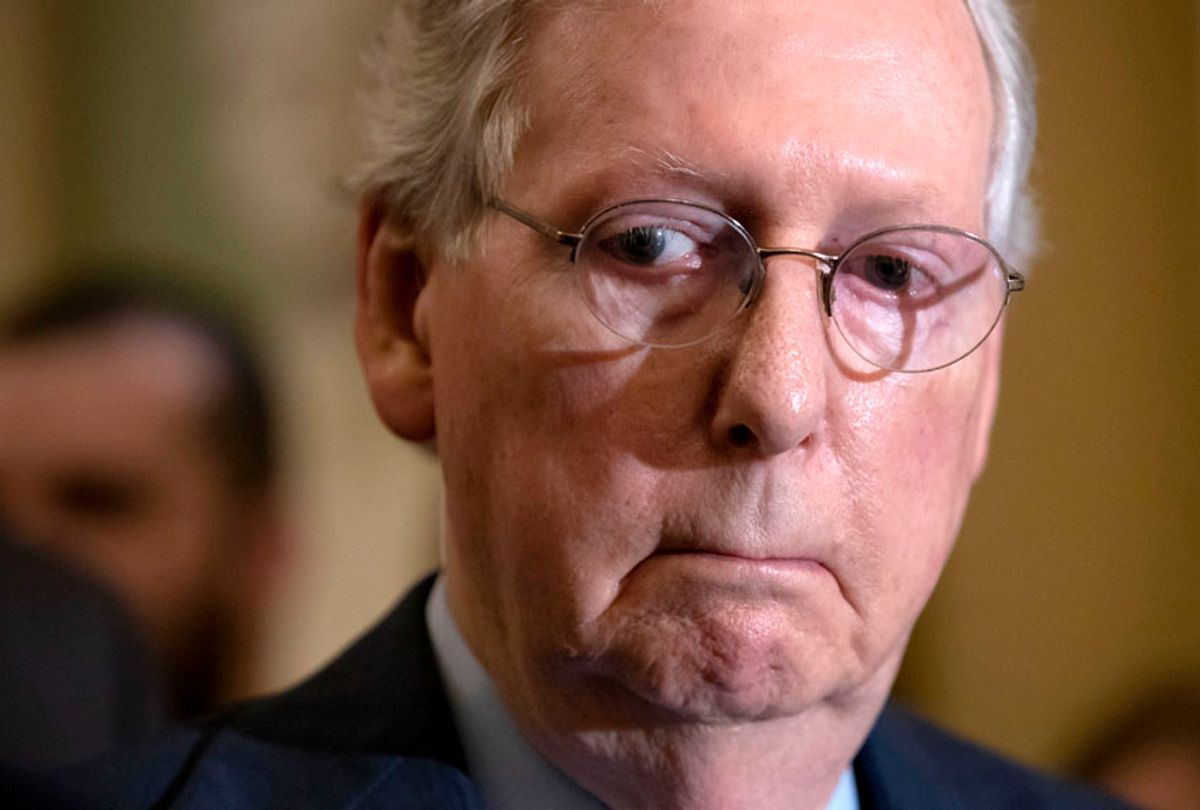 "You’re all following the current Supreme Court fight, and you will watch it unfold in the course of the next week," McConnell said to conservatives gathered at the Family Research Council Values Voter Summit. "President Trump has nominated a stunningly-successful individual. You’ve watched the fight. You’ve watched the tactics. But here’s what I want to tell you: In the very near future, Judge Kavanaugh will be on the United States Supreme Court."

McConnell's statement was met with resounding applause and cheers from the crowd. Once cameras panned out to the audience, they showed everyone on their feet giving the Republican lawmaker a standing ovation.

"So my friends, keep the faith," McConnell added. "Don’t get rattled by all of this: We’re going to plow right through it and do our job."

It was a remarkable display of confidence given the fact that neither McConnell or anyone else in the crowd has yet heard testimony from Kavanaugh's accuser, Christine Blasey Ford, who claims that the Supreme Court nominee pinned her down on a bed, groped her, tried to remove her clothes and covered her mouth when she attempted to scream at a high school party in the 1980s.

While top Republicans have expressed an interest in hearing Ford's testimony, McConnell's remarks undermine the sincerity of that invitation. His confidence was also shared by White House counselor Kellyanne Conway, who during a heated exchange on CNN's "Cuomo Primetime," threatened to walk out of the interview. "I can leave," she asserted. "And we can watch him get confirmed next week. Are you ready for that?"

Republicans on the Senate Judiciary Committee are currently in negotiations with Ford's attorneys over the conditions under which she would be willing to testify. On Thursday, they told committee staff that the only "deal breaker" would be an appearance by Ford on Monday. Her lawyers also requested security measures, that Kavanaugh not be present while she testifies, that she testify after the judge and that the committee not enlist outside counsel to lead the questioning.

A counter offer was sent Friday, according to USA Today, and committee Republicans agreed to delay the hearing until Wednesday and to Ford's requests for security and separation from Kavanaugh. But Ford will not be able to testify after Kavanaugh, because he needs to be able to respond to her claims. The question of outside counsel is still open.

But comments from the GOP leaders – McConnell and Trump – raise serious questions about the Republican Party's sincerity in probing Ford's allegations. In one particularly disparaging tweet about Ford, Trump proclaimed that, if she actually experienced an assault "as bad as she says, charges would have been immediately filed."

Sen. Susan Collins (R-Maine), a critical vote in the confirmation of Kavanaugh, said Friday that she was "appalled" by Trump's tweet. "First of all, we know that allegations of sexual assault — I’m not saying that’s what happened in this case — but we know allegations of sexual assault are one of the most unreported crimes that exist," she said at a speaking event in Portland. "So I thought that the president’s tweet was completely inappropriate and wrong."