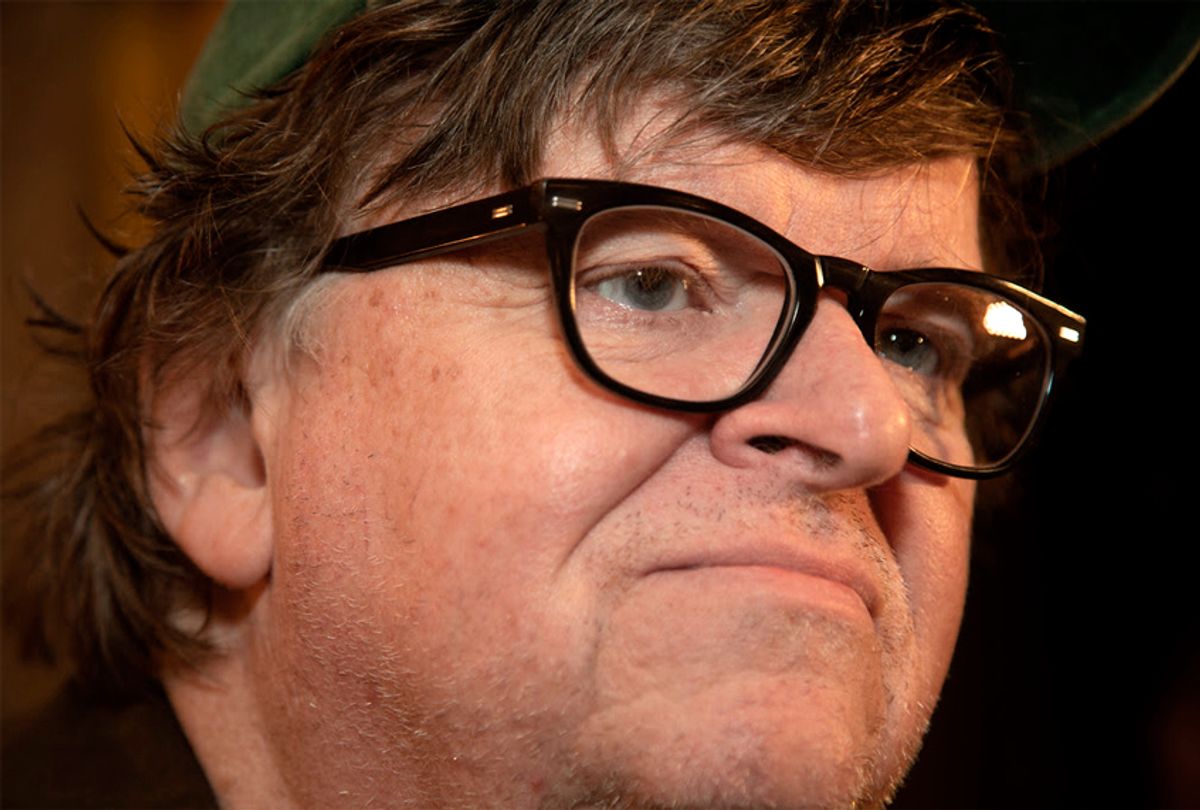 As with all Moore films, “Fahrenheit 11/9” goes well beyond a moving, aesthetic experience. In my Salon review of the film I called it a call to action, one that asks viewers to be the ones to make history rather than complain about it.  This call to action, though, comes wrapped in a hard-hitting exposé of the flaws in our democracy. Refusing to simplify a complex crisis, Moore’s new film is filled with surprises.  Here are the top six:

1. Trump is just the tip of the iceberg; but it’s a tip that can sink us.

Well before the premiere of “Fahrenheit 11/9” Moore was making it clear that viewers hoping to see the release of the “pee tape” would be disappointed. Moore convincingly argues that it was our own broken system that allowed for the election of Trump, which means that getting rid of him simply won’t be good enough. At the same time, though, “Fahrenheit 11/9” emphasizes the real dangers Trump poses to our nation, offering elaborate links between the Trump administration and that of the Nazis.

The film offers a delicate and artful balance: It calls on us to stop fantasizing that all of our problems will be solved with impeachment; and it demands that we take Trump’s authoritarian impulses seriously. In a media landscape that either obsesses over Trump or underestimates him, this film offers necessary nuance. It shows how dangerous Trump is to our democracy without allowing him to be the whole story.

2. The mainstream media is a misogynistic, corporatist oligarchy that Trump played to his benefit.

The film looks back on a series of interviews between 2016 presidential candidate Hillary Clinton and a number of news media personalities who have since lost their jobs in the #MeToo movement. Watching the sorts of questions guys like Charlie Rose and Matt Lauer put to Clinton in hindsight is chilling.  What might have originally seemed like tough reporting now seems like not-so-subtle misogyny.

Equally unsettling are the series of media appearances with Trump and his daughter, Ivanka. Photo after photo and clip after clip reveals Trump’s disturbing and public attraction to his daughter. But what stings the most are the media clips where on-air personalities witness Trump hitting on his daughter and do nothing about it. Moore suggests that the media allowed Trump to not just manhandle his daughter, but also to harass multiple women, on their watch. How was it, Moore asks, that Trump could fondle his daughter on air, but Clinton had to be grilled about emails?  What sort of media culture allows for that discrepancy?

Moore also shows how Trump played the media. Perhaps one of the most unexpected moments in the film takes place when Moore screens a series of clips where TV news aired empty podiums at Trump rallies. Trump had a habit of announcing a rally and then starting it late. Since TV news wanted to air the rally, they would hold on empty podiums — sometimes for well over a half hour — all the while offering the Trump campaign free advertising and suggesting to the public that even an empty Trump podium was newsworthy.

The film further underscores the oligarchic nature of mainstream outlets like The New York Times. He goes after CNN and CBS too. At a basic level this film is as much about how the media has failed us as it is about the dangers of Trump.

3. The crimes in Flint are worse than we thought.

One of the most brilliant features of the film is the way that Moore draws parallels between the local realities in Flint, Michigan, and the nation as a whole. Moore’s hometown of Flint has long been a featured part of his work; besides his personal nostalgia for the town, Flint offers a stark view of the ravages of a system that protects capitalism more than its own citizens.

This time the crisis in Flint centers on Michigan Governor Rick Snyder’s decision to replace Flint’s Lake Huron water source with the Flint River — a decision that meant that the town of Flint would end up poisoned by the water supply.

Moore shows how the Snyder administration covered up dangerous lead levels. One of the most unsettling reveals in the film comes from whistleblower April Cook-Hawkins, a former Genesee County Health Department secretary, who claims that her former boss instructed her to falsify blood lead test results and tell Flint families that their children had safe lead levels when they did not. These false results meant that the children of Flint did not receive healthcare that could mitigate their lead exposure.

Breaking the story of Cook-Hawkins, “Fahrenheit 11/9” suggests that the layers of corruption and greed and the complete disregard for the welfare of Flint residents went well beyond the governor’s office.

What will likely shock most viewers is the suggestion that President Barack Obama was also complicit with the Snyder camp. When Obama came to Flint to address the water crisis, the town celebrated, hoping he would bring in much-needed federal assistance. Instead, Obama dismissed the town’s anxieties, even going so far as to drink glasses of “Flint” water in what seemed like an obvious publicity stunt. In one scene, he even pretends to drink Flint water while seated at the same table as Snyder. Moore suggests that it may well have been Obama’s disregard for the people of Flint that kept Michigan voters home in 2016.

As if all of this weren’t enough, Moore then documents how the U.S. Army did training exercises in Flint, but failed to announce them to the residents. These scenes of urban combat training in a town that has already suffered severe trauma have to be seen to be believed.

4. The Democrats share a lot of blame for the rise of Trump.

Moore doesn’t just show Obama’s disturbing behavior in Flint; he also reminds viewers of how cozy he was with Wall Street. In a series of scenes that will likely disturb many viewers, he dives deep into the ways that establishment Democrats have sold out the party’s ideals and their voters. From Bill Clinton's pro-corporate policies to his ramping up of prison populations, Moore shows how party leaders since the Bill Clinton era have alienated voters and moved the party to the right.

Moore brings up the issue of super delegates and their role in the 2016 presidential race, but he does so as only part of a larger exposé of the ways that party leaders have suppressed progressive candidates. Rather than focus only on Bernie Sanders, Moore makes it clear that what happened to Sanders has happened down ticket as well. To drive home the point, “Fahrenheit 11/9” includes a taped conversation where Steny Hoyer (D-MD), who’s been in office since 1981, telling progressive Colorado candidate Levi Tillemann to drop out of the race and cede the spot to the more centrist candidate. When Tilleman questions Hoyer’s interference, Hoyer responds smugly that he has repeatedly chosen who gets to run for the party.

Taken together these scenes help paint a clear picture for why #DemExit grew in steam over the 2016 election, potentially paving the way for the Trump win.

5. The left is the majority — but doesn't act like it.

Moore runs down the numbers on major issues and underscores the fact that the majority of the country adheres to a left platform. How is it, he asks, that the left is the majority but doesn’t hold power? And why does the majority feel so marginalized politically? To get to the heart of that question “Fahrenheit 11/9” explains how a culture of compromise, conciliation, and passivity has allowed the left to lose.

“Fahrenheit 11/9” then turns to those who are leading the progressive movement.  Moore shows how a number of these left leaders were literally forced into action. From Parkland, FL, to the teachers who led the West Virginia strike to the rise of progressive candidates, Moore draws attention to a movement ready and willing to fight for a political platform truly in the people’s interest. They won’t succeed, though, the film argues, until the left acts like the national majority it really is.

6. Michael Moore is the most important non-fiction filmmaker of our time.

It is not an exaggeration to say that the only reason why the public can see non-fiction films in theaters is thanks to Moore's work. This film’s open in a record-setting number of theaters has Moore making film history yet again. From awards to box office successes to films that shape public discourse, Michael Moore has literally transformed non-fiction filmmaking not just in this nation but internationally as well. “Roger and Me,” “Bowling for Columbine,” “Fahrenheit 9/11,” and “Sicko” proved that it was possible to make films about difficult topics that were visually exciting, intellectually stimulating, and politically powerful.

Moore’s work as a filmmaker is part of a larger activist project, a fact that can make it possible to overlook his innovative cinematic style. His filmmaking has a unique aesthetic that blends satirical comedy and witty, incisive voiceover with investigative reporting and highly powerful cross-cutting techniques.

“Fahrenheit 11/9” solidifies Moore’s role in redefining what a non-fiction film can look like. His mastery of his craft is apparent throughout the movie, but there are two particular moments that really drive home the point. The first is the counterpoint between the prologue to the film, which shows the shock of Election Night 2016, and the opening sequence, which brilliantly reveals both the materiality and the artifice of the Trump presidency.

The second is the scene where Moore screens a 1950s/'60s-era educational short on the difference between a democracy and an authoritarian regime. Moore tells viewers that he used to hate watching those dry films when he was in school, but he now appreciates their valuable information. What he doesn’t say, and what he lets the viewer consider, is the fact that Moore himself has found a way to make films that are both educating and entertaining. Rather than lure us to sleep over classroom desks, Moore’s movies ask his viewers to hit the streets and work for change.

From the use of music to the last shots that are designed to push the audience out of complacency this is Moore’s most aesthetically moving film yet and it solidifies his role as the most important non-fiction filmmaker of our time.