Some of it's laughable, some of it's pathetic. Ted Cruz's 2018 re-election campaign hasn't gone all that well 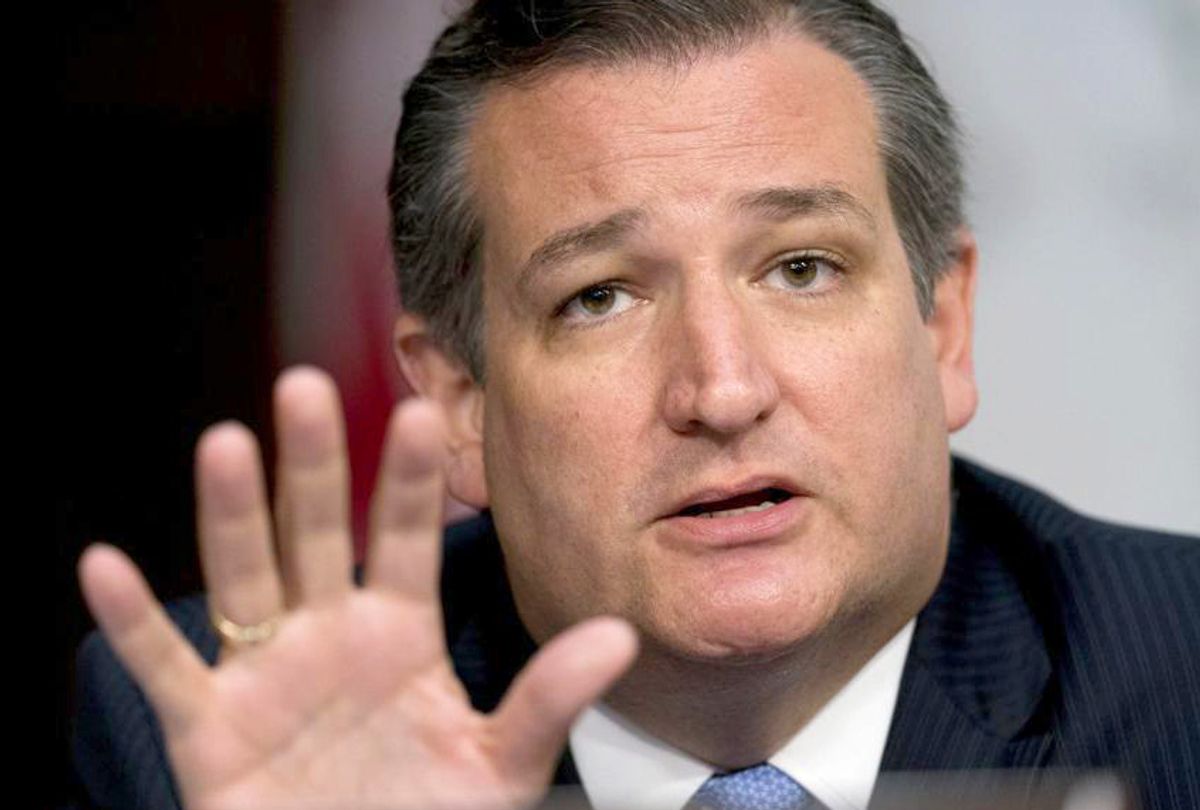 Offering some midterm analysis during a Sept. 17 appearance on Charles Ellison’s radio program, “Reality Check,” on WURD (a liberal-progressive African-American talk station in Philadelphia), Dr. G.S. Potter of the Strategic Institute of Intersectional Policy) declared that if Rep. Beto O’Rourke manages to defeat Sen. Ted Cruz in the Texas Senate race, he will likely be running for president of the United States eventually.

Potter asserted that anyone who is capable of defeating an incumbent GOP senator in a state as Republican-dominated as Texas is obviously a very charismatic and aggressive campaigner — and Cruz is worried by recent polls that show him only slightly ahead of O’Rourke. In response, Cruz has been resorting to some incredibly silly attacks — for example, claiming that O’Rourke wants to ban barbecue in Texas, or attacking him for having once played in a punk band. The more threatened Cruz feels by O’Rourke, the sillier his attacks have become.

Here are five of the silliest moments in Cruz’s campaign for reelection.

1. Cruz claims that O’Rourke will outlaw barbecue in Texas

Beto O’Rourke is hardly a vegetarian, let alone a vegan. He has publicly consumed cheeseburgers more than once during his senatorial campaign, and the El Paso native (who speaks Spanish fluently) is known for loving Mexican food — including tacos of the carnivorous variety. But that hasn’t stopped Cruz from trying to link O’Rourke with veganism. After members of People for the Ethical Treatment of Animals (PETA) demonstrated outside a Cruz event on Sept. 15, Cruz claimed that they were representative of O’Rourke’s campaign and declared, “If Texas elects a Democrat, they’re going to ban barbecue across the state of Texas.” And on Twitter, Cruz posted, “If Beto wins, BBQ will be illegal.”

2. Cruz attacked O’Rourke for having once played in a punk band

Back in the 1990s, O’Rourke played bass in a Texas-based punk band called Foss — and Cruz recently attacked him for that, claiming that it makes him unqualified to run for the U.S. Senate. It was one of the dumbest moments in Cruz’ scampaign, as Democrat Alexandria Ocasio-Cortez (who will be going to the U.S. House of Representatives in 2019 if she defeats Republican Anthony Pappas in Queens and the Bronx on Nov. 6) pointed out. In an Aug. 30 post on Twitter, Ocasio-Cortez  asserted, “Why is the GOP so corny? You can front a band and run for office. You can pierce your nose, be a bartender, a teacher, a stay-at-home parent; wear a dress or rip your jeans. None of this disqualifies you from advancing the fight for healthcare, education, housing and justice.”

Back in March — after O’Rourke won the Democratic senatorial nomination in Texas — Cruz responded with an attack ad that parodied Alabama’s 1984 country-rock hit “If You’re Gonna Play in Texas, You Gotta Have a Fiddle in the Band.” Cruz kept the melody, substituting Alabama’s original lyrics with claims that O’Rourke favored open borders and outlawing all guns. Even by Cruz standards, it was a pathetic ad — so pathetic that everyone from Stephen Colbert to The Young Turks’ Cenk Uygur mocked him unmercifully for it.

Cruz has attacked O’Rourke for using a Latino nickname (Beto is short for “Roberto” en español), implying that it shows that Robert “Beto” O’Rourke isn’t a real American. But resorting to that type of xenophobic nonsense is ironic in light of the fact that Cruz is a light-skinned Latino of Cuban descent. The Texas senator was born Raphael Cruz Jr. in Calgary, Canada on Dec. 22, 1970 — and his father, Raphael Cruz Sr., was an immigrant from Cuba.

5. Cruz is begging for President Trump’s help in Texas

Cruz doesn’t like what he’s been seeing in recent polls, which show O’Rourke trailing him by only 1 percent (Emerson College), 4 percent (NBC News/Marist) or 2 percent (Texas Lyceum). He has responded by begging President Trump to campaign for him in Texas, which is absolutely pathetic in light of how nasty things became when Cruz and Trump were competing in the 2016 GOP presidential primaries. Trump repeatedly called Cruz “Lyin’ Ted,” sometimes insulting Cruz’ wife in the process — and Trump, pandering to the Christian right, even told a crowd in Iowa that evangelicals couldn’t trust Cruz because of his Cuban heritage. But Cruz is willing to forgive all that nastiness if Trump will visit Texas and help save him from the possibility of an O’Rourke victory.

Here's why Scott Walker is worried