Tech billionaires keep buying publications. Here's what that means for the future of journalism 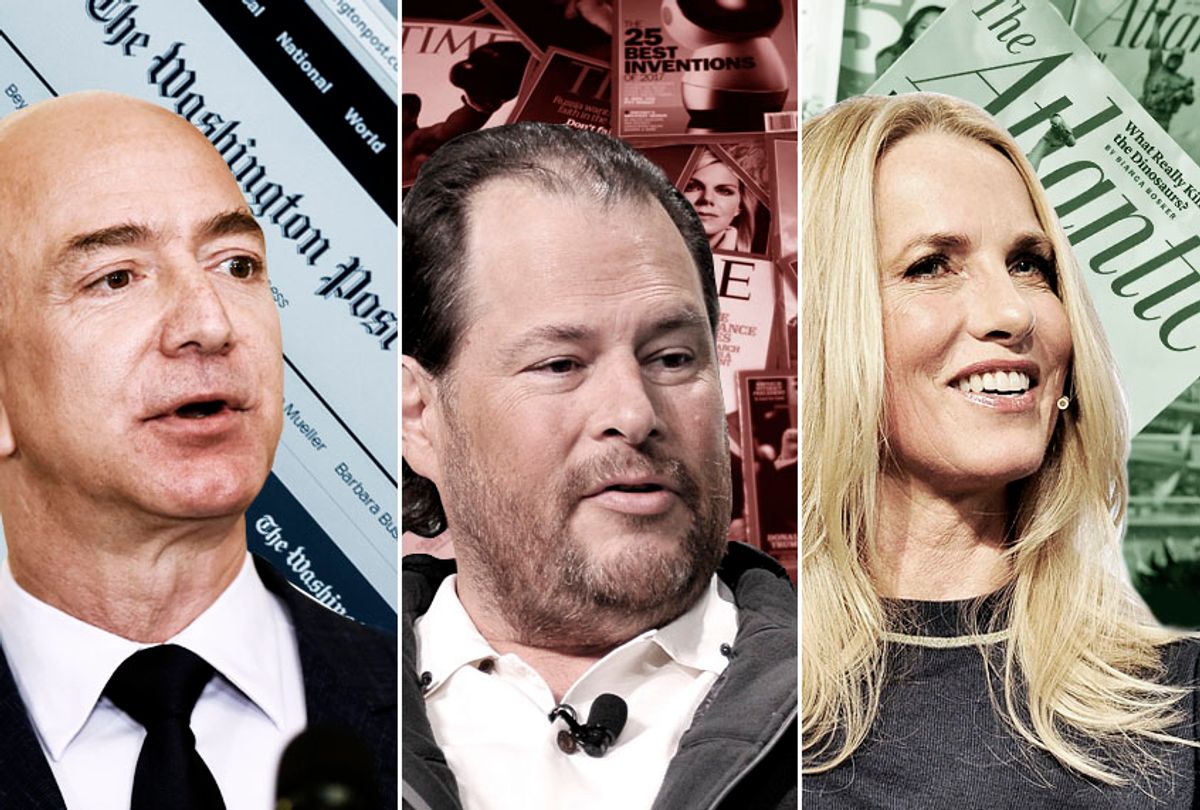 It's hard to imagine a greater irony than Silicon Valley, the cause of so many of journalism's woes, buying up the publications that it crippled. This week it's Marc Benioff, founder of Salesforce, and his wife, Lynne Benioff, who purchased Time magazine for $190 million in cash —  less than 3% of his reported $6.6 billion fortune.

In an interview with the New York Times conducted via text — because he was tied up getting a massage — Benioff said his interest in media is aligned with his “impact” portfolio, as in philanthropic investments. (He has a portfolio of almost 200 companies as part of his impact investing.) He noted that previous Time owners Meredith Corporation, the largest magazine company in the world, were a key part of this business decision.

“If Meredith didn’t buy Time Inc. this never would have happened,” Benioff texted.

In a statement, the Benioffs noted they won’t be involved in "the day-to-day operations or journalistic decisions.” However, in a video conversation with tech industry journalist Kara Swisher, Benioff spoke of his media buy in the kind of buzzword-heavy argot typical of tech industry insiders.

“This is a start-up,” Benioff told Swisher. “They [Time] have been opportunity constrained (...) but we are here to unshackle them.”

Specifics aside, for a Silicon Valley entrepreneur to describe the act of buying a prominent publication as “unshackling” is enough to make most journalists cringe, especially since — as Swisher pointed out in her New York Times op-ed — it is the tech industry that gutted journalism in the first place. Since the internet forced most publications to adopt a free online presence funded by click-driven ad revenue, the value of print advertisements — once the main source of print publication revenues — dwindled. Benioff’s comments also speak to his adherence to a neoliberal, tech-is-the-solution-to-everything worldview that seems increasingly suspect.

Alas, Benioff joins the ranks of tech billionaires (and their heirs) who have purchased media publications. In July 2017, Laurene Powell Jobs, daughter of the late Apple co-founder, bought a major stake in The Atlantic magazine. Biotech billionaire Patrick Soon-Shiong bought the Los Angeles Times, the San Diego Union-Tribune and other community newspapers for $500 million this summer, too. In 2013, Amazon CEO Jeff Bezos purchased the Washington Post for $250 million through his company Nash Holdings LLC.

“There is kind of a vague intersection there, a group of people who have a lot of money and are looking for worthwhile things to do with it,” Rick Edmonds, a media and business analyst at The Poynter Institute, told Salon. “I think that investing in journalism helps people understand and be better citizens in a democracy, [and that] is very much worthwhile.”

Historically, the wealthy have often been interested in owning media outlets; often, such ownership is a badge to represent one’s wealth.

"One thing that doesn’t get said much is that tech people are the ones buying these publications that is where the new rich people are being made, in tech,” David Greenberg, a professor of history and journalism at Rutgers University said of the trend of Silicon Valley entrepreneurs owning media. "There were newspaper barons in the old days, but their money came from other sources, but private owners owning newspapers is not a new thing.”

Indeed it is not. William Randolph Hearst got his start as a media mogul because his father inherited the San Francisco Examiner as repayment for a gambling debt. His father George Hearst was a millionaire by way of mining.

In 1929, wealthy investor Eugene Meyer purchased The Washington Post for $825,000 in a bankruptcy auction. Meyer’s daughter was Katharine Meyer Graham. Meyer purchased the paper from Ned McLean, a wealthy socialite who reportedly severely mismanaged the paper.

More recently, Bloomberg News was founded by businessman Michael Bloomberg, who was a millionaire by the time he started the company. Rupert Murdoch acquired the Wall Street Journal when he purchased Dow Jones for $5 billion in 2007. Investor Warren Buffett bought Omaha's World-Herald in 2011.

Greenberg said it is this history that could make way for Silicon Valley entrepreneurs to put their money in the game.

“In some ways having a single rich owner could be seen as a return to an old tradition that in many cases has served those newspapers well,” Greenberg said.

This does not mean it will bode well for the publication, though. In the era of Silicon Valley entrepreneurs buying publications, results have varied, Greenberg said.

“Bezos seems to be doing a good job with the Washington Post which has recovered from a down period,” he said. “On the other hand Chris Hughes was an absolute disaster."

Greenberg was a contributing editor at the New Republic when Facebook millionaire Chris Hughes infamously purchased The New Republic in 2012. Hughes ultimately ran the magazine into the ground, a debacle that ended with the resignation of nearly the entire masthead and Hughes bitterly selling off the magazine to other owners.

Rodney Benson, chair of the department and professor of Media, Culture, and Communication at New York University, said if this trend continues, it could raise questions around checks and balances in the media space.

“I think there is always a hope that when a media company goes from a stock-market traded company, where they are bleeding for profits, there is a sense of relief when a rich individual billionaire buys it, and there is a hope that he or she will provide a lot more resources than they’ve had in the past. But you have to wonder, at what cost?” he said.

“If you look at, say, inequality, there is a massive gap between the wealthy and the rest of us. That is a problem, so it is hard to imagine media owned by Silicon Valley billionaires will be the first to address these issues in a systematic way,” he said. “Is that a bias? I just think it’s unlikely.”

Benson said as it stands in the U.S., there is still a relatively pluralistic media system, but if “every major media organization across the country is owned by this and that billionaire, then yes, that would be a concern.”