The best-selling author on his new novel "Lake Success," and why we should be more wary of Ivy leaguers 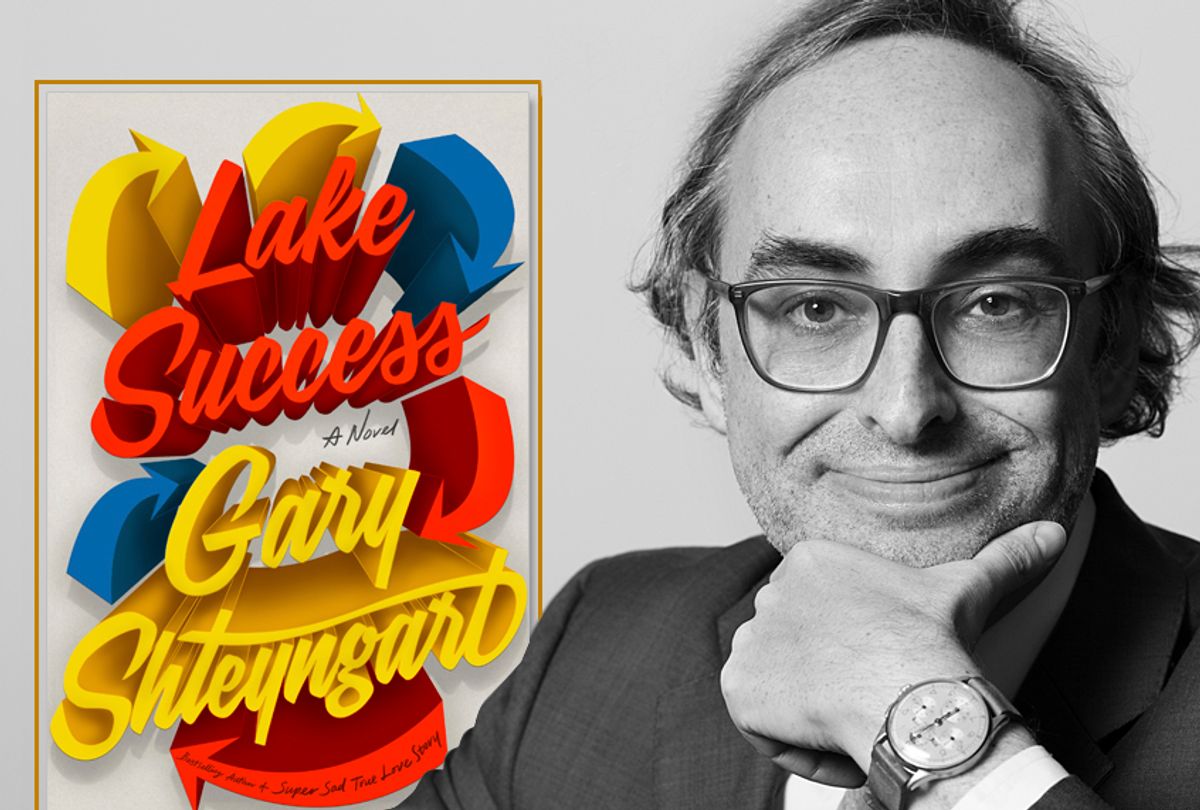 In 2016, Russian born novelist Gary Shteyngart took a bus ride. It was an uncertain time in American culture and politics, and Shteyngart, who's won a devoted following for his bestsellers "Absurdistan, "Super Sad True Love Story" and the memoir "Little Failure," didn't know what would come of the journey. Two years later, he's emerged with not just the first big novel of the post-Obama era, but the first truly great novel of it.

Like Shteyngart, Barry Cohen, the protagonist of "Lake Success," is a New Yorker who finds himself moved to explore the country via Greyhound — aka "the Hound." But Barry is a crazy rich hedge fund manager, a father of a recently diagnosed autistic preschooler, and a man on an impulsive mission to connect with the person he once was. The book is at once a picaresque tale of Barry's travels and a domestic novel of his wife Seema's simultaneous odyssey on the home front. In trademark Shteyngart fashion, it is very funny. And it is likewise deeply human and warm. Without giving anything away, when the ending arrives too soon, it's both surprising and somehow beautifully inevitable.

When I spoke to him recently via phone, I asked what it was like writing a novel in real time 2016 election campaign unfolded, and how the story changed as the nation did."Initially I thought that the T-man was going to be in the background," he says. "I thought, 'Okay, the Republicans went nuts and nominated this imbecile. The book will be about Barry and his journey, and the rest of the political stuff will be in the background.' Of course, as the year continued, I realized that this wasn't just a fluke. When I got on the Hound, my thinking was, 'Of course, Hillary's going to win.' By the time I got off the Hound four months later, I was not as sure. There are scenes of the book were Barry is told by people that she's going to lose Pennsylvania. He's like, 'What? You’re kidding.' That was essentially me. That's the importance of, I think, getting out and seeing the rest of the country."But the author didn't just get a glimpse into the American soul on the road. He got a whiff of a lot more."One of the first things you learn on the Hound is to sit away from the bathroom," advises Shteyngart. "It's not the worst, but there's a line in there where Barry says that people on the Hound talk about where they've gone to prison the way people on the Acela talk about where they go to law school. I think that's about right.If there are ways to not take the Hound, you'll probably opt for them. There were a lot of people who had just left correctional facility or a mental facility. Often, there would be people who were traveling from say, New York to Missouri. These were gigantic journeys; you'd see people who look like they had their entire lives possession stacked under the bus. These were very epic things for very many people."But "Lake Success" is not a mere modern "Sullivan's Travels." It reveals a political climate forged it its own ways as much in the high rises of the Manhattan elite as the barrooms of Pennsylvania, a nation where discontent transcends all class barriers."

"This country is just so fragmented and Balkanized," says Shteyngart. "It’s just in a very unhappy place right now. I grew up in an authoritarian country. I thought after the Soviet collapse it would become more like America in many ways. Civil society, rule of law, elections. But everything's going the opposite way. America is becoming more like Russia. Trump looks at someone like Putin and I think the envy is real. The respect is real, because this is a kleptocrat in the same way that Trump wishes to be. This is somebody who has muzzled the media the way Trump wishes to do. It's a perfect world for him. As somebody born in Russia, finding myself here in an election that has been in part determined by Russia, it's very strange."

I can't help citing Orwell as we talk, and the ways in which the American people gladly invited Big Brother into their homes and phones to monitor their private behavior. "I think a large part of the population, they want the opposite of truth to be beamed into their home — or more importantly onto their screen," he says. "If they can be proven right in their hatred and their racism, they would rather get that news beamed into their device than the hear the truth. I think people aren't that stupid. A lot of people, even people at Trump rallies, know that he was just speaking crap, that none of his stuff really makes sense. That he's lying about everything. We live in a world where people will vote for a lie. What is more '1984' than that?"

"People want entertainment," he continues, "and we've made everything entertainment. Fox is entertainment as well as news. The posts you get which are untrue on Facebook, they're more like fiction. They're like little horror stories to get people into this idea of, 'I don't need the truth. I need this instead. This is what makes me happy.' The Russians have figured out how to weaponize it. The right-wing has also figured out how to weaponize it. They work in concert. The future is really all these societies learning from Moscow. You see what's happening in Western Europe; you see this happening in Eastern Europe as well. They've created this sort of weapon grade virus that can now be transmitted across the world. In many ways, America in 2016 was just very ripe for it."

And that vulnerability isn't just political. Shteyngart's character of Barry, who is so sophisticated in many ways, is also in a very significant other way as deeply in denial as a man can get. Confronted with the reality of his son's diagnosis, he and his wife still deflect questions about what schools the boys is applying to, running away from the truth that their child's less than perfect.

"It’s very New York," says Shteyngart. "It’s very San Francisco. It’s very whatever place has these super competitive elites. You have to be perfect. In Barry’s case, the perfect hedge funder has to be married to the perfect wife, and then have the perfect kids. The kids will go to the best schools. It’s this never-ending competition…. If you're applying to private school in Manhattan, some of these schools accept five percent of their applicants if not less. It's not just the kids being interviewed, it's the whole family being interviewed. You’re coming in there and you have to prove that you're in the top five percent of Manhattan or Brooklyn families. It's hysterical. Why do we do this to ourselves? Why did we create these societies where the competition is everything?" And he wonders, "What happens when there's a monkey wrench in there? When the kid is severely autistic? [Barry's wife] Seema is a loving mother in many ways. But she is also part of this incredibly competitive environment. Who can't even tell the closest people around her that her son is autistic. There’s such a sadness to that. They're such a loneliness to that to not be able to communicate that."

It's a unique kind of loneliness, brought on by our shared cultural delusion that money does indeed buy happiness. "I think that we are a country that weirdly believes that wealthy people are righteous," Shteyngart says. "They've been blessed by God in some ways. The election of Donald Trump, who was an unsuccessful businessman but has a lot of money from his parents, is proof of how we worship this kind of wealth attainment. And people who are poor are morally suspect in some ways. Barry decides that he, just because he made some money back in the day, could become a great philanthropist and leader. You see that across the board. You see that in a lot of people who are from this world of finance who make one good bet along the way. Now think they can run charter schools or be masters of education and all these other things, just because they were smart enough to get into a quasi-fraudulent enterprise to begin with. We do this all the time. There’s this ridiculous credentialism."

He adds, "I've taught at Ivy League institutions. These kids are not smarter than kids from University of Texas at El Paso. They're just not. Many of them have huge advantages. Many of them were taught from early on how to jump through these hoops. You get to this school, then you get into that school. Then you get into Goldman Sachs. Just in terms of their intrinsic intelligence, there's really not a huge advantage. It's just that we as a society dismiss people, whereas we should be limiting the number of people from very high-end institutions to control our world. The Trumpian society benefits when creative people are railroaded into unproductive pursuits. That's what finance is." And though he wrote a book that's memorably entertaining, Shteyngart admits he has an ulterior motive baked in there as well. "My dream is that one person in finance reads this book and drops out of finance," he says. "If that happens, then all my time on the Hound was worth it."

What we don't get about diversity

Why the left needs an education