Conway: "We cannot put decades of pent-up demand for women to feel whole on [Kavanaugh's] shoulders"

"This is starting to feel like a vast left-wing conspiracy," Kellyanne Conway said of claims facing Brett Kavanaugh 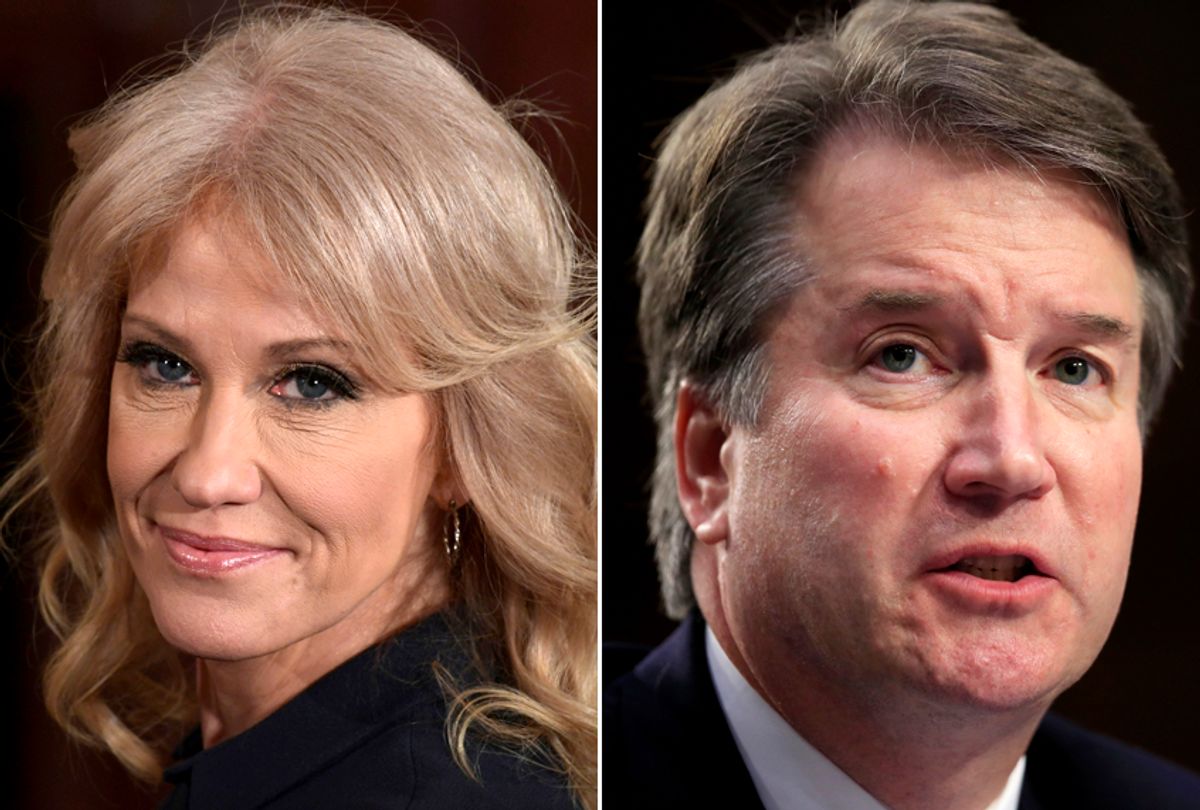 White House adviser Kellyanne Conway sought to discredit the mounting sexual misconduct allegations against President Donald Trump's Supreme Court nominee, Brett Kavanaugh, because they allegedly took place when "he was a teenager" and not "powerful."

"This may be the first time we ever heard of allegations against someone as a teenager who did not prey upon women thusly as he became powerful," Conway said Monday during an interview on "CBS This Morning."

"It’s when men become powerful and think that they can use women and interrupt their careers if they want to for their own predatory proclivities that then they start preying upon women," she added. "The allegations against Judge Kavanaugh are all from when he was a teenager, and then we’re supposed to believe he’s a judge of a dozen years hiring female law clerks."

Kavanaugh has been accused of attempted rape by Christine Blasey Ford. The incident allegedly occurred when the two were in high school in the early 1980s. Ford, who is now a psychology professor in California, initially sent a confidential letter detailing the allegation to her congressional representative, Rep. Anna Eshoo, D-Calif., along with Sen. Dianne Feinstein, D-Calif., in July. After the contents of the letter leaked to the press, Ford stepped forward to identify herself as Kavanaugh's accuser. Kavanaugh has repeatedly denied the allegation.

Ford and her lawyers were engaged in a week-long battle with Republicans on the Senate Judiciary Committee over the terms under which she would be comfortable testifying for a private hearing. They had come to an agreement over the weekend that she would testify Thursday, delaying a vote to confirm Kavanaugh. Conway said committee Republicans have made "tremendous, unprecedented accommodations" for Ford.

But then, on Sunday, the New Yorker published a report by Ronan Farrow and Jane Mayer that Senate Democrats were investigating a new claim of sexual misconduct stemming from when Kavanaugh was a freshman at Yale University. The second accuser, Deborah Ramirez, now 53, alleges that Kavanaugh exposed himself and thrust his penis in her face at a dormitory party.

Kavanaugh described the new allegation as a "smear, plain and simple." He added, "I look forward to testifying on Thursday about the truth, and defending my good name—and the reputation for character and integrity I have spent a lifetime building—against these last-minute allegations."

Michael Avenatti, the lawyer who represents the adult film star Stormy Daniels, also Sunday said that he represents "a woman with credible information regarding Judge Kavanaugh and Mark Judge." He added that this woman is not Ramirez or Ford.

"This is starting to feel like a vast left-wing conspiracy," Conway said on CBS regarding the new allegations.

"I know there's pent-up demand for women to get their day, women who have been sexually harassed and sexually assaulted, and I personally am very aggrieved for all of them," she continued. "But we cannot put decades of pent-up demand for women to feel whole on one man's shoulders. What exactly is the standard for ruining one man's life based on decades of allegations that have nothing to do with him?"

Many conservatives and Kavanaugh supporters have framed the decades-old sexual assault allegations against him as having the potential to destroy Kavanaugh's life, rather than being a possible bar to joining the Supreme Court. There are no criminal charges against Kavanaugh, but the allegations speak to Kavanaugh's integrity, character and moral fitness to serve on the highest court of the United States.

On CBS, Conway was asked about the president's tweets on Friday, where he alleged that if Ford had actually been sexually abused "as bad as she says," she would have reported her claims. Conway acknowledged that while some women do not report sexual assault "because they fear not being believed," they also decline to come forward "because of other women who make false accusations," she said, "so it cuts both ways."

"I just don't think one man's shoulders should bear decades of the #MeToo movement," Conway added.

Noël Wells to men: Shut up and listen

"Master of None" star demands respect.