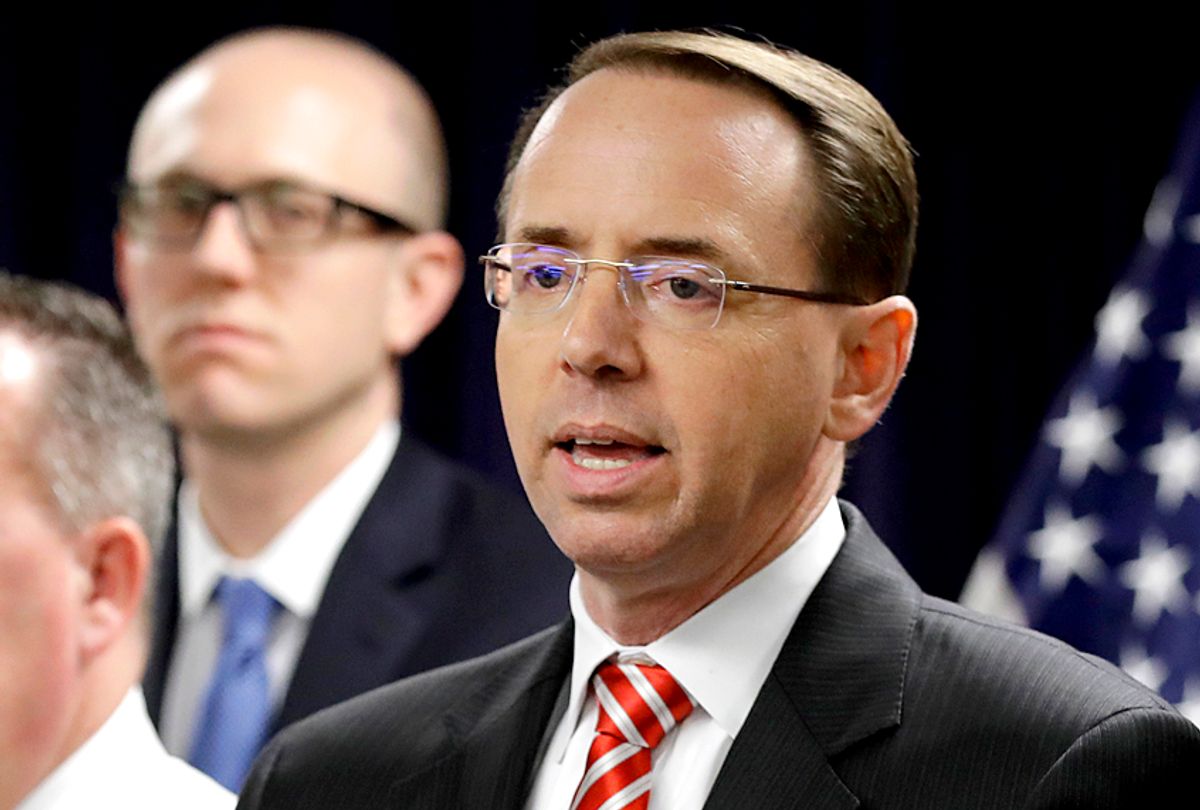 "If the President really wants to get rid of the lingering stench at the Department of Justice, he must appoint former federal prosecutor Sidney Powell as Rod Rosenstein's successor," Michael Caputo, a major Republican political strategist and media consultant, told Salon by email. Caputo served as Trump's communications adviser during the crucial New York presidential primary in 2016 and has a history of working for Republican presidents stretching back to Ronald Reagan and George H.W. Bush.

"A remarkable attorney and author of the landmark book 'Licensed to Lie: Exposing Corruption in the Department of Justice,' Ms. Powell is the right person to fumigate Main Justice and reform the department to once again serve the people of the United States," Caputo argued.

On her official website, Powell's legal background is described as having "practiced law, primarily in the Fifth Federal Circuit for decades. She has been lead counsel in more than 500 federal appeals — 350 of them as an Assistant United States Attorney and Appellate Section Chief in the Western and Northern Districts of Texas. She is a past president of the American Academy of Appellate Lawyers and the Bar Association of the Fifth Federal Circuit, and a member of the American Law Institute."

Rosenstein, a registered Republican, may be on his way out due to unverified claims that he discussed wearing a wire while speaking to President Trump in 2017, and even the possibility of invoking the 25th Amendment to remove Trump from office.

Another former political adviser for Trump's campaign, Sam Nunberg, talked to Salon about the qualities he believes a new deputy attorney general would need to possess.

"The first quality is that the deputy AG, since they will be supervising the special counsel investigation, should not be conflicted out of the investigation, nor should the new deputy AG be a witness to the investigation or supervisor," Nunberg told Salon. "Number two, the deputy AG should take his or her oath to the constitution, to Article II of the executive branch, seriously, and not threaten or joke about setting up this President of the United States for the 25th amendment. And third, this deputy AG should respect and honor the legal constitutional authority of Article I congressional branch's oversight of investigations, and answer and honor all subpoenas in a timely and fair manner."

When it comes to the president's biggest supporters in conservative media, the attitude on how to respond to the Rosenstein crisis wildly differ.

"If the New York Times reporting is accurate, the president tonight should seriously consider whether Rod J. Rosenstein should remain on the job," declared Fox News host Laura Ingraham, according to The Washington Post. "We just cannot have this plotting at the highest levels of our Justice Department against the chief executive of this executive branch."

Meanwhile, Sean Hannity, who has a reputation for perhaps being the president's biggest supporter among the Fox News crowd, urged the president to exercise restraint.

“We are experiencing tonight a massive constitutional crisis. And frankly, this is designed to set up the president. I have a message for the president tonight. Under zero circumstances should the president fire anybody," Hannity said on air.

What is Roger Stone hiding?