Major anti-LGBT group is ready, with at least four cases on established rights heading for the Supreme Court 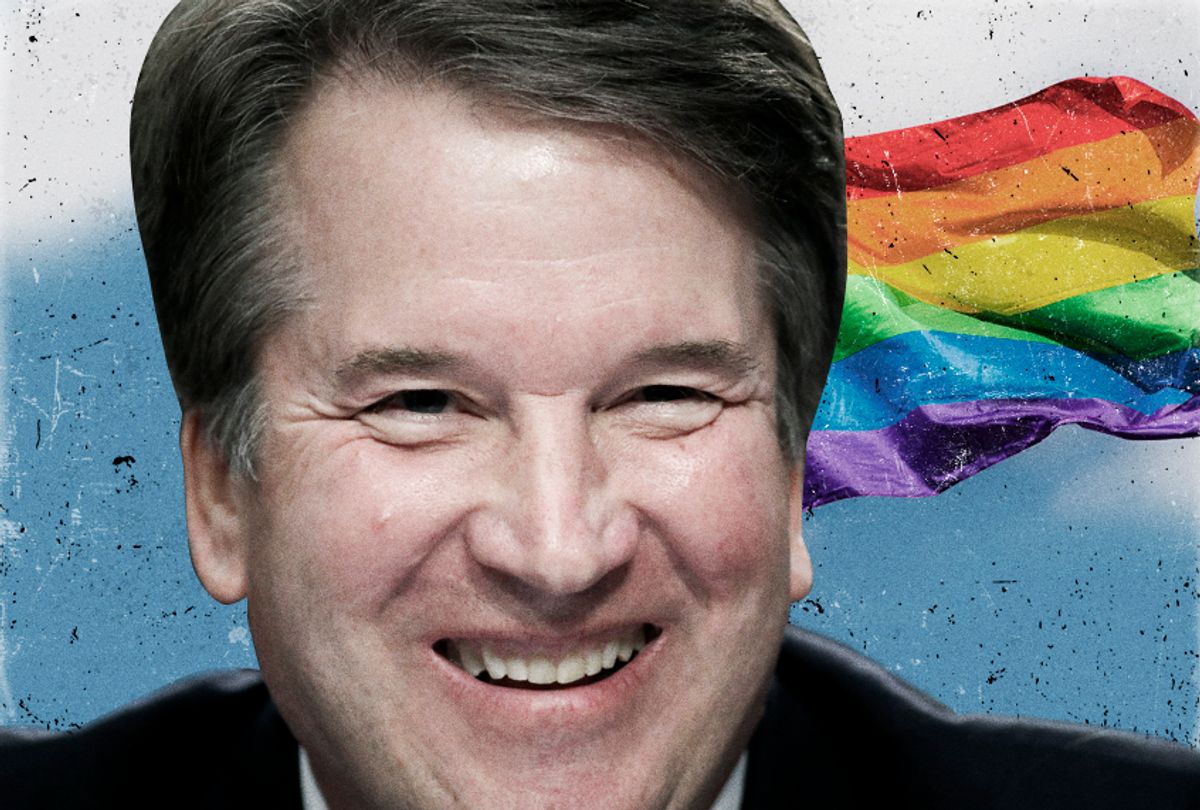 The threat to women's rights has been the main focus of the public debate over Brett Kavanaugh, Donald Trump's nominee to replace Anthony Kennedy to the Supreme Court. During the confirmation hearing, Kavanaugh's evident hostility to abortion rights — and even birth control — was heavily discussed, and after two credible accusations of sexual abuse during Kavanaugh's high school and college years, remain at the center of a swirling national controversy.

Kavanaugh is a major and immediate threat to legal abortion, which was only protected because Kennedy offered the fifth vote, however reluctantly, to uphold the principle enshrined by the court's Roe v. Wade decision in 1973.  But it's not just women who are under threat. Kavanaugh is widely perceived as further to the right on LGBT rights issues than Kennedy. And if he is seated on the high court, there is a strong chance that Kavanaugh will become part of a majority that will vote to start rolling back LGBT rights within the next year.

“Kennedy, over the course of his career, was a champion for the rights of lesbian, gay and bisexual people," James Esseks, the director of the ACLU Lesbian Gay Bisexual Transgender & HIV Project, told Salon. "The prospect of having him replaced by someone who may well be more conservative on those issues, as well as others, seems like an opportunity to folks like ADF, and it seems like a grave threat in the LGBT advocacy movement."

Esseks was referring to Alliance Defending Freedom, a virulently anti-gay organization that not only has fought against marriage equality, but also in favor of retaining "sodomy" laws that made it criminal to have same-sex relations in the privacy of your own home. ADF is well-funded and has been busy over the past few years, filling the court pipelines with cases meant to undermine local and state anti-discrimination laws that shield LGBT people from discrimination. Typically, the ADF tries to argue that religious freedom, free speech or privacy rights — causes more often associated with the left — are somehow undermined by allowing LGBT people full equality.

ADF was the organization behind the widely covered Masterpiece Cakeshop vs. Colorado case that was decided in June, in which a bakery owner argued that his religious beliefs prevented him from following Colorado's ban on anti-gay discrimination and that he therefor had a right to deny a wedding cake to a same-sex couple. In that case, the ADF tried to fluff up its "free speech" claims by arguing that this wasn't a case of blanket discrimination, but that a custom-made wedding cake should be treated as a form of speech and an implicit endorsement of same-sex marriages. Kennedy punted on the case, issuing a narrow ruling that sidestepped the central issue of whether "religious freedom" overrides anti-discrimination laws.

Kennedy has now retired, and ADF is mounting cases that make even broader arguments regarding the illegitimacy of anti-discrimination laws. Salon identified at least four cases sponsored by ADF that are clearly meant to carve large loopholes in anti-discrimination policies or gut them altogether. Two of these cases may be ruled on within the next year.

One of the more immediate cases is EEOC vs. Harris Funeral Homes, in which ADF is arguing that a funeral home had a right to fire funeral director Aimee Stephens, who is trans, because she wanted to wear women's clothes and her boss insisted she dress as a man. The ACLU is representing Stephens, arguing that it violates a previous court ruling against sex stereotyping to insist that a person's clothing be dictated by her gender assigned at birth rather than her lived gender. The Supreme Court has never examined the question of whether or not trans people's right to live as their own gender is covered by this ruling, and there's a strong chance it will do so within the next year, especially if Kavanaugh is seated.

If the court accepts the argument that "religious freedom" gave Harris Funeral Homes a right to fire Stephens, Esseks warned, "They would blow a massive hole into every civil rights law in the entire country." In effect, this could open the door for any employer or business to claim the right to discriminate against LGBT people, women or people of color, so long as that employer cites religious beliefs for doing so.

Another case that's moving rapidly towards the Supreme Court is Doe vs. Boyertown Area School District. Boyertown's policy is to allow trans kids to use bathrooms and  locker rooms corresponding to their lived gender, and ADF is representing students who are suing the school district, claiming that it violates their privacy rights to share a bathroom with trans kids. Kavanaugh has expressed skepticism in the past about the right to privacy when it comes to birth control and abortion, but there's good reason to worry he will buy ADF's arguments in this context.

That could lead to a darkly ironic situation where the Supreme Court rules that one person's right to privacy requires dictating and controlling the private decisions of another person -- but that when it comes to a woman's body, there is no privacy right that allows her to control if and when she gives birth.

Two more cases are not as far along in the pipeline, but follow the same pattern of arguing that trans equality somehow violates the rights of cisgender people. In Alaska, a homeless shelter is demanding the right to exclude trans people because of objections to their gender identity. And the baker behind the Masterpiece Cakeshop case is back in court again, this time objecting to making a birthday cake for a trans woman.

These cases "are in a much wider range of context" than the original Masterpiece Cakeshop claim, Esseks noted. In that case, there was at least some plausibility to the claim that a wedding cake could be construed an artistic expression that implied support for same-sex marriage. No such argument can be made about letting a woman to wear women's clothes to work, letting kids use the bathroom in peace, or making a birthday cake for a trans woman. The shift to flimsier and more far-reaching claims, however, may not matter -- and could be deliberate, since ADF is counting on a Supreme Court that strongly opposes LGBT rights.

It's noteworthy, of course, that all four of these cases involve trans rights, which is a notable shift away from previous ADF cases targeting efforts by same-sex couples to get married and to be treated equally during that process.

The organization "had put a whole lot of time and effort and money and resources into marriage fights," Esseks said. But that went for nought, because "the public’s understanding of who same-sex couples are evolved," and support for marriage equality became widespread.

So now, Esseks argued, ADF wants to pivot to cases where it can "exploit transphobia."

"They’re taking advantage of the fact that America is at the beginning of a journey of learning, understanding and acceptance about transgender people," he said. Trans people are still a soft target, politically speaking, and can therefore be used to advance larger legal arguments that "religious freedom," "free speech" and "privacy" somehow give Christian conservatives overarching rights to exert control over other people's lives, from the way they dress to the very ability to use the bathroom in peace.

Kavanaugh's long legal history already suggests that he was a reliable vote on pretty much every issue embraced by the religious right. But the ferocity that Republicans are bringing to the fight over his confirmation, steamrolling over what now seems to be multiple serious and credible allegations of sexual assault, makes clear that there's a reason that they want this particular justice so badly. One of the most likely reasons is that they know Kavanaugh will be a warrior in the right's campaign against equal rights for LGBT people, and against the concept of equality in public life more generally.