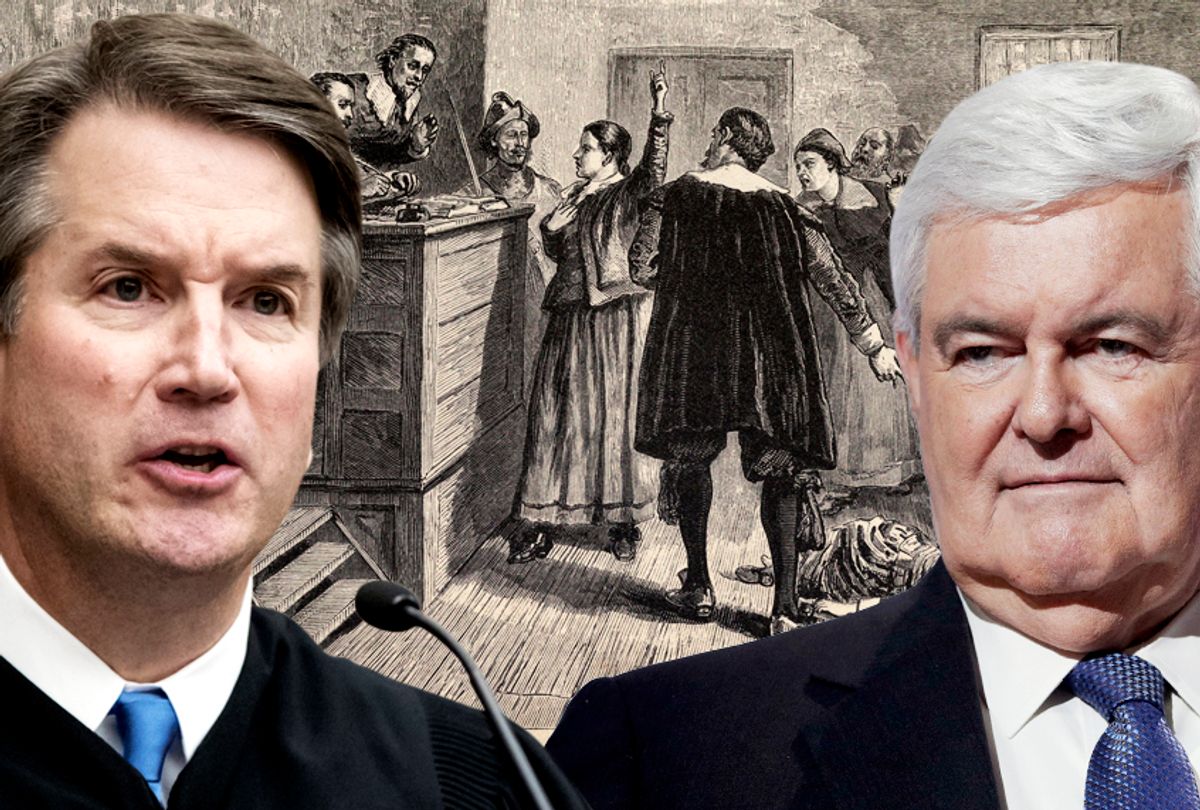 As the allegations of sexual misconduct mount against Brett Kavanaugh, a conspiracy theory about #MeToo hysteria has been brewed up by President Donald Trump's favorite news channel. Sean Hannity joined his Fox News colleagues Tuesday night as he asked his guest, Newt Gingrich, how Americans were to think about "so many Democrats rushing to judgment -- no presumption of innocence."

To put the situation "into context," Gingrich invoked one of the most famous works ever written in by an American author. "I was struck earlier today that Arthur Miller's great play 'The Crucible,' which is about the Salem witchcraft trials, actually relates to what's happening to Judge Kavanaugh," the former Republican House speaker said. "What he's being put through is almost like a medieval torture."

As Gingrich and Hannity stoked fears of a #MeToo sex panic that may claim legions of innocent victims, they failed to move beyond a surface-level comparison to their literary model. Apparently lost on the pair of Republican talking heads was the one thing every student of American literature learns when they read Miller's Tony Award-winning 1953 play. The story of the Salem witch trials told in 'The Crucible' is, in fact, an allegory for the "red scare" of the 1950s, led by Sen. Joseph McCarthy and other paranoid Cold War Republicans.

During that harrowing time in our nation's history, McCarthy and his allies tore apart the lives of hundreds of innocent Americans who were accused of communist ties on flimsy evidence or none at all – a history that still looms large over the present-day GOP. A huge difference between McCarthyism and the accusations facing Kavanaugh, of course, is the fact that multiple women with corroborating witnesses have come forward to testify under penalty of perjury that their allegations against the Supreme Court nominee are true. The women have further asked for an impartial FBI investigation, which they believe will ultimately support their claims.

"What the American people should think is that you have a Democratic Party so desperate to stop the Supreme Court from becoming conservative that they are prepared to lie, to smear, to be hysterical, to break Senate rules, to do whatever they have to do," Gingrich said to Hannity. "What you're watching is totally desperate."

Democrats, by in large, are not presuming Kavanaugh guilty until he is proven innocent. They are merely asking for his accusers' stories to be heard – an opportunity that has historically been denied to women, including those in both the Salem witch trials and in McCarthy's circus.

"Somebody shows up 35 years later. Everybody in the audience ought to think about this: Close your eyes for a second," Gingrich told Hannity's viewers, "and ask what you were doing on June 12, 35 years ago. The truth is you almost certainly don't know."

While it is certainly more complicated to piece together what happened 35 years ago than 35 days ago, it remains mankind's noblest effort to discover the truth. However, as in the days of McCarthy, Republicans do not seem to want the truth if it inconveniences their grip on power.

The quest for truth is perhaps more necessary than ever when the president of the United States dismisses the work of a free press as "fake news," his counselor Kellyanne Conway spins "alternative facts" on live TV and his lawyer Rudy Giuliani argues that "truth isn't truth."