Brett Kavanaugh's accuser came off as sympathetic to even conservatives on Twitter. Rachel Mitchell? Not so much 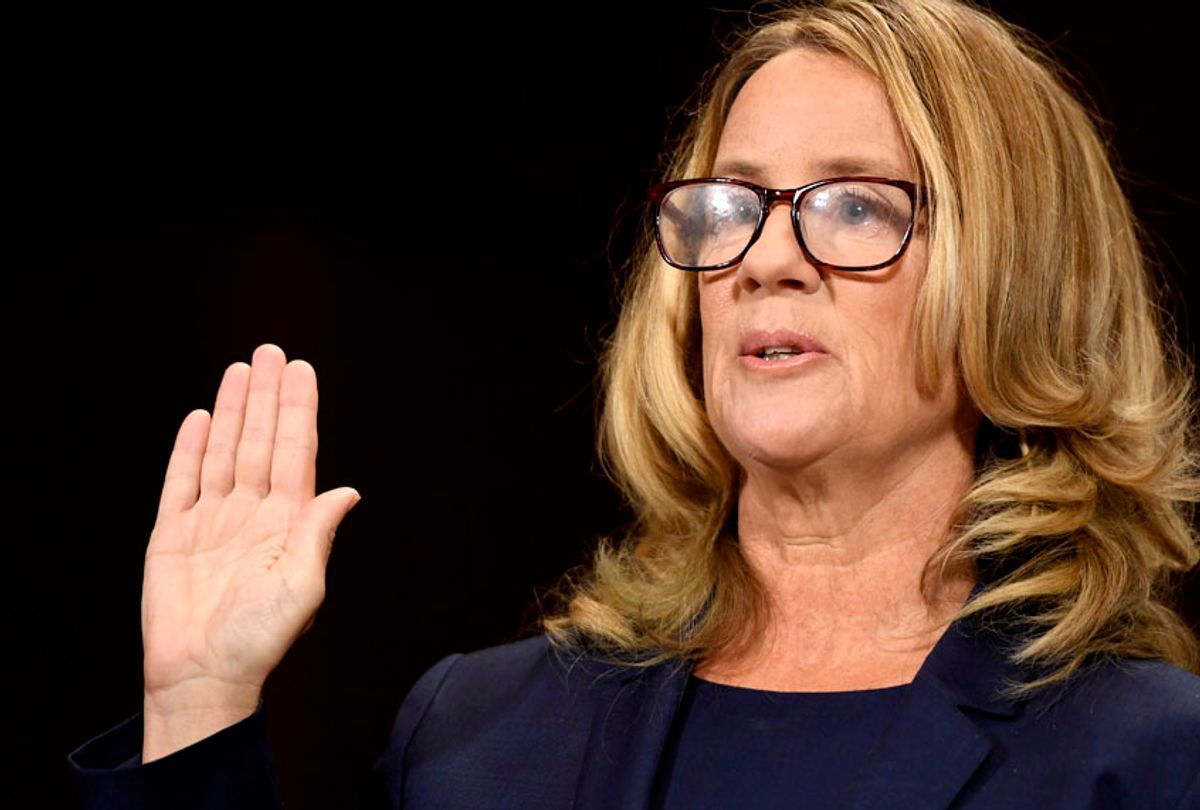 Christine Blasey Ford is sworn in to testify before the Senate Judiciary Committee on Capitol Hill in Washington, Thursday, Sept. 27, 2018 (AP/Saul Loeb)
--

Not every Republican was moved by the testimony of Christine Blasey Ford, the California research psychologist who has accused Supreme Court nominee Brett Kavanaugh of attempting to rape her when they were teenagers, but a notably large number have observed that her credibility has seriously undermined Kavanaugh's candidacy.

"The accusations brought against Judge Kavanaugh are sickening and deserve an independent investigation. There should be no vote in the Senate," tweeted Gov. Charlie Baker of Massachusetts, a Republican.

Byron York, the chief political correspondent for the conservative Washington Examiner, tweeted that "To put it mildly, this hearing isn't working for GOP. Dems are asking big, meaningful questions. What do you remember? What did you feel? Could it have been anyone else? Getting big, meaningful answers. GOP's Mitchell focusing on little stuff. Huge contrast."

Meanwhile Liz Mair, a Republican communications strategist who has worked for former Texas Gov. Rick Perry, Wisconsin Gov. Scott Walker and Sen. Rand Paul of Kentucky tweeted that "I'm pretty confident Kavanaugh will go down after this. Martha McSally doesn't want to run on being an R with this, given her personal story. Dean Heller doesn't want to have to cast a vote here. Susan Collins and Murkowski are unlikely to be OK w Kavanaugh."

A similar thought was expressed in a tweet by Jason Howerton, the director of engagement at the conservative outlet CRTV.

"Do Republicans even have time to get Amy Barrett confirmed before midterms? I think this nomination is over. Kavanaugh has not been proven guilty, but that's not what this is about anymore," Howerton observed.

According to a tweet by Vanity Fair special correspondent Gabriel Sherman, the president himself is worried that Blasey was credible in her testimony.

Jennifer Rubin, a leading conservative critic of President Donald Trump, elaborated on the reaction to Ford's testimony in her column for The Washington Post.

Only the cruelest partisans who watched or listened to Christine Blasey Ford’s opening statement Thursday could be unmoved. The quiver in her voice, just short of tears, made her statement, which in writing seemed unexceptional, arguably the most gripping testimony most of us have ever heard. Her sincerity, and her pain, cut through weeks of gum-flapping on cable TV news. Here was a woman raw with emotion, visibly scared and utterly without guile.

Even Fox News, a network that is known for its pro-Trump views, couldn't hold back on claiming that Ford's testimony was credible.

Fox News host Chris Wallace described Ford's testimony as "extremely emotional, extremely raw, and extremely credible," and Fox News judicial analyst Andrew Napolitano reinforced that idea by adding that "I think Dr. Ford is exceptionally credible." Anchor Bret Baier added that, now that he had heard from Ford directly, he had to admit that it "is a totally different thing" from simply reading the transcript of her prepared testimony.

This isn't to say that all Republicans and conservative have been sympathetic to Ford. Donald Trump Jr. tweeted skepticism about Ford's claim to fear flying, writing that "I’m no psychology professor but it does seem weird to me that someone could have a selective fear of flying. Can’t do it to testify but for vacation, well it’s not a problem at all."

Sean Davis, the co-founder of the conservative site The Federalist, tweeted that "Ford just changed her story again (for a fifth time? sixth time?) about how many people were present at this alleged party." He also tweeted that "curiously, she is 0% confident in the time, day, date, year, or location of the alleged incident." Similarly, Guy Benson, the political editor of Townhall.com and a Fox News contributor, tweeted that "Ford says she can't guarantee there were only 4 people at the party, as she attested in the Feinstein letter. Also says she can't be sure it was Kavanaugh, not Ford, who pushed her into the room, as she wrote. Later adds there's 'absolutely' no chance this is mistaken identity."