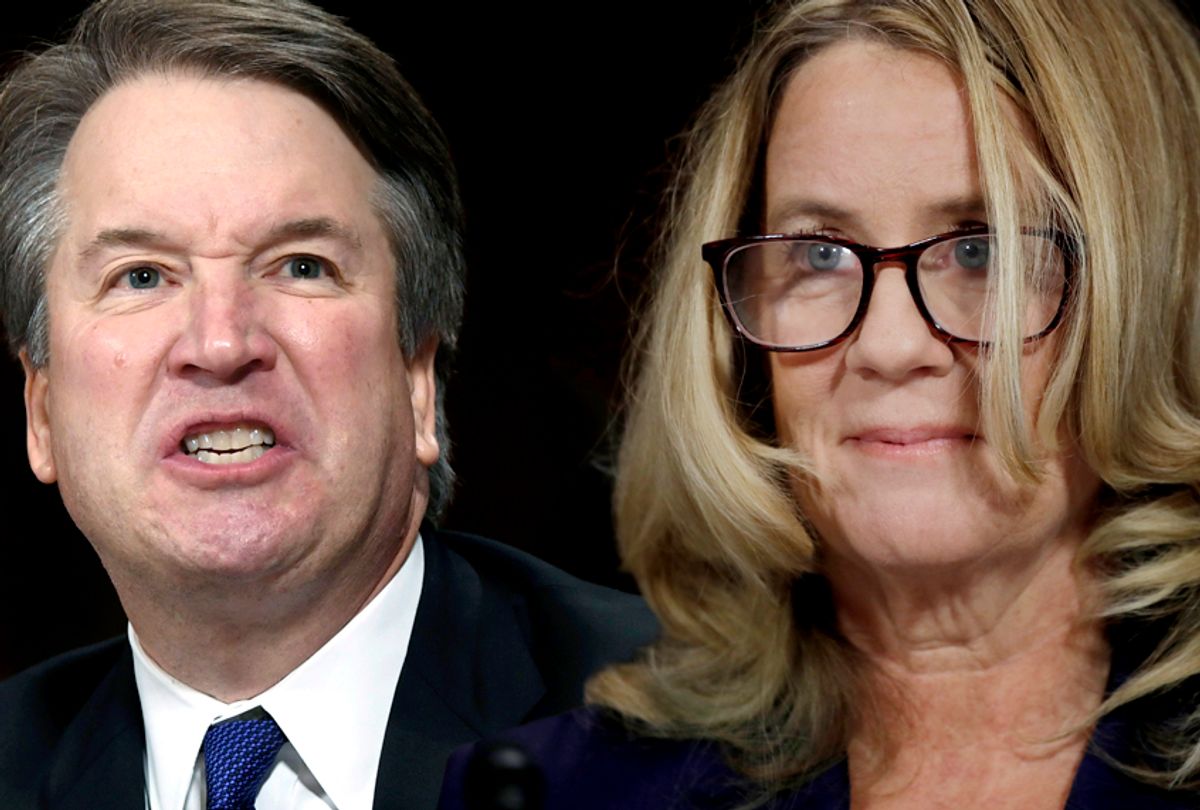 If Plan A for Republicans seeking to protect Brett Kavanaugh, Donald Trump's Supreme Court nominee, from allegations of sexual assault was to paint his accuser, Christine Blasey Ford, as a liar, that hope was shattered in the first hour of her testimony. Despite the efforts to punch holes in Ford's story by Arizona prosecutor Rachel Mitchell — hired by Republican senators who were unwilling to question her themselves — Ford was undeniably compelling, remaining steady amid the obvious stress of the situation and visibly buoyed by her conviction that she is telling the truth. Between the powerful nature of her testimony and the realization that it's not as fashionable as it once was to write off sexual accusers as lying sluts, Republicans realized that the old playbook wasn't going to work this time.

So they turned to Plan B: A bonkerballs conspiracy theory that Ford was somehow being manipulated by conniving Democrats into saying untrue things about Kavanaugh.

Call it the Manchurian Victim conspiracy theory. Ford and her family members were victims, Republican after Republican stated in sanctimonious tones. Clearly she means well, they expressed in maudlin tones, but is simply unaware that she is being controlled by the almighty powers of the shadowy Democratic conspiracy.

Christine Blasey Ford, brainwashing victim, was a theory that seemed like it had died an ignominious death after Kavanaugh's good friend, Ed Whelan, went on Twitter and falsely accused a man who, it turns out, had briefly dated Ford in high school. But it came roaring back to life on Thursday during this farce of a hearing when Kavanaugh, screaming with rage during his opening remarks, attributed the sexual assault allegations to "millions of dollars in money from outside, left-wing opposition groups" working to get "revenge on behalf of the Clintons."

He insisted that while he was "not questioning that Dr. Ford may have been sexually assaulted by some person in some place at some time," it wasn't him. The implication seemed to be that he had been accused by Democratic senators, not by a specific woman who identified him without a shadow of a doubt.

Republicans eagerly backed this idea, with one after another agreeing with Sen. Lindsey Graham, R-S.C., that Kavanaugh was a victim of the Democratic conspiracy and Ford was "as much a victim."

Of course, the timeline shows quite the opposite: Prior to Kavanaugh's nomination, Ford made efforts to discourage his nomination by calling her congressional representative in California, Rep. Anna Eshoo, and the Washington Post. Neither responded until after his nomination. Prior to the confirmation hearing, Ford also sent an anonymous letter to Sen. Dianne Feinstein. Every step along the way, the record shows Ford reaching out to Democrats and the media for help, not the other way around.

The lack of confidence Republicans felt in the Manchurian Victim theory was on display throughout the hearing. It was barely even mentioned to Ford herself, whose background in research psychology presented a clear threat to the junk science on which Republicans were resting this idea. It took a Democrat, Sen. Dick Durbin of Illinois, to present the idea by asking Ford if this was a "mistaken identity" case, to which she replied that she was "100 percent" confident that it was Kavanaugh who had attacked her.

This lack of faith was also demonstrated by the Republican unwillingness to call any other witnesses, allow an FBI investigation, or even have the courage to ask Ford any actual questions of their own.

But in a practice Kavanaugh and his friends from Georgetown Prep were clearly familiar with, once Ford was out of the room Republicans loosened up and start talking about her behind her back. They floated this risible theory painting Ford as a stooge who is somehow being mind-controlled by the Democrats to believe that Kavanaugh was the guy who assaulted her. After Ford's departure they also stopped leaning on their crutch, Rachel Mitchell, and just started ranting, one after another about this alleged conspiracy by the Democrats.

This whole elaborate conspiracy theory strategy became even harder to swallow as Democrats calmly tore apart Kavanaugh's testimony and showed him, repeatedly, to be liar — one prone to telling obvious and easily disputed lies. Kavanaugh kept insisting that he had been an upstanding student and a moderate drinker in high school and college, and stuck to that story despite Democrats pointing out for hours that he was well-known in his social circle as a hard drinker and had even bragged about it in his yearbook.

One particularly surreal interaction involved Sen. Sheldon Whitehouse, D-R.I., asking Kavanaugh about his yearbook entry, in which he is listed as the "Beach Week Ralph Club Biggest Contributor." While admitting that "ralph" was '80s slang for vomiting, Kavanaugh insisted that it was merely a reference to his "weak stomach" and acted offended that anyone would believe that it is a reference to drinking to the point of vomiting.

Similarly, Kavanaugh's claim to have never blacked out from drinking is belied by his own 2001 White House email, released during the original confirmation hearing, in which he apologizes to his friends for "growing aggressive after blowing still another game of dice," to which he added "don't recall."

Kavanaugh released a similar howler in his explanation — under oath! — of what the yearbook was talking about when it labeled him and other boys as "Renate Alumnius." When asked about this reference by Whitehouse, Kavanaugh said that the girl referred to "was a great friend of ours, a bunch of us went to dances with her. She hung out with us as a group. The media circus that has been generated by this thought and reported that it referred to sex."

Does anyone actually believe this? Odds are no, especially not when Kavanaugh spent the hearing behaving every inch the as bullying, entitled frat boy he denies being. But as with the ridiculous conspiracy theory, credibility was clearly not the point of the Republican claims during this hearing. Kavanaugh and the Republican senators were there to churn out a bunch of talking points for the base to cling to. Logic, consistency and believability don't matter. After all, this is the age of Trump. He lies all day, every day, about everything, and the base eats it up. The Fox News audience just needs some talking points to repeat and some conspiracy theories to cling to, and they're good to go. The rest of us, it appears, don't matter to Republican politicians at all.

Why should we? Once Kavanaugh is on the court, they can gerrymander the election maps to hell, and there will be no court to stop them. The majority of Americans may be appalled at the blatant lies, but the whole point of this exercise is to make sure the majority doesn't matter.

Christine Blasey Ford may be destined, like Anita Hill before her, to be a tragic figure. She was this oasis of clear-headed competence, decency and genuine commitment to the value of truth and civic duty. All that is likely to be crushed under the heel of the delusional, conspiracy-minded liars who run this country at the moment. It's enough to make someone want to get as drunk as collegiate Brett Kavanaugh -- the one the current Brett Kavanaugh, in tones of screaming rage, claims never existed.