We finally saw Brett Kavanaugh's true colors — and Republicans loved it. He may be Donald Trump's perfect legacy 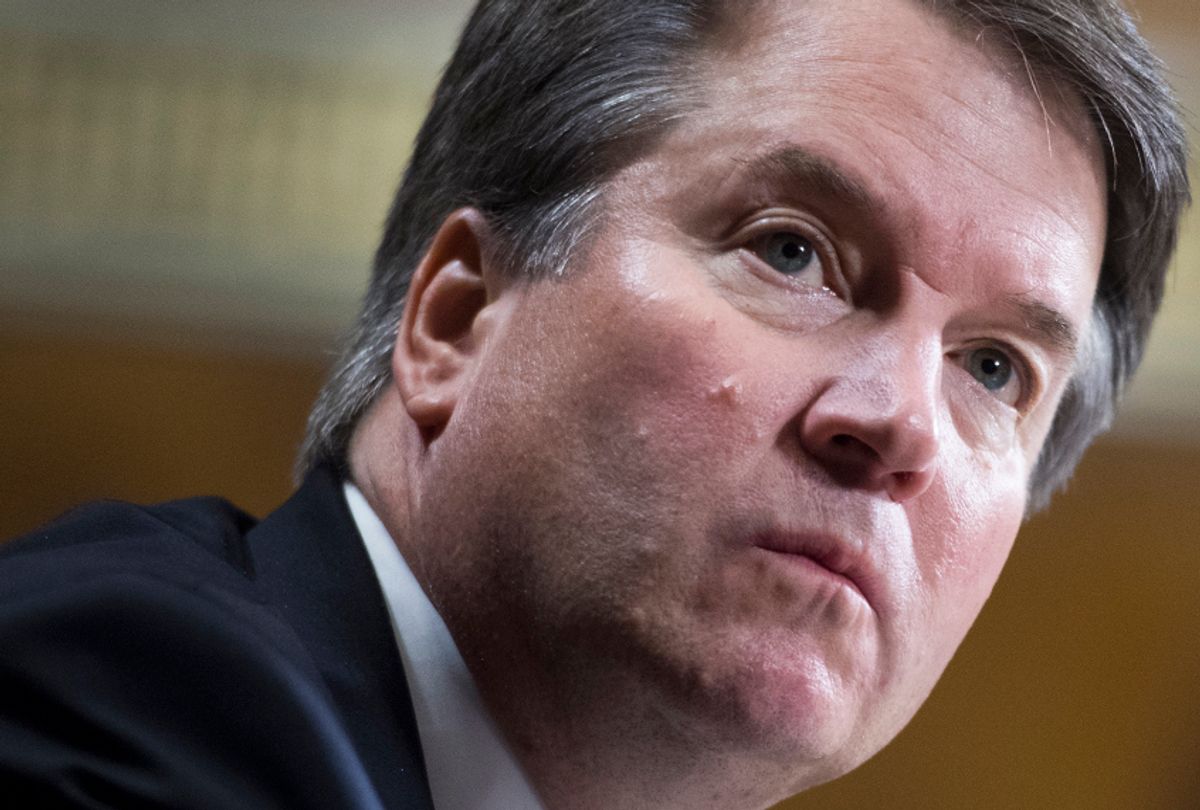 I'm not a lawyer, but I would imagine that if one has a client who has been accused of sexual assault it would not be an obvious strategy to have him yell and cry in angry, red-faced fury, denying that he could ever do something so terrible. Neither would it seem to be a good idea for a man in such a position to behave as if it were an affront that someone with his elite credentials should ever even be asked to answer to such charges. One would think that any good lawyer would want her client to present himself as a sober, thoughtful, empathetic person, willingly answering questions and submitting himself to whatever inquiries would clear his name.

But what do I know? Brett Kavanaugh, elite Yale-trained lawyer and federal district court judge, nominated to the highest court in the land, adopted the first strategy in his hearing before the Senate Judiciary Committee on Thursday. He broke with every conventional notion of principled judicial temperament and defending himself as if he were a Tea Party congressman appearing on Alex Jones' Infowars. He threw away his prepared opening statement and ranted and raved for more than 40 minutes, when he wasn't indulging in unctuous whining about the unfairness of it all or cloying sentimentality.

At times, Kavanaugh barely held back tears as he discussed how difficult this nomination has been for his family, which is perfectly understandable. But he also, more mysteriously, choked up as he discussed his habit of calendaring his high school years or remembered his buddies on the basketball team. It was, to say the least, highly emotional and very dramatic.

After having been forced to sit in sullen silence as Dr. Christine Blasey Ford gave her searing, heart-wrenching, controlled testimony -- that nobody on the planet could believe was contrived or inauthentic -- committee Republicans had been despondent, worrying that they might not "plow through this," as Majority Leader Mitch McConnell had promised. She was an extremely effective witness. So they were downright giddy about this operatic, Trumpian spectacle from Kavanaugh.

But after Sen. Dick Durbin, D-Ill., landed a highly effective blow by making it obvious that there was something very strange about the fact that Kavanaugh would not ask the White House to reopen the FBI background check process and question the witnesses who he insisted would back up all his claims, things changed. Republican senators shuffled off Rachel Mitchell, the "female assistant" they had tasked with asking questions of Ford, and went nuclear.

Sen. Lindsey Graham, R-S.C., led with a display of fiery temper that suggests he's been watching way too many Jack Nicholson movies. The wild-eyed expressions and tone of his voice were full of vicious, splenetic wrath. Graham was so proud of himself that he tweeted out links to his hysterical performance:

This laughable declaration, from a guy who was a House manager of Bill Clinton's failed impeachment trial on behalf of one of Ken Starr's dirt-digging partisans, was particularly rich:

To my Republican colleagues, if you vote no, you’re legitimizing the most despicable thing I have seen in my time in politics.

The death of John McCain seems to have liberated Graham from the necessity to pretend that he is anything but a ruthlessly ambitious political hack embracing Trumpism with both arms.

Kavanaugh was little better. He too launched a blatantly partisan attack, revealing a temperament and a worldview that does not belong on any court, and certainly not the highest court in the land, which routinely hears politically charged cases with deep resonance in the culture and society at large. He coined a clever phrase -- "advise and consent has turned into search and destroy" -- although it doesn't have quite the ring of Clarence Thomas' "This is nothing but a high-tech lynching."  On the other hand, as angry as Thomas was during the Anita Hill hearing he never personally sank to Kavanaugh's level:

This whole two-week effort has been a calculated and orchestrated political hit, fueled with apparent pent-up anger about President Trump and the 2016 election, fear that has been unfairly stoked about my judicial record. Revenge on behalf of the Clintons and millions of dollars in money from outside left-wing opposition groups. This is a circus. The consequences will extend long past my nomination. The consequences will be with us for decades.

It's one thing for a power-drunk politician like Graham to turn into a ferocious partisan attack dog, but Supreme Court nominees who claim they are simply "umpires calling balls and strikes" speaking in such paranoid, conspiratorial terms is disqualifying all on its own. (Or at least it ought to be.) In another time, such an accusation by a man seeking a lifetime appointment to the high court would be scandalous.

However a professional character assassin like Kavanaugh would see it (and however much he wants to curry favor with his patron in the White House), his conspiracy theory doesn't hold up. Yes, Democrats wanted to defeat him. They went after his record as hard as they could -- and were thwarted by the majority at every turn. That's hardball politics, especially when the stakes are this high.

But Ford's accusation against him is legitimate, important and highly credible. Republican caterwauling about the "delay" caused by her testimony was nothing more than misdirection and posturing. There is no deadline. The party that cynically held a Supreme Court seat open for nearly a year in order to fill it with one of their own have a lot of nerve, wringing their hands over a couple of weeks. But then, accusing the Republicans of hypocrisy is a fool's game. They are shameless, and without shame the concept of hypocrisy is meaningless. After that hearing, it's obvious that all concept of dignity and decency have finally been put out to pasture as well.

Word is that President Trump was ecstatic that Kavanaugh "fought back." Needless to say, the fact that the nominee behaved like a petulant child, blaming the Democrats and raging at the unfairness of everything for hours on end, was received as the tribute it was meant to be. If Senate Republicans "plow through" and confirm Kavanaugh to the Supreme Court -- as they probably will in spite of multiple, credible accusations of sexual assault and extensive lying -- that will stand as Donald Trump's perfect legacy.