Senate Republicans: Would you trust Brett Kavanaugh alone with a woman you care about?

Nothing can convince Republicans to vote against Brett Kavanaugh, although they likely know he's untrustworthy 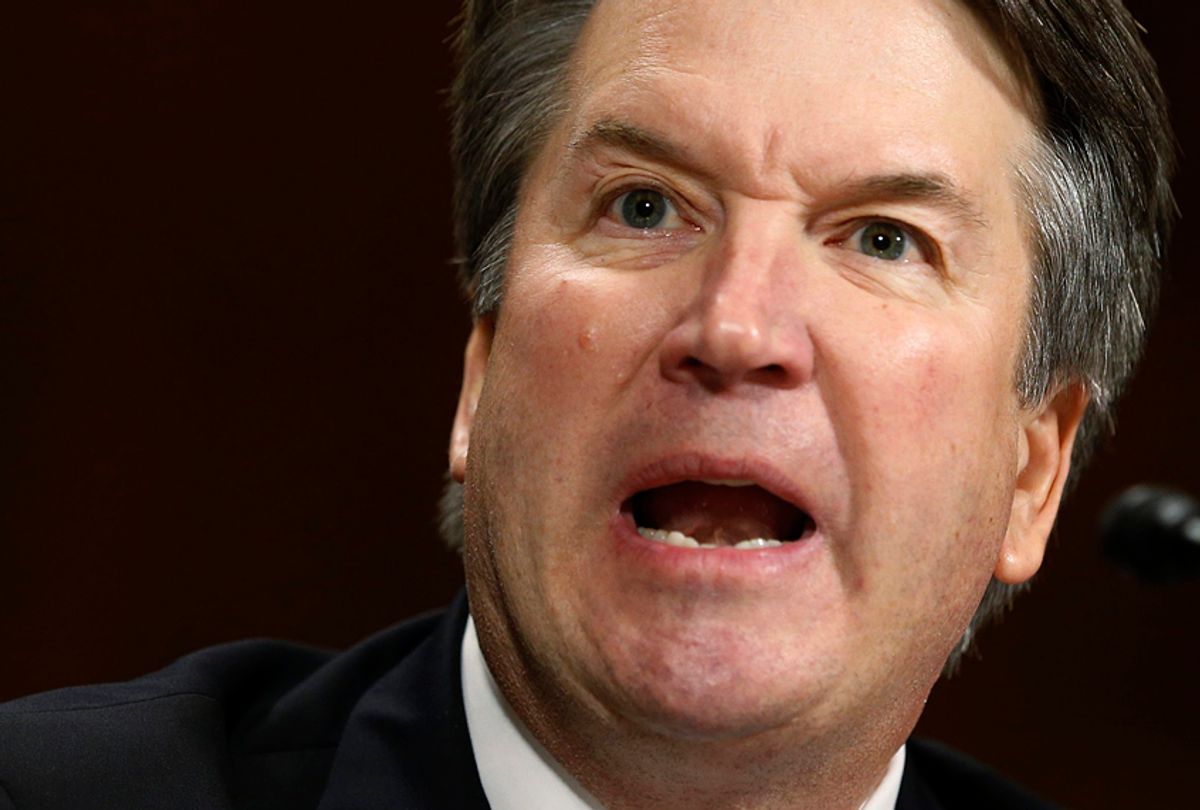 Dr. Christine Blasey Ford gave credible, careful and entirely convincing testimony that Brett Kavanaugh and his friend Mark Judge sexually assaulted and attempted to rape her in the early 1980s when they were all high school students.

Kavanaugh -- who is not a random citizen but a judge on the U.S. Circuit Court for Washington, D.C. -- was full of rage and self-pity. He said he was the victim of a political conspiracy by Democrats, although Ford's supposed role in this conspiracy remained unclear. Kavanaugh is also an obvious right-wing partisan who does not possess the temperament or wisdom to be a Supreme Court justice. His judicial record, writings and other behavior collectively make clear that he is an entitled elite white man who will not even pretend that the law should be blind and fair to all. For Kavanaugh, there is one set of rules and justice for men like himself, and another set for everyone else.

As happens all too often in America, Thursday's hearing showed, again, how the country's rape culture makes women and girls who are victims of sexual assault and other forms of violence into defendants. By comparison, the men who victimize them are depicted as sympathetic and somehow the real aggrieved and wronged parties.

This was literally true for Christine Blasey Ford. She was interrogated by Rachel Mitchell, an Arizona prosecutor who acted as a stand-in for the 11 Republican men who needed to be convinced that Ford was telling the truth. But for these same Republicans it is clear that there is literally no evidence that will ever convince them that Kavanaugh sexually assaulted Ford.

Regardless of what happens with Brett Kavanaugh's Supreme Court nomination, America's rape culture has won again.

At the time of writing, it appears likely Kavanaugh will be confirmed despite Thursday's hearing. But even if Kavanaugh is stopped, he will just be replaced by another judge who comes with the blessing of the Federalist Society and other right-wing groups. Kavanaugh's successor will likely vote to take away women's reproductive freedoms and other human rights, as he will almost surely do. Republicans and the right-wing media will enthusiastically support this new candidate because, compared to Brett Kavanaugh, this person will look like a saint.

Appeals to reason will not persuade Senate Republicans to vote against Brett Kavanaugh. The allure of controlling the Supreme Court for a generation to come, whatever befalls their party in electoral politics, is too strong for most of them to resist. Installing a justice who will very likely protect Donald Trump from Robert Mueller's investigation is an intoxicant as well.

All that remains is a claim on human decency. Thus I pose a question.

Dear Republican senators: Would you trust Brett Kavanaugh alone with your daughter? Or your wife? Or your sister? Or any other woman you loved?

He has been accused of forcible sexual assault and attempted rape by Christine Blasey Ford and at least three other women. This includes the allegation that he participated in gang rapes of drunk and otherwise incapacitated girls and young women while a student at Georgetown Prep in suburban Washington.

While an undergraduate at Yale, Kavanaugh joined both a fraternity and a "secret society" that were notorious for their excessive drinking as well as sexism, misogyny and reported violence against women and girls.

Could such a question such as the one I pose turn Republican voters against Brett Kavanaugh, and in turn force Republican senators to vote against his confirmation? A new poll from NPR, PBS NewsHour and the Marist Institute for Public Opinion suggests that the answer is no: A majority of Republicans (54 percent) responded that Kavanaugh should be confirmed to the high court even if the accusations against him prove to be true.

This is not entirely surprising. Research shows that Republicans and other conservatives lack empathy for those people they consider to be outside their social and political tribe. This includes women, nonwhites, LGBT people and immigrants, as well those individuals they view as "liberals," "Democrats" or "progressives."

The enduring support by Republicans for a nominee accused of multiple sex crimes reflects something else as well. Today's Republicans are extremely tribal and only care about "their team" winning: decency, democracy, freedom and the common good are inconveniences to be trampled upon in the pursuit of total power.

Ultimately, it may be impossible for Republicans and other conservatives to imagine how they would feel if the women they love became victims of crimes like those Brett Kavanaugh and his friends allegedly committed. This is an act of empathy and imagination that the minds of contemporary conservatives cannot comprehend.

This emotional deficit is emblematic of the way today's Republican Party and conservative movement have become an ideological force more similar to a radical religion than a group of people and interest groups participating in "normal" politics. Its members are willing to sacrifice the safety of their own daughters, sisters, and wives if it means securing more power into the indefinite future. This a chilling indictment of America's political culture. No healthy system could have produced such voters, or such leaders.