What we know about Donald Trump's 2020 opponent: Top Democrats evaluate their bench

Salon spoke to Martin O'Malley, John Hickenlooper and Will Marshall about the party's prospects in 2020 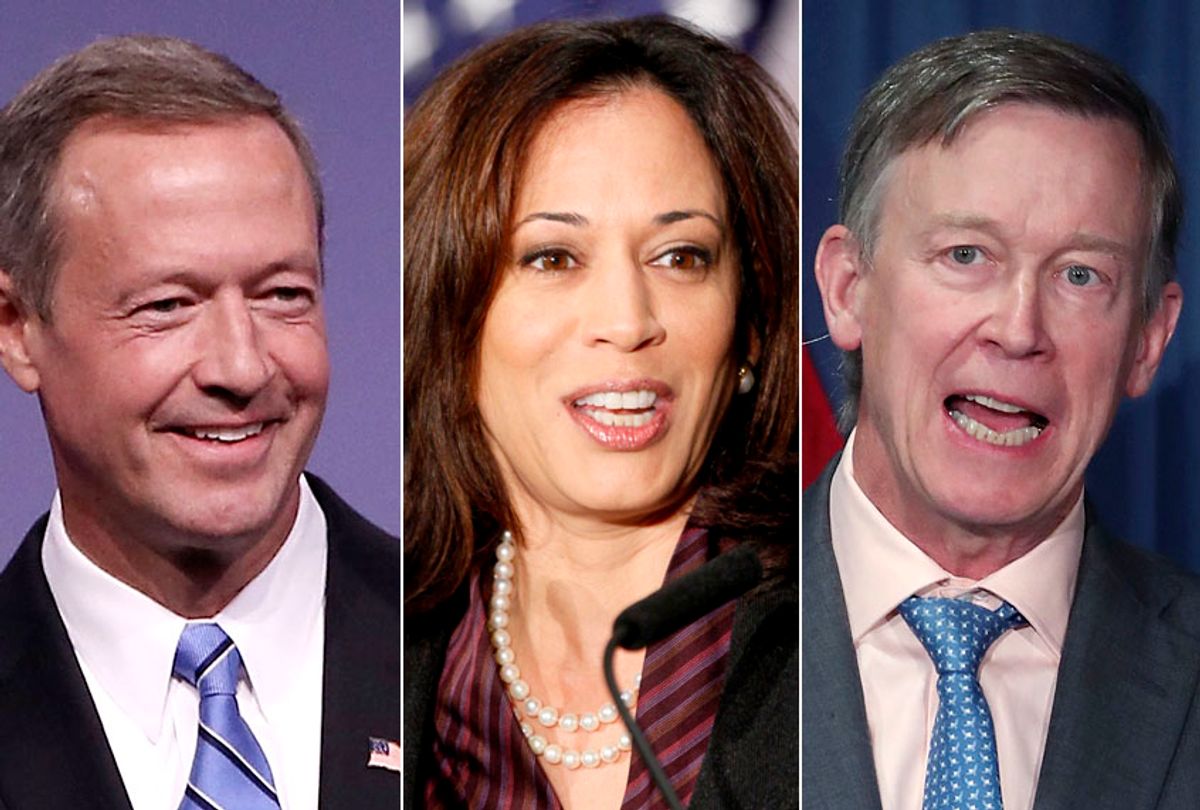 In this photo taken Tuesday, Nov. 30, 2010, California Attorney General Kamala Harris gives her first news conference in Los Angeles. Harris asked a federal appeals court on Tuesday, march 1, 2011, to allow gay marriages to resume while the court considers the constitutionality of the state's voter approved ban on same sex unions. The request came after the California Supreme Court said it needed the rest of the year to consider a legal question the appeals court said it needs answered before it can resolve the case. (AP Photo/Damian Dovarganes) (AP/Getty)
--

Who will the Democrats nominate as their presidential candidate in 2020?

Any woman who throws her hat into the ring will certainly have an advantage, as opinion poll analysis site FiveThirtyEight pointed out in August, "all else being equal, being a woman has been worth an additional 10 percentage points over being a man in the open Democratic primaries we looked at."

Non-politicians who throw their hats into the ring may also have an edge, since Donald Trump's election in 2016 marked the first time that an American was elevated to the presidency without any political or military experience.

In terms of certainties about who the Democrats will field against Trump (or Pence) in 2020, this is pretty much the sum of what we know for sure. Sure, we also know that Sen. Bernie Sanders of Vermont and former Vice President Joe Biden are the frontrunners in the latest polls, but that doesn't mean very much considering that they're also the two candidates with the most name recognition. They also have an age problem: If elected, both men would be in their late 70s when starting office and in their 80s through most of their terms.

Yet does the Democratic Party has an unrecognized star waiting on its bench, someone with the personal charm of a Biden and the inspiring vision of a Sanders? When you take those names and those of the third candidate to consistently do well in national polls, Sen. Elizabeth Warren of Massachusetts (who will also be in her 70s by 2020), off of the list, you are left with a parade of obscurities: Sens. Kamala Harris of California, Kirsten Gillibrand of New York, Cory Booker of New Jersey and Amy Klobuchar of Minnesota; Gov. Steve Bullock of Montana and former Gov. Deval Patrick of Massachusetts; and Los Angeles Mayor Eric Garcetti, to name just a few.

Is there something wrong with the current Democratic field? Considering that polls at this stage usually reflect the eventual choices of the electorate, is it ominous that the only viable options are septuagenarians and that the rest are enigmas to the general public?

I think the real question needs to be this: What should Democratic primary voters be looking for in 2020?

"I think there'll be a premium on people that have some real proven chops when it comes to governance, solving problems, being creative, and tough-minded," Will Marshall, president and founder of the center-left think tank the Progressive Policy Institute, told Salon. "So that's one qualification that I think will be… voters who have it in the back of their minds. But the most important is for an inspiring theory of change, and big change. People are not looking for incrementalism, as Washington plays the game. For the split, the different solutions as the choices are framed in Washington. I think they're looking for outside of the box thinking cliché, but they're looking for something fresh and original and big, big change."

Former Gov. Martin O'Malley of Maryland, a Democrat who remained a third option along with Sanders and Hillary Clinton in the 2016 primaries (and a rumored contender for 2020), expressed a similar thought, at least when it came to focusing on a vision for the future.

"The next successful candidate for president from our party in 2020 needs to be able to articulate and put forward a credible story as to how America wins this third industrial revolution," O'Malley told Salon. "In other words, how we take advantage of the tremendous assets we have in this time of fast change to make sure that our children are winners in this big economic change and not losers. The great fear still gripping our country, even with low unemployment, is that everybody's working harder but we're not getting ahead, and most people are worried that we won't be able to give our kids a better life than we had. And that's we need to address, straight up and head on."

O'Malley also drew from his own experience during the 2016 cycle — particularly being shortchanged during the presidential debates between himself, Clinton and Sanders — to remind the Democratic Party leadership about the importance of giving all of the candidate a voice, so that the voters can have the most thorough possible range of options.

"I think there's a lot of people in our party who are excited by the promise of being able to actually have an open and fair debate and actually being able to evaluate and hear from new voices. So I think at the end of the day, that will be a very good thing for our party," O'Malley explained. "This is an aberrational presidency and it's a very strange time in the evolution of our democracy. What people have beaten over the heads with 24/7 for the last few years is Donald Trump morning, noon and night. So it's understandable that in that atmosphere that these newer voices are not being heard. But I believe in due course that they will be and I hope the party will learn from its mistakes in the past and have more debates and have them frequently so people can see and decide."

Gov. John Hickenlooper, the center-left governor of Colorado and another possible contender for 2020, emphasized that the next Democratic candidate needs to strike a balance between appealing to the left and speaking to Americans whose careers depend on policies that won't alienate the business community.

Hickenlooper also emphasized that the government needs to own up to its past negligence — namely, in not looking out for Americans who have been economically left behind.

"I think that the economy is going to be a big issue for the people, obviously in the midterms but I think also in 2020," Hickenlooper said. "I think we left a lot of people behind. In the 1990s when globalization took place, we outsourced so many of our businesses. Our corporations outsourced so many jobs that whole profession disappeared. People who got laid off, we gave them a little kit on how to write a resume. We told them to make five phone calls a week and they could get their own employment for six months. That was pretty much all we did. That was government malpractice."

One of the biggest flaws of Clinton's 2016 campaign is that, regardless of whether you believe she was treated unfairly, millions of Americans wound up believing that she didn't speak to their concerns. If Democrats are going to pick a successful nominee in 2020, they'll need to focus not just on who that candidate will be, but on how that candidate will communicate a positive vision that can energize their party's base while converting independent voters. That candidate could be a frontrunner like Sanders, Biden and Warren, or it could be a dark horse like O'Malley and Hickenlooper.

Regardless of who is selected, however, the acid test will be presenting the American people with a positive alternative rather than simply being the anti-Trump candidate.