The U.S.-China Trade War: This Is Only the Beginning 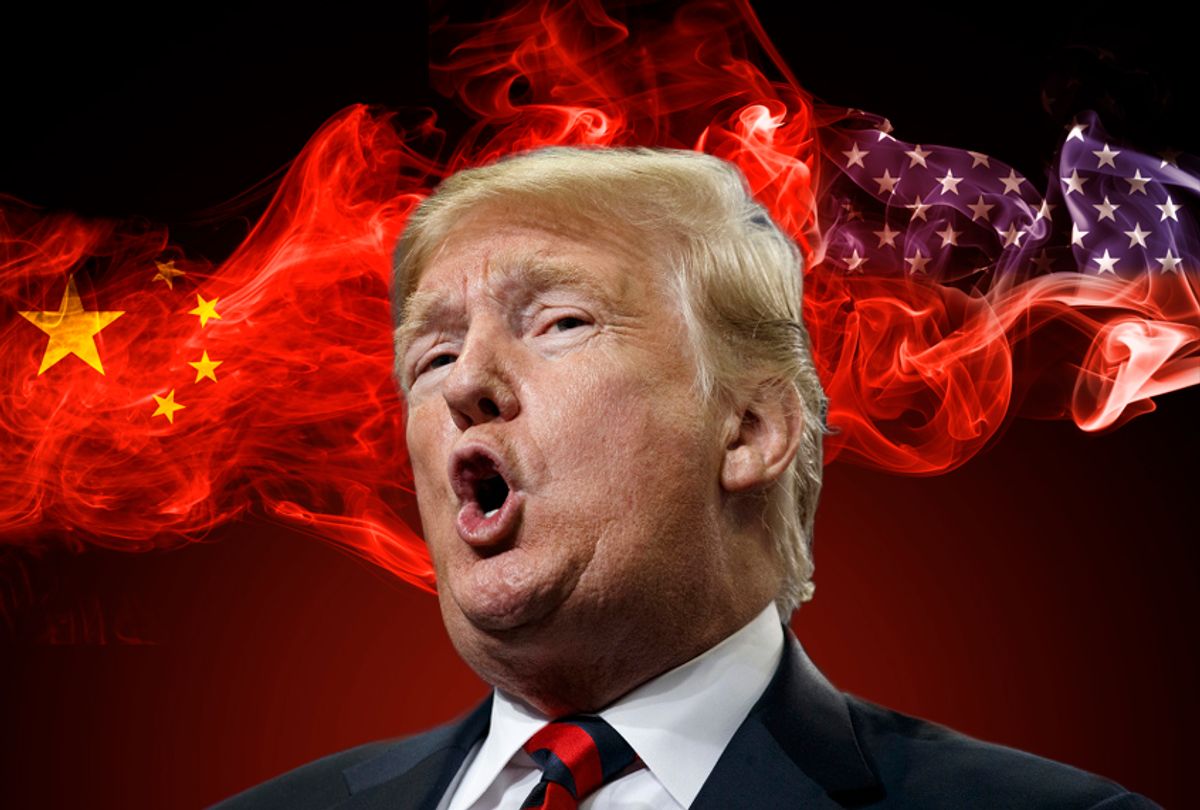 The U.S.-China trade war is heating up in a battle that may last for years to come. Last week President Trump imposed new tariffs on $200 billion of Chinese exports to the United States. The Chinese government responded with tariffs on $60 billion of U.S. goods. The economic effects of this trade war between the world’s two largest economies (the U.S. at $19 trillion and China at $12 trillion) are slowly emerging. While many around the world are ignoring this, the recent damage is only the beginning.

This U.S.-China trade war was primarily caused by confusion. The Chinese government does not understand Donald Trump’s trade goals, because they are not primarily trade goals. Donald Trump has the bit between his teeth. He wants both a victory and public adulation, to feed his ego and to keep a promise to his 2016 voters that he would renegotiate unfair U.S. trade deals. He also fantasizes that he is teaching China who is boss. What's really going on is that China has been gaining ground on the U.S. in key strategic areas, such as military power, economic influence, and scientific accomplishment, and the U.S. is now turning to aggressively confront a new rival.

In 2015, Chinese President Xi Jinping launched a “Made in China 2025” plan, which clearly targets overtaking U.S. industrial dominance in information technology, advanced machinery, aerospace, and new-energy vehicles, coupled with similar deep efforts in quantum computing, artificial intelligence, and biotechnology. This poses an explicit threat to historic U.S. industrial and scientific preeminence, a paramountcy that has undergirded U.S. global influence and military might since World War II.

Similarly, the Chinese government has recently established a military presence on the Mischief Reef near the Philippines, attempting to establish domain over the South China Sea, a domain the U.S.,and the international community refuse to recognize and one the U.S. repeatedly breaches on a point of principle.

President Xi cannot give Trump this public victory, or he too would lose politically at home. This is not about steel or agriculture, rather it is the beginning of overt geostrategic confrontation between two of the world’s most powerful countries, one seeking to gain on the current champion and the other fighting to hold on to its dominance.

Today, Wall Street, Frankfurt and Tokyo, among other stock markets around the globe, appear to be blasé about the trade war. Financial markets in Japan, Germany and South Korea all rose last week. In China, where equity markets fell 20 percent in 2018, Shanghai’s benchmark index climbed about two percent. In the U.S., the Dow Jones index and the S&P 500 index reached new highs last Thursday. But this buoyant Dow/S&P confidence reflects domestic U.S. strength, while passing over the volatile trade context. According to multiple macroeconomic measures, the U.S. economy is running at its highest levels in decades. Unemployment is as low as it has been in nearly twenty years and U.S. corporate earnings increased over 20 percent in the first six months of 2018. In Q2 2018, U.S. GDP growth reached 4.1 percent, only the third time it exceeded four percent growth since 2011. That domestic punch bowl is fueling this U.S. equity markets expansion.

The view among other countries may be that the U.S.-China clash will pass as it currently only involves 2.5 percent of global trade. Even if Trump puts tariffs on every Chinese export, it will only reach 5.2 percent of global trade. They may also see it as a moment of opportunity for them. Tariffs make Chinese goods more expensive to U.S. consumers, so China’s foreign competitors vying for the U.S. market may benefit. For example, in 2017 China exported $147 billion in electrical machinery to the U.S., compared with $62 billion from Mexico. With these tariffs, Mexico could conceivably gobble up market share that the United States is leaving on the table. Conversely, regarding the China market, EU and Japanese manufacturers with no U.S. physical presence could replace U.S. vendors in China selling vehicles, aircraft, and chemicals.

At heart, everyone should be worried. The U.S., China, and all trading nations will feel real economic pain as a result of this trade war. Chinese government officials have already admitted this. The vice chairman of China’s securities regulator, Fang Xinghai, noted that tariffs could reduce China’s annual economic growth by 0.7 percent.

China’s recognition of the serious and lasting nature of this schism is being reflected across multiple channels. Jack Ma, the CEO of the Chinese company Alibaba, the world’s largest retail company and one of the ten most valuable companies on earth until recently, was one of China’s biggest public cheerleaders for U.S.-Chinese business cooperation. When he met Donald Trump on January 9, 2017 at Trump Tower in New York, Ma promised to create one million new jobs in the U.S. by helping U.S. small businesses sell goods in China. Last Wednesday, Jack Ma abandoned the American ship. In an interview with a Chinese newspaper, he indicated that he thought that this current trade dispute would last for 20 years and that he no longer felt committed to creating these jobs in the U.S. He also announced his impending resignation as Alibaba’s CEO. Given Ma’s exceptionally close link to the Chinese government, this is tantamount to an official Chinese broadcast.

Maintaining strong economic growth to sustain high employment among China’s 1.4 billion people is perhaps China’s central policy goal and the Chinese government will adjust because they must. They will deploy other domestic stimulus efforts, such as easing recently-tightened banking restrictions and perhaps undertaking more domestic infrastructure and other investment programs.

This is not without sacrifice and has, in a rare event, forced China to adjust its domestic policies because of a foreign power. A key internal goal of President Xi is to deleverage the Chinese economy to avoid a financial crash similar to that in the U.S. in 2007-08. The current trade war has already forced him to retreat from that aim and allow banks and other economic engines of growth to continue on an aggressive path that will sustain high employment. Xi cannot afford to appear weak at home, particularly at the hands of America, so this makes China stepping back from the fray unlikely.

This clash of economic titans threatens all multilateral trade norms and would replace them with rising tariff and non-tariff barriers around the world, placing pressure on multiple economies and eliminating any winners from this process. More concerning, this trade volatility is triggering a run by global investors into dollar assets, increasing pressures on countries with unstable currencies that were already worried about inflation and depreciation.

The conflict with China is also hurting America at home. As a result of this tariff battle, Wal-Mart stated that prices would go up for U.S. consumers and businesses. At least 11 million U.S. jobs are threatened by China’s tariffs.

U.S. agriculture has perhaps been hit the hardest by China’s tariffs, with American soybean prices falling to their lowest levels in a decade. Rather than negotiating with China, the Trump Administration authorized the U.S. Department of Agriculture to pay up to $12 billion to these affected farmers, in the form of subsidy payments to producers of certain commodities (soybeans, corn, cotton, dairy, hog, grain, sorghum and wheat) and also outright purchases. Because farmers are among Trump’s political constituency and according to the Brookings Institution’s Mark Muro, people who live in rural and low-population counties are deeply vulnerable to such global economic upheavals, Trump and the Republican Party are keen to ameliorate their suffering.

Even though the U.S. is being harmed, there is no chance Trump will back down. He feels that he alone can change the global trade order, make the U.S.-China trade relationship fair, and, most importantly, he wants a personal win. This position is reinforced by several of Trump’s officials and even some outside forces, for very different reasons.

For example, U.S. Trade Representative, Robert Lighthizer, also wants a win, but a strategic one. Lighthizer is more focused on fighting over the treatment of key future industries (such as artificial intelligence, electric vehicles, software, and technology) than agriculture, cars, and steel. He is attempting to use this confrontation to protect advanced U.S. firms and intellectual property in the future, rather than roll back the industrial clock.

It is unlikely that the U.S. will change its negotiating position in the future. Even if the Democrats take control over the House of Representatives after November’s midterm elections, as they are forecasted to with an 80 percent probability, they are more likely to support this aggressive posture against China than Republicans, the traditional party of free trade. Democrats have conventionally distrusted modern multilateral trade treaties, fearing that labor, civil rights, and environmental issues would be curtailed in favor of corporate growth concerns. Key Democratic Party figures such as Senator Sherrod Brown (D-OH) fiercely opposes Chinese trade practices in the U.S., stating that “China is persistent when it comes to cheating the [trade] system.”

In previous trade tiffs with America, the Chinese relied on the U.S. assuming a traditional position of free trade and multilateralism, which culminated in sending contentious cases to the World Trade Organization. That worked well for China for the last 20 years, but that was a different time.

Current U.S.-China trade negotiations or other well-meaning proposals will not end this cycle of tariff retaliation because both countries are asserting relative dominance through economic competition. Donald Trump will continue to belligerently pursue a longtime U.S. goal, to pressure China to follow the international rules (and the international pecking order) the U.S. established over seventy years ago. China clearly has other plans for the 21st century. And neither side wants to back down, leaving no clear path to resolution.