Hundreds of migrant children moved in the middle of the night to desert tent city: report

About 1600 children have been relocated to the unregulated tent city, where schooling is not offered 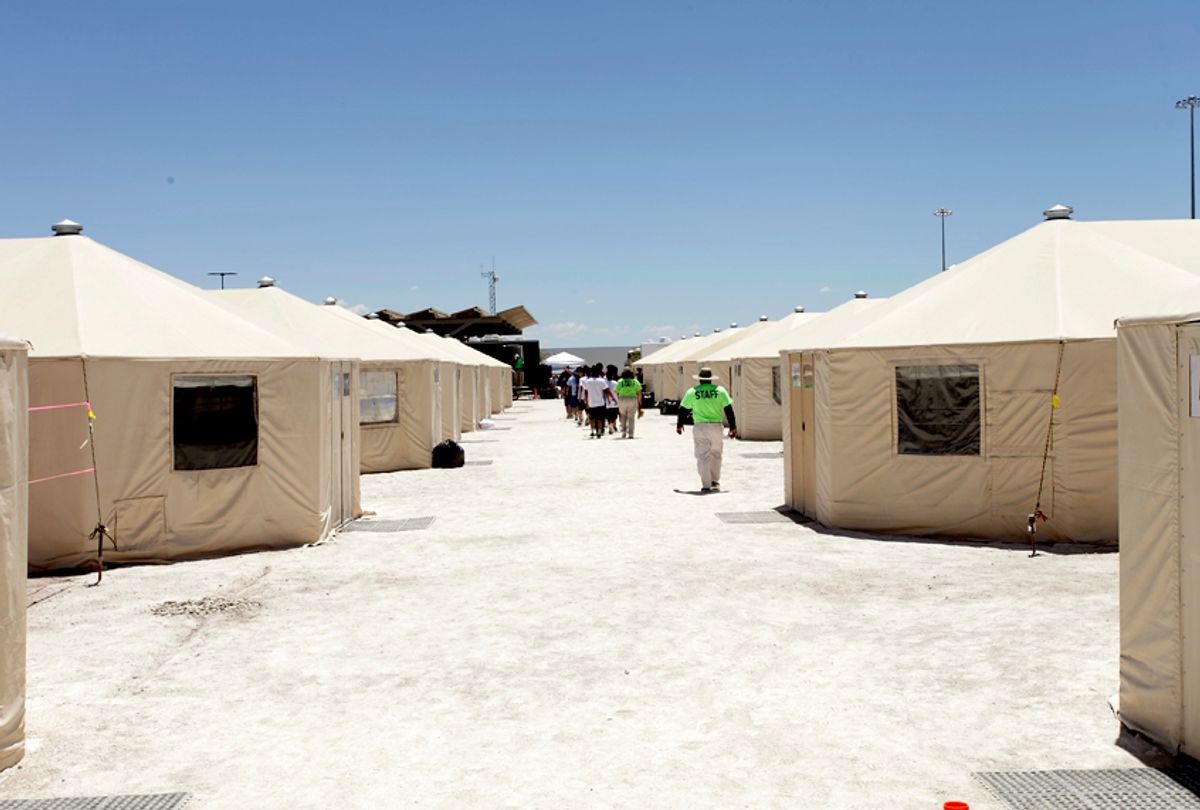 Hundreds of detained migrant children have been moved in the middle of the night in recent weeks, from regulated shelters to a tent city in West Texas, where the conditions are far worse.

Children who had been held in private foster homes or shelters all over the country — where they shared a room with likely just a couple of other kids, had formal schooling, and received regular visits from legal representatives — have been forced to embark on this cross-country journey, often times without warning.

"In the rows of sand-colored tents in Tornillo, Tex., children in groups of 20, separated by gender, sleep lined up in bunks," the New York Times reported. "There is no school: The children are given workbooks that they have no obligation to complete. Access to legal services is limited."

It was reported last month that to accommodate the growing population of detained migrant children, the Department of Health and Human Services will redirect millions of dollars in funding from cancer research, HIV/AIDS care, Head Start and refugee support programs.

But the number of migrant children detained has not just ballooned to unprecedented heights, but a child's average stay in government custody has doubled as well. Shelter populations have neared capacity since May, and more than 1,600 migrant children have been reshuffled from shelters to Tornillo thus far, according to the Times.

"The camp in Tornillo operates like a small, pop-up city, about 35 miles southeast of El Paso on the Mexico border, complete with portable toilets. Air-conditioned tents that vary in size are used for housing, recreation and medical care," the Times reported. "Originally opened in June for 30 days with a capacity of 400, it expanded in September to be able to house 3,800, and is now expected to remain open at least through the end of the year."

There had been approximately 100 shelters where migrant children were housed that are licensed and monitored by state child welfare authorities, but the Tornillo tent city is unregulated and follows guidelines from Health and Human Services, according to the Times, and schooling is not a requirement.

Shelter workers told the Times that it's become a standard operating procedure to move children at night and without much warning, to avoid the possibility of children trying to run away.

The Department of Health and Human Services, which oversees care for the detained migrant children, continues to blame the U.S.'s "broken" immigration system for this growing (and what some perceive as inadequately-cared-for) population.

"It is common to use influx shelters as done on military bases in the past, and the intent is to use these temporary facilities only as long as needed," a spokeswoman for the Health and Human Services Department, told the Times. "The number of families and unaccompanied alien children apprehended are a symptom of the larger problem, namely a broken immigration system. . . Their ages and the hazardous journey they take make unaccompanied alien children vulnerable to human trafficking, exploitation and abuse. That is why H.H.S. joins the president in calling on Congress to reform this broken system."

READ MORE: Many foster kids were drugged without oversight

However, unlike the administration's and the Department of Health and Human Services' reasoning, the rate of minors entering the country illegally has not swelled. "This is not a story about a historically large surge in arrivals," Mark Greenberg, who led the Department of Health and Human Services’ Administration for Children and Families under President Barack Obama, told Yahoo. "The story is fundamentally about a significant slowdown in children being released from care."

Children categorized as "unaccompanied minors," either because they crossed the border alone or were separated from their parents, are held in federal custody until they can be placed with sponsors, who are typically relatives or family friends, and until the child's immigration case is settled in court. But the release of migrant children with sponsors has slowed dramatically, as the Trump administration implemented a change in the process in June, which now requires potential sponsors and other adults living in the household to submit fingerprints. That data is then shared with immigration authorities.

Sponsors are often undocumented themselves, and this new process means coming forward to claim a child, puts would-be sponsors at risk of deportation. The policy, in general, slows the process down for any sponsors, as even documented caregivers still have to wait to be fingerprinted and reviewed.

The modification by the Department of Homeland Securities makes clear that the goal is to determine a sponsor's citizenship or immigration status, and ICE has moved forward with arrests. "Last week, Matthew Albence, a senior official with Immigration and Customs Enforcement, testified before Congress that the agency had arrested dozens of people who applied to sponsor unaccompanied minors," according to the Times. "The agency later confirmed that 70 percent of those arrested did not have prior criminal records."

Migrant children are more at risk for myriad psychologically problems when it comes to extended stays in any shelters, but in an expansive facility like Tornillo, those risks are only bound to increase.