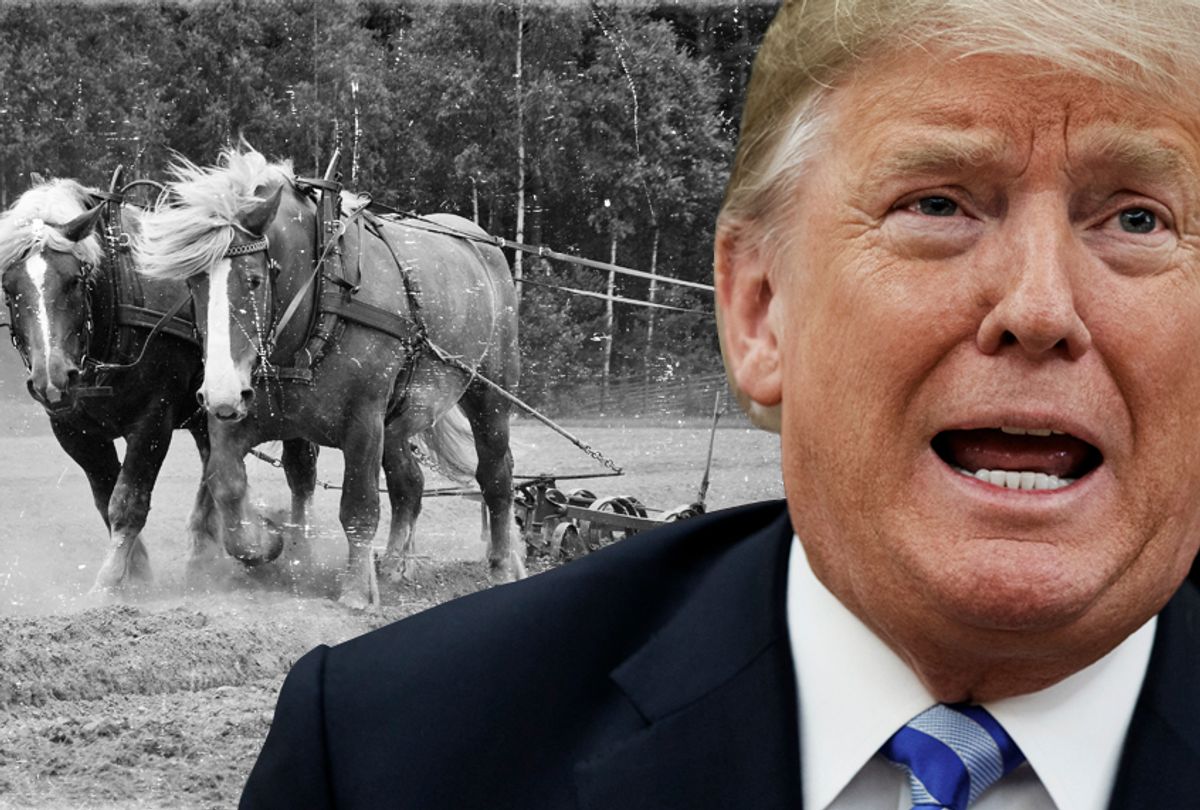 Sadly, the use of tariffs to protect American workers facing abrupt technological change is not new. If history tells us anything, tariffs are a political placebo applied without concern to the consequences. It's a depressing story that doesn't end well.

The tariffs President Trump is enacting now are an echo of those imposed after the mass production of automobiles disrupted the existing American transportation industry in the first half of the 1920s — horses.

Up until then horse power drove American transportation and a huge agricultural industry grew up around horses. Once horses were replaced by cars, the market for oats and horse feed was devastated, and with it, much of the American farm economy. It was the equivalent today of the demand for gasoline suddenly disappearing; gas stations would shutter and the petroleum industry would shrink.

At least 21 million acres of cropland and pastures previously devoted to feeding horses switched over to agricultural products for human consumption and that had serious consequences, reported the U.S. Department of Commerce in its 1930 Census of Agriculture/ The Farm Horse. Huge crop surpluses sent crop prices and farm incomes plummeting, according to the federal report.

The dominoes continued falling. Farmers defaulted on bank loans and by the late 1920s, approximately 18 percent of American farms were in foreclosure.  Farmers and their government representatives sought relief through increased tariffs to keep out foreign imports out of the U.S. — much the way tariffs today are sought to protect American coal and steel.

And similar to today, when automation rather than imports trigger most job losses, imports posed little competition for most American farmers in the 1920s. In fact, the opposite was true; exports accounted for 15 to 17 percent of farm income in 1926-29.

In his 1928 presidential campaign,  Herbert Hoover came to the rescue, or so it seemed to some, calling for increased tariffs on agriculture imports. After winning, Hoover urged Congress to boost the tariffs. New protective taxes did not end there, however.

With agricultural products about to be protected, non-farm states demanded higher tariffs on foreign manufactured products to protect their depression-weakened industries.  By the time the massive Smoot-Hawley Tariff Act became law, 20,000 imported products were affected, and it raised the effective tax rate on more then 3,200 products to 60 percent, quadrupling previous tariff rates on individual items.

Smoot-Hawley’s disastrous impact was immediate.  The European press instantly went on the attack. In France, Smoot-Hawley was compared to a declaration of war, an economic blockade.  In Sweden, it was labeled "the most terrible blow against the economic life of the world," and in England it was compared to the German attack of 1914.

Politically, there was nothing these countries could do to appease their own constituents’ anger but double down and raise tariffs against The United States. American autos were an easy target for retaliation; U.S. cars made up 54 percent of world trade in motor vehicles. In fact, anticipating this reaction, Henry Ford had pleaded with Herbert Hoover not to sign Smoot-Hawley into law.

In the category of “be careful what you wish for,” American farms saw exports drop a third by 1933 under the wave of tariffs.  Retaliation against U.S. cotton was immediate. Three days after Smoot-Hawley went into effective, Great Britain prohibited the importation of certain grades of raw apples and Argentina imposed restrictions on the importation of American eggs. The decline in United States agricultural exports made a troubled farm economy much worse.

Economists differ whether the Smoot-Hawley Tariff Act of 1930 was one of the main drivers of the Great Depression, or was responsible as a significant accessory to the crime, fueling what had already been an economic slowdown.

But one thing is clear, use of the blame-the-outsider tariff game to shelter a few industries against the inevitability of technological change is a pursuit that ends in economic disaster.