Welcome to bee season! Women are furious, but you knew that already 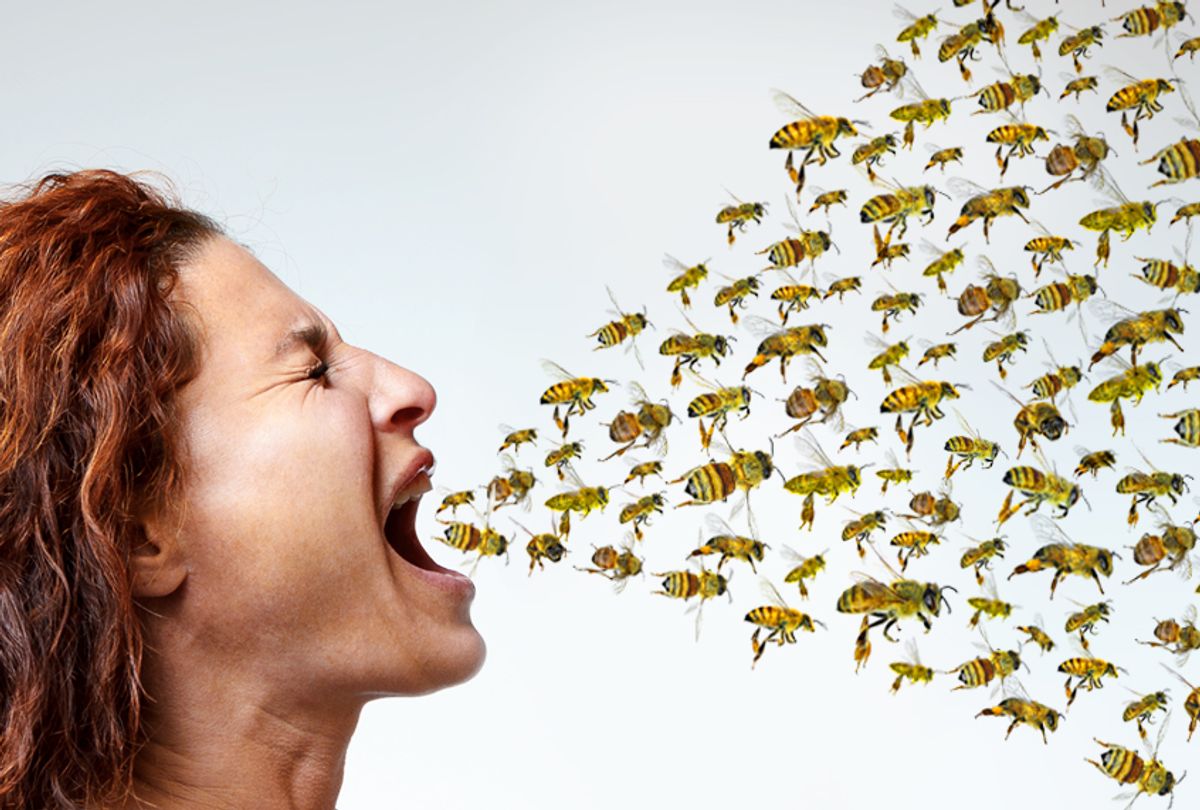 Back in June — which feels like five years ago, not three months — I went out for drinks after work with an old friend and a new friend and came home more convinced than ever that every woman I had ever known and would ever meet was, at that moment, carrying around enough anger to power a mid-sized country like France, if harnessed with the right futuristic technology.

We didn’t make the date with anger on our minds — this was strictly a mutual friend set-up for fun and perhaps groundwork for future creative collaborations — but the week had gone sideways a few different ways that reminded each of us of the ways which we had been silenced, ignored or jostled to the sideline as a matter of routine life in these United States in the 21st century. Once the fury dam was breached over mole nachos, the sense of mutual recognition was overwhelming.

I'm used to experiencing collective anger against injustice in political spaces, both digital and physical, but lately I've noticed more and more of my personal spaces — and not just caustic group texts — have started to turn that way, too: Even the most innocuous outing can turn on a dime to dark mutterings about the grinding bastards in Washington, in the state capital, in the boardrooms and green rooms and meeting spaces of daily life. And that last part is significant: I don't believe this anger's roots are only as deep as the election of 2016, nor do I believe they grow from a strictly partisan place. (I think often of the anecdote told to me by author Elizabeth Wallace over the summer about making a $1,000 bet with another woman that they wouldn't see one father walk into their kids' school's anti-bullying workshop, and of course she kept her money. That's not a Democrat vs. Republican issue; that's just a reality.)

It's not only about rape and sexual assault, though it is about that. It's not only sexual harassment and sexism in the workplace, compounded exponentially by racism for women of color, though it is about that too. It's not just about health care access for women, and within that not just about abortion and birth control, but also the alarming rates of maternal mortality for black women and the poisoned water in Flint, Michigan.

It's about moments as specific as the hypocrisy of penalizing Serena Williams for expressing herself as openly as a white man can on the court, a moment that registered and resonated far beyond tennis fans, and as generally horrifying as migrant children being separated from their parents at the border. Most importantly, it's not just individual anger we're all carrying. This is what empathy does: It aggregates our anger, making us furious not only on our own behalf but on behalf of each other's fury.

This experience wasn’t just women being “emotional,” as we have long been accused of being, despite the overwhelming number of ranting and sniveling and pettily aggrieved men we’ve seen step in front of us at the podium, in front of the cameras, in recent years. Rather, the sensation of keeping anger inside us, away from the world that would judge us “crazy” for allowing its full expression, takes as much of a physical form as stress does. (Anyone else grinding their teeth lately?)

I went home and wrote a sentence that I felt summed up my little epiphany, mostly to amuse my friends — my only objective on Twitter for the last decade, to be honest — and went to bed. "Every woman I know has been storing anger for years in her body," I wrote, "and it's starting to feel like bees are going to pour out of all of our mouths at the same time."

I woke up the next day and saw the likes and retweets had been racking up overnight. The tweet continued to spread over the next few days, capping out at around 64,000 likes by the end of that week. This isn't a crazy number, of course; it's roughly the equivalent of Chrissy Teigen's best post of the day. But I didn't realize how widespread the feeling was; that so many of us were walking around with decades of swallowed anger curdling in our stomachs, with a "THIS" as our socially acceptable recourse. Release the bees! we joked, with Oprah gifs.

Women's anger is a hot topic right now. Soraya Chemaly's book "Rage Becomes Her" came out last month, and Rebecca Traister's "Good and Mad" drops tomorrow. (You can watch Traister live in conversation on "Salon Talks" with Salon's Amanda Marcotte on Tuesday, Oct. 2, at 4 p.m. Eastern, by subscribing to SalonTV’s YouTube Channel.) None of this is new exactly.

If in June the swarm felt anticipatory, the emphasis landing harder on the “storing anger in our bodies,” when the tweet started making the rounds again last week during Christine Blasey Ford’s very deliberately not angry-sounding testimony at Brett Kavanaugh’s Supreme Court confirmation hearing, followed by Kavanaugh’s grotesque spectacle of petulance and self-righteous defense, the burn began to creep up our collective throats. To use a woman's scale of pain, it felt not unlike getting a migraine on the same day as an IUD insertion. Rather than curling up inward to deal silently, though, we started thrumming audibly in unison. When we watched Ana Maria Archila and Maria Gallagher confront Sen. Jeff Flake, as he tried to flee on an elevator — "Look at me when I'm talking to you" — and hear what they had to say about Kavanaugh as sexual assault survivors, it felt like bee season might now be upon us.

A funny thing happened then. I started seeing screenshots of the tweet being shared by strangers on Facebook and Instagram, which I would only become aware of when mutual friends or followers would tag me in the post. There’s a reason I wrote the initial post for Twitter, where anger is lingua franca. Instagram is for prettily lit cocktails and funny pictures of my dog. Once the bees breached Instagram, heretofore the land of cute babies and red carpets, to say nothing of Facebook — now a never-ending memorial service with the occasional interruption for a birthday party invitation — it felt like another corner had been turned. Women's anger might not only be normalized, but its power might even be celebrated — or better yet, feared.

Over the weekend, the following message also made the rounds on Facebook: "Tomorrow, female blackout from 8:00 a.m. to 9:00 p.m. Its a movement to show what the world might be like without women. Your profile photo should just be a black square so that men wonder where the women are. Pass it only to women ... It's for a project against domestic abuse. It is no joke. Share it."

I saw one, maybe two blackout profile photos. But mostly I saw posts from women across all social channels explaining respectfully — because, women — why they refused to black themselves out, to "show what the world might be like without women." They are tired of being quiet in the hope that their silence would make men finally listen.