Democrats, don't get complacent about the "blue wave": Have we learned nothing from 2016?

Steve Bannon called them the "hammerheads," and they saved Trump's bacon last time. It could happen again 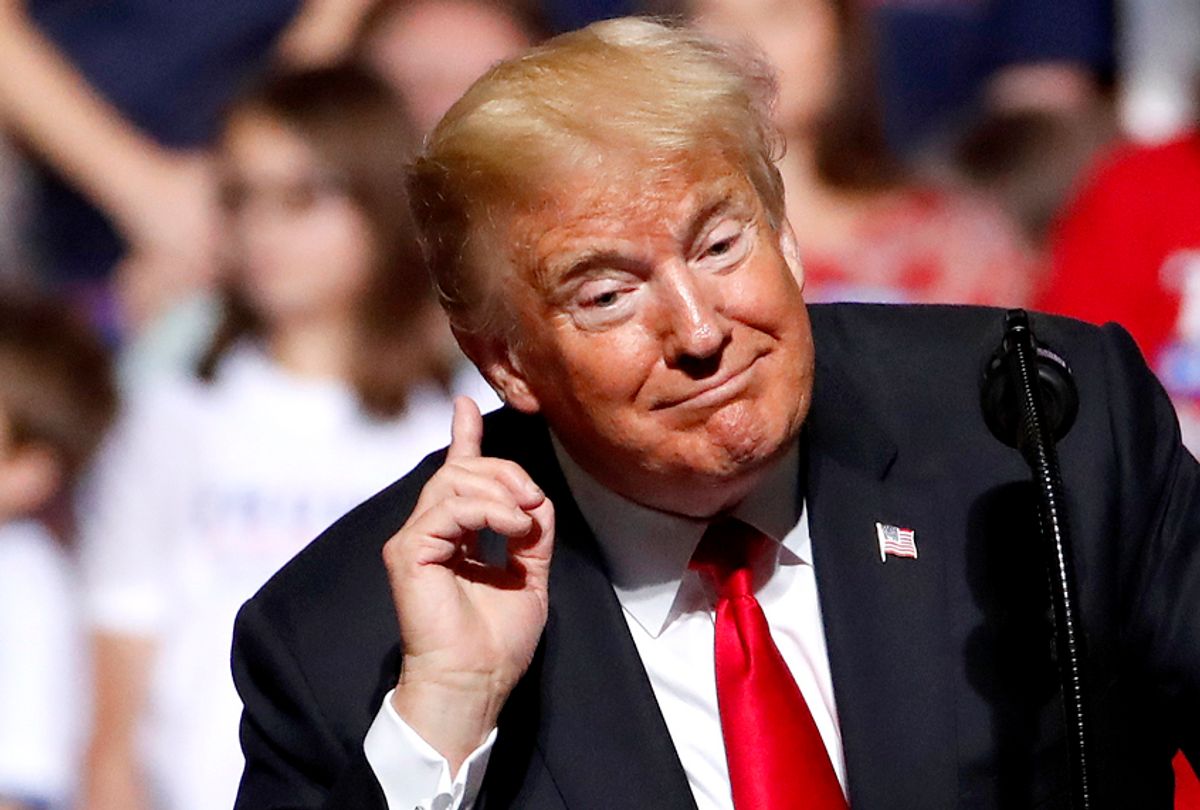 The lack of self-awareness among Donald Trump’s Red Hat army is staggering. The other night, Trump held another one of his codependent rants in West Virginia, during which the president scolded the “Democrat Party” (pro tip: there is no such thing) for being “angry and mean and nasty and untruthful.” He went on to add, “They’re willing to overthrow every standard of decency, justice, fairness and due process to get their way.”

If you feel like you just swallowed all the crazy pills, you’re not alone.

The irony shouldn’t have to be explained. All those adjectives serve perfectly to define Trump and his “f**k your feelings” loyalists. It’s Trump who’s actively destroying the higher standards the founders established for the presidency -- standards that previous chief executives of both parties have upheld.

Indeed, seconds before he co-opted the Normals’ criticisms of his character and leadership, projecting the criticisms back at his critics in “I know you are but what am I?” mode, Trump once again mocked the notion of being presidential. He followed that by mocking one of the most senior U.S. senators, Dianne Feinstein of California, to the reinforcing boos and jeers of his followers. But somehow it’s the Democrats, not the Trumpers, who are mean and angry and nasty, right? It can’t be that it’s the president setting the tone and then whining (“So unfair!”) whenever we respond accordingly. Have the Red Hats ever actually watched a rally on television? Do they know?

Like it or not, we’re in the post-contradiction, post-hypocrisy age of Trumpism when both prior and future remarks are irrelevant in the face of the eternal now. Here, Trump can blurt whatever the hell he wants and his supporters don’t care whether he contradicts himself. It’s not unlike a few weeks ago when Trump and his son Donald Jr. mocked Obama for the “57 states” remark, circa a decade ago, even though Trump frequently needs multiple tries to correctly spell words. Many words. (How’s the covfefe?) He also has trouble with water, such as when he announced water is wet. Besides, Obama was referring to states and territories, which also hold presidential primaries. But of course none of that matters -- the Red Hats don’t care if Trump commits a dozen ridiculous gaffes before most of us roll out of bed every day.

It’s this blind fealty that continues to yank the president out of scandal after scandal, the ones he himself inadvertently manufactures as a consequence of his manifest lack of fitness for the office.

In Bob Woodward’s breathtaking new book, “Fear: Trump In The White House,” Steve Bannon is quoted referring to Trump’s rally Red Hats as “the hammerheads.” Even in the first few Woodward chapters, it becomes abundantly clear how the easily-led ferocity of Trump’s hammerhead base is what carried the his campaign through a dismal August of 2016, in which the bad news for Trump was relentless.

Trump’s loyal fanboys also carried a candidate who was flailing in the polls, providing him with the energy to power through the “Access Hollywood” sexual assault crisis, when everyone from the Republican National Committee to Chris Christie -- possibly including Mike Pence -- were preparing for Trump to drop out. (We were so tantalizingly close to all of this ending before it really started.) Instead, the norm-defying candidate survived the news cycle and, despite horrendous and highly plausible charges against him, went on to a miraculous and improbable election victory with the help of his Red Hats, many of them brainwashed by a daily infusion of Fox News and Russian propaganda.

Of course, just about the entire message from Trump and his co-conspirators was nonsense, force-fed like hatchling birds into the gullets of the hammerheads. If it wasn’t for Trump’s artificial populism, his political aspirations would have crashed and burned three years ago.

Trump’s career is marked by a lengthy series of timely bailouts, allowing the alleged real estate billionaire to wiggle out of tight spots over and over again. His family wealth, a few bankruptcy scams and, yeah, Russian oligarchs have bailed out his finances. NBC bailed out his tabloid popularity with “The Apprentice.” Today, executive powers are shielding him from full accountability for his numerous crimes. His toxic relationship with both the press and the Red Hats helped him overcome numerous campaign scandals and now presidential scandals that would have doomed anyone else at his level.

Angry populism, the brand of politics being exploited by Trump, is the easiest and most expedient approach to building a following. Appealing to the lizard-brains of cynical voters doesn’t require much by way of knowledge, thoughtfulness or nuance. Details are irrelevant when you’re telling the mob exactly what they want to hear.

The great irony of Trump’s Red Hats is this: Their leader is actively deceiving them, exploiting their miseducation, naiveté and anger using a brand of carny showmanship New Yorkers have witnessed up close for the last 30-plus years. By the way, it’s not as if Trump descended the escalator at Trump Tower after materializing from another universe. He has a history. The Red Hats only need to chat for a few minutes with anyone who’s followed Trump’s well-documented real estate career to know he’s a professional con-man. Either they don’t know or they don’t care. Each option, ignorance or cynicism, is just as awful as the other.

Woodward’s book describes Trump’s followers as a movement. If so, it’s a movement based on recklessness, deception and grievances -- human traits that even the best layout of the facts won’t contravene. Those factors have kept Trump’s approval poll numbers hovering in the 40s, even while stories from inside the White House describe him as incompetent, dangerous and dumber than rocks.

As we look ahead to next month’s midterms, we’d do well never to underestimate the ferocity of Trump’s supporters. Even though polls continue to forecast good news for Democrats and, with them, a democracy-resuscitating check on Trump’s extra-constitutional abuse of power, I’m not entirely comfortable predicting a blue wave … yet. The polls and the general atmosphere on the ground are still too close for comfort given Trump’s legal and political peril, and especially the unwavering loyalty of his disciples despite it all. We’ve been here before. Don’t get happy.