Most plastic is tossed after minutes of use, but its impact on wildlife and the environment can last for centuries 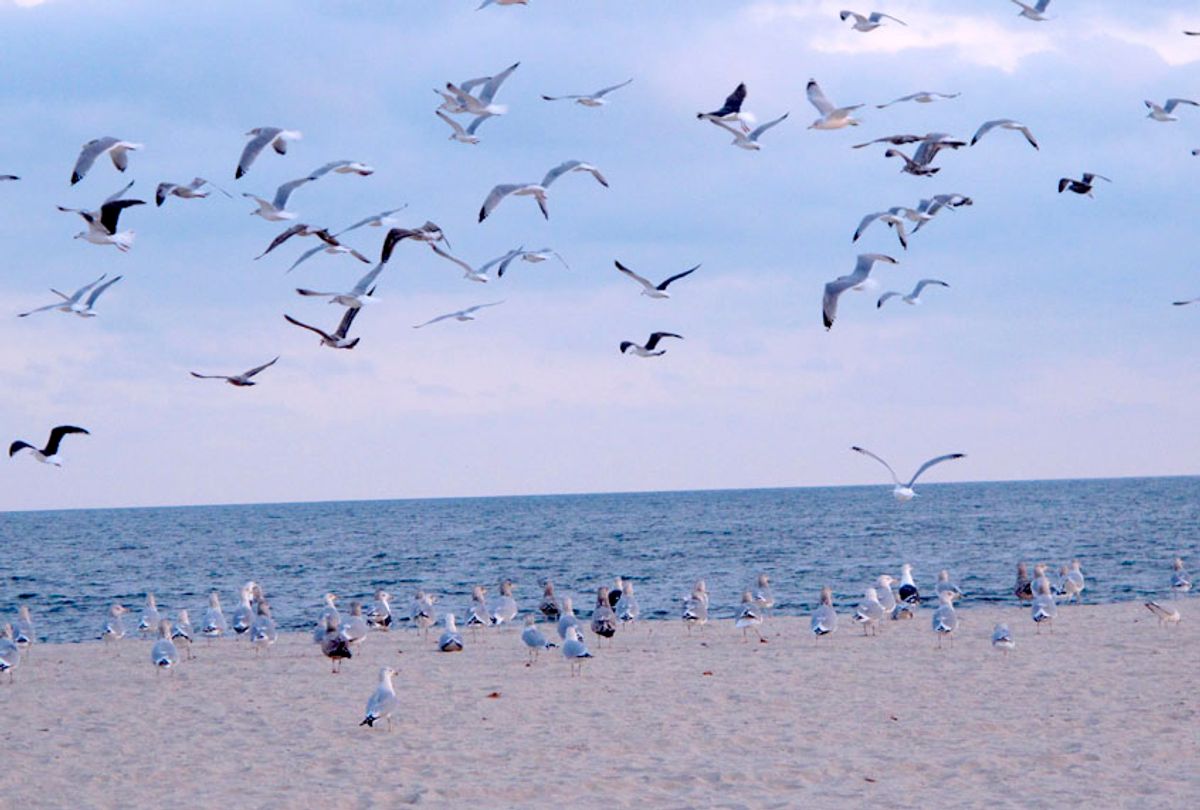 This article was produced by Earth | Food | Life, a project of the Independent Media Institute, and originally published by Truthout. Reprinted with permission.

The world’s plastic problem may seem vast and incalculable, but its footprint has actually been measured. In a sweeping 2015 study, researchers calculated that 9 billion tons of the material have been made, distributed and disposed in fewer than 70 years. That’s an astonishing figure, but it’s also one that’s hard to picture. Perhaps a better way to illustrate the problem of plastics is by looking at the damage that can be caused by a single drinking straw.

In 2015, a team of marine biologists in Costa Rica pried a plastic straw from the nose of a male olive ridley sea turtle. Footage of the excruciating, bloody extraction was posted online and viewed by millions of people around the globe. The video is powerful not only because it suggests the pervasiveness of plastics and shows the harm it can inflict on a vulnerable species, but it also strikes a much deeper chord within: shame.

“Subconsciously, people who watched the video knew that the straw in that turtle’s nose could have been thrown away by any of us,” Christine Figgener, the biologist who extracted the straw, wrote in a Medium post after the video went viral. “They saw their own actions reflected in its eyes.”

Not long after saving that turtle, members of the same team of marine biologists in Costa Rica pulled a plastic fork out of the nose of another olive ridley, this time a female. A video of that disturbingly similar extraction was also posted online and viewed millions of times.

After that video came out, I spoke with George Shillinger, the head of the Monterey, California-based conservation nonprofit called the Leatherback Trust, which works with the team in Costa Rica.

“It’s just the tip of the iceberg,” he told me. “This was an isolated incident involving a single turtle in a small area off a nesting beach in Costa Rica. Just imagine globally what’s happening.”

In 2015, a study by Australian and British scientists determined that 90 percent of seabirds living today have ingested some form of plastic, mistaking it for food. If plastic consumption continues at its current rate, 99 percent of seabirds will carry plastic in their guts by 2050.

Then can we assume, I asked Shillinger, that the same thing is happening to sea turtles? He replied without hesitation: “Totally.”

Both turtles were released back to sea after the items were freed from their nostrils, but other aquatic creatures are not so lucky. In June 2018, a small male pilot whale that died in southern Thailand was found with more than 80 plastic bags crumpled in his stomach. The veterinary surgeon who carried out the necropsy told Sky News the animal was “emaciated,” as the plastic likely stopped the whale from getting the nutrients he needed.

This is the key to understanding that aforementioned 9 billion ton figure, which was calculated by researchers from the University of California, Santa Barbara, the University of Georgia and the Sea Education Association: Most of that plastic — roughly 7 billion tons — has been thrown away. Only 9 percent is recycled and 12 percent is incinerated, leaving the vast majority of plastic waste accumulating in landfills or in the natural environment, the researchers determined. If you think one plastic straw is bad, think what 7 billion tons could do.

The most eye-opening revelation in the research is how quickly plastics proliferated since the 1950s, when mass production of synthetic plastics first took off. Half of the world’s plastic now in existence was made in just the last 13 years, with most of that for products used only once, discarded and forgotten.

If you think back to that first turtle, his encounter with a plastic straw is a distinctly modern problem. Paper straws were the standard until their non-degradable cousins took over in the 1960s and ’70s. Today, about 175 millionplastic straws are thrown out in the United States every day, the marketing analysis firm Technomics estimates.

There’s no denying the incredible usefulness and versatility of plastic. The low-cost, durable material can be molded into everything from lightweight drinking tubes to insulation for our homes. We take for granted that plastic keeps our food fresh and encases the electronics we use everyday. Modern medicine would not be possible without disposable syringes and plastic implants. However, its durability and widespread use around the globe are exactly why plastics are so pervasive in the environment.

Recycling is often promoted as a green ideal, but the small amount of plastics that do get recycled are mostly downcycled to a lower-grade material to make even more landfill-bound products such as synthetic fiber for clothing and carpets or takeaway food containers. Recycling also can’t possibly keep up with the expected deluge of new plastics, as fossil fuel companies have plowed $180 billion to fuel a 40 percent rise in plastic production in the next decade.

Incinerating plastic certainly gets rid of it, and some suggest that burning the petroleum-based waste could be a fuel source. However, the processemits harmful dioxins in the atmosphere, potentially creating a public health risk.

That leaves us with the dump, where most plastics end up. Hundreds of millions of tons take up valuable landfill space and mix other types of trash. During rainfall, water trickles through the landfill, creating a toxic, chemically laden stew called leachate. If the landfill is not properly lined, leachate can ooze into nearby groundwater, wetlands, rivers and lakes. Bisphenol A, a ubiquitous, endocrine-disrupting plastic additive also known as BPA, has been detected in landfill leachate at levels exceeding acute toxicity benchmarks, a 2015 study of Norwegian waste-handling facilities found.

Perhaps the biggest problem with plastics is when they escape into waterways. The same team of researchers who came up with the 9 billion ton estimate also put out another famous study in 2015 that found 8 million tons of plastic leach into the world’s oceans every year.

This constant flow of plastic can seriously threaten marine life that accidentally eat or become entangled in the material. The United Nations estimates that more than 800 animal species have been negatively impacted by marine debris, which is mostly plastic.

Take the drinking straw found in the turtle’s nose. How did the straw get there? I imagine that the straw was swept out of a landfill during rainfall. It trickled into a stream, flowed into a river, then was carried out to sea. Pushed along by winds and waves, the straw got drawn into a garbage gyre — one of Earth’s five massive vortices of plastic soup — and floated among millions of other pieces of trash. Then one day, the straw was accidentally eaten by our turtle.

Notably, the most prevalent type of plastic in aquatic ecosystems isn’t easily visible. Bags, bottles, fishing gear and other ocean plastics break down from currents and sunlight into smaller and smaller pieces, or microplastics. These tiny particles, which also consist of microfibers shedding off synthetic fabric during laundry, have been found in all corners of the globe.

A 2015-2017 study analyzed the abundance and distribution of microplastics and microfibers on 37 coastal National Parks and found the particlesin every single one, even the most remote and secluded sites. Parks that were far away from urban areas — including sites in Alaska, along the northwest Pacific coastline and islands in the Pacific Ocean — clocked more than 100 pieces of microplastics per kilogram of sand.

“It doesn’t seem to matter where you live,” said Stefanie Whitmire, research scientist with Clemson University and the study’s lead author. “Plastic is being found in rivers and lakes, not just in the middle of the ocean. Microfibers are found in the sea salt that I just bought from the grocery store.”

Trouble is, scientists have documented all sorts of marine life gobbling up these plastics, including plankton, fish, mussels, oysters and even coral, but it’s not currently clear what influence it has on the organisms’ health.

“It’s such a new area that scientists don’t know everything about how it’s affecting the organism,” Whitmire explained. “But we know that plastics are made up of things that aren’t great,” such as BPA and other chemical additives.

New research from Loggerhead Marinelife Center and the University of Georgia suggests that ingesting degrading ocean plastics poses a risk to younger sea turtles because the pieces can cause blockages and nutritional deficiencies. This not only puts entire sea turtle populations at risk, since they can take decades to sexually mature, but degrading plastics can also impact the larger oceanic food chain, the researchers warned.

“If the level of mortality we have observed in post-hatchling sea turtles also occurs for zoo plankton, baby fish and crustaceans, then we will witness a complete disruption in our ocean life cycle,” co-author Branson W. Ritchie of the University of Georgia explained in a press release for the study.

So what happens when contaminated plastics are ingested by an organism?

“That’s one of the big concerns,” Whitmire said. “Where plastics rank on how they are affecting wildlife, we don’t know that whole story yet.”

What we do know is that the globe’s plastic footprint is only getting larger. The Ocean Conservancy’s 2018 International Coastal Cleanup report found that the 10 most common items picked up by volunteers at beach cleanups around the world were all made of plastic.

It was the first time since the annual report’s inception more than 30 years ago that plastics swept the top spots. Cigarette butts, which have plastic filters, were the most commonly littered item. Food wrappers, drink bottles, bottle caps, bags, drinking straws and foam food containers were also on the list.

A lot of this plastic is tossed after minutes of use, but its impact on wildlife and the environment can last for centuries.

“But this is the first year that all 10 of the top-10 items collected are made of plastic,” he said in an issued statement. “Given that plastic production is rising, this could be the start of a long and troubling trend.”

Although the problem with plastic is usually tied to its risks to waterways and wildlife, an August 2018 study found that commonly used plastics, such as grocery bags and plastic wrap, emit traces of methane and ethylene. The two potent greenhouse gases are known to exacerbate climate change.

“Considering the amounts of plastic washing ashore on our coastlines and the amount of plastic exposed to ambient conditions, our finding provides further evidence that we need to stop plastic production at the source, especially single-use plastic,” lead author Dr. Sarah-Jeanne Royer said in a press release for the study.

Lorraine Chow is a freelance writer and reporter based in South Carolina.