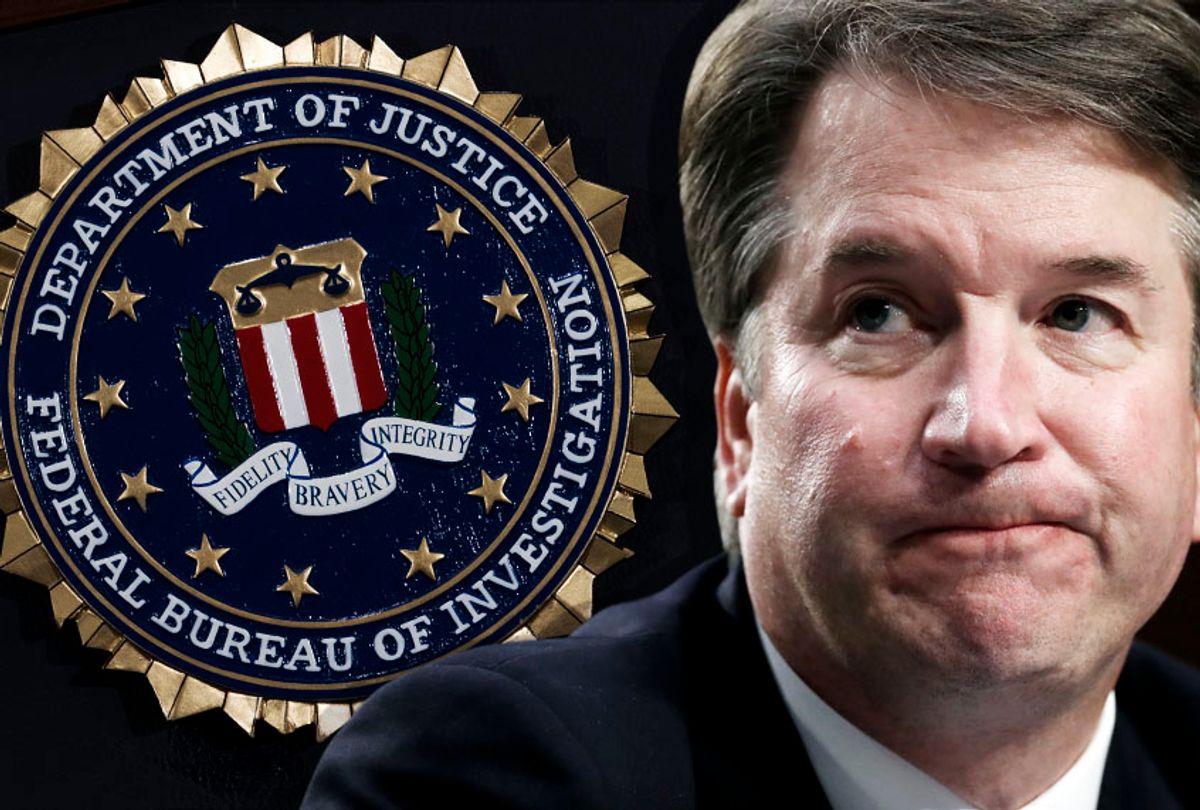 As things are turning out, the only thing worse than having no independent FBI investigation of allegations of sexual misconduct and truth-telling by Judge Brett Kavanaugh may turn out to be actually pursuing a week’s worth of inquiry.

At this early stage, the public squabbling is overtaking the possible outcome of a short inquiry called, as Sen. Jeff Flake (R-Ariz.) to try to bring us together as a country. It turns out that what people mean by an independent look by the FBI is certification of their own pre-ordained conclusions.  And “investigation” and “independent” mean different things, depending on one’s partisan political outlook, as well as our own views about #MeToo and, more generally, of acceptable or non-acceptable behavior.

Look, we left this shared tale last week when both Kavanaugh and Dr. Christine Blasey Ford had testified before the Senate Judiciary Committee that each was 100 percent sure that there had been no party, no sexual assault, or that a drunken, much younger Kavanaugh had thrown an unsuspecting 15-year-old Blasey onto a bed at a party and jumped on top of her. In the words of the senators, it was either an unreported attempted rape or a miscarriage of justice even to raise the 36-year-old incident, depending on which team the speaker was part.

Now that we’re a couple of days into the FBI re-opened background check, the questions about exactly what is under investigation have been ripped open. These include divisive interpretations of what the FBI is or isn’t allowed to pursue, whether any witnesses can be compelled, whether there indeed are any facts to be gathered beyond more he said, she said, or what to do as a result.

Trump, for example, is happily crowing that he is allowing an independent inquiry to roam where it will, while the White House chorus behind him says the FBI can look at Blasey Ford’s allegations, and those of Denise Rivera, a second complainant from a separate incident. After public pushback, the White House relented to allow questions about Julie Swetnick, who charged that Kavanaugh was part of a group of young men who, she said, would regularly spike party drinks to allow them to rape the young women in attendance. Indeed, NBC News was quoting sources as limiting the query to four individuals until the probe was widened.

Nevertheless, Trump has already said that he is confident that the investigation will find nothing, and we can proceed directly to a Senate confirmation vote.

In an unrelated memo, Rachel Mitchell, the Arizona prosecutor whom Senate Republicans hired to speak for them to protect the image of their all-white-male questioning of Blasey Ford, has argued that a “reasonable prosecutor” would not bring a case against Kavanaugh based on Blasey’s allegations. She says there are inconsistencies in Blasey’s testimony.

“A ‘he said, she said’ case is incredibly difficult to prove. But this case is even weaker than that,” Mitchell writes in the memo, which the Washington Post and CNN obtained. “Dr. Ford identified other witnesses to the event, and those witnesses either refuted her allegations or failed to corroborate them. For the reasons discussed below, I do not think that a reasonable prosecutor would bring this case based on the evidence before the Committee. Nor do I believe that this evidence is sufficient to satisfy the preponderance-of-the-evidence standard.”

Thanks, Ms. Mitchell, but this is a confirmation hearing, right? It’s not a prosecutorial review of a cold case. Standard of proof required is proving another front in this skirmish.

James Comey, the former, fired director of the FBI, and other former FBI agents say it is absurd to put arbitrary restrictions on any FBI investigation. They think that the investigators ought to be going after the small lies by Kavanaugh at the hearing – yearbook entries, whether drinking at the time was legal and the like – and building from there.  “Small lies matter, even about yearbooks,” Comey tweeted.

Meanwhile, to help muddy the waters, Sen. Lindsay Graham (R-S.C.) is saying the same FBI, you know the FBI that Trump loves to hate, should investigate the Judiciary Committee Democrats to determine who leaked Blasey Ford’s name to the public.

So, Republicans and Democrats, on the Judiciary Committee, in the Senate or beyond, are sparring about what is fair game to investigate. The FBI is supposed to find “truth,” but not draw conclusions, because this is a background review and not a criminal case. Sen. Flake, the lonely Republican who actually saw need to bring in more fact, has said if the FBI shows that Kavanagh lied to the senators, the confirmation should not go forward.

But it is unclear that the FBI is seeking those contradictions in testimony, in lieu of trying to establish the bigger issue of whether the specific Blasey Ford allegations are true.

Meanwhile, more college classmates are stepping forward to argue that Kavanaugh was a mean drunk and a big drinker in their time. But drinking and demeanor are the hearing or on his own time don’t seem to be important to Senate Republicans.

A year ago or so, before the Senate blew up its rules on the requirements for confirmation, Kavanaugh’s nomination would have required 60 votes. Now we’re debating whether we even have 50, with Senators Susan Collins of Maine and Lisa Murkowski of Alaska in the balance.  Judicial knowledge and mien were mainstay issues, along with a healthy respect for legal precedent.

Instead, we have a Supreme Court candidate who is openly hostile to at least half the country, who has shown little empathy for Blasey Ford or others, whose behavior at his own confirmation hearing has proved  often to be misleading and whose opinions, from his originalist bent, regularly seem to favor corporate interests over consumers, a bias towards gun ownership and anti-abortion, anti-women sentiments, and an unbound view of presidential power at a time when the president faces investigation himself.

Clearly, Republican senators plan to overlook all of that and any material that comes forward from the FBI in an attempt to land that perceived all-important majority on the Supreme Court. Here’s E.J. Dionne of The Washington Post: “In a process already saturated with cynicism and soured by bad faith, it would be shameful but unsurprising if an FBI investigation aimed at shedding light on Christine Blasey Ford’s accusations against Supreme Court nominee Brett M. Kavanaugh became the object of political manipulation.”

He added, “the FBI may be blocked from doing its job properly. Will it be able to provide a basis for judging the relative trustworthiness of the only two witnesses who appeared before the Senate Judiciary Committee last week?”

You know, the funny thing here is that the forgotten Obama nominee, Merrick Garland, whom the Republicans refused to even meet last year, is the chief of Kavanaugh’s court, and holds all the same positives as Kavanaugh, except that his opinions were largely in the majority in their shared Court of Appeals in Washington rather than in the dissents.

Though called as a means to bring us together, it all makes me think that the FBI inquiry could be doomed as a non-starter because it will simply widen the rift.