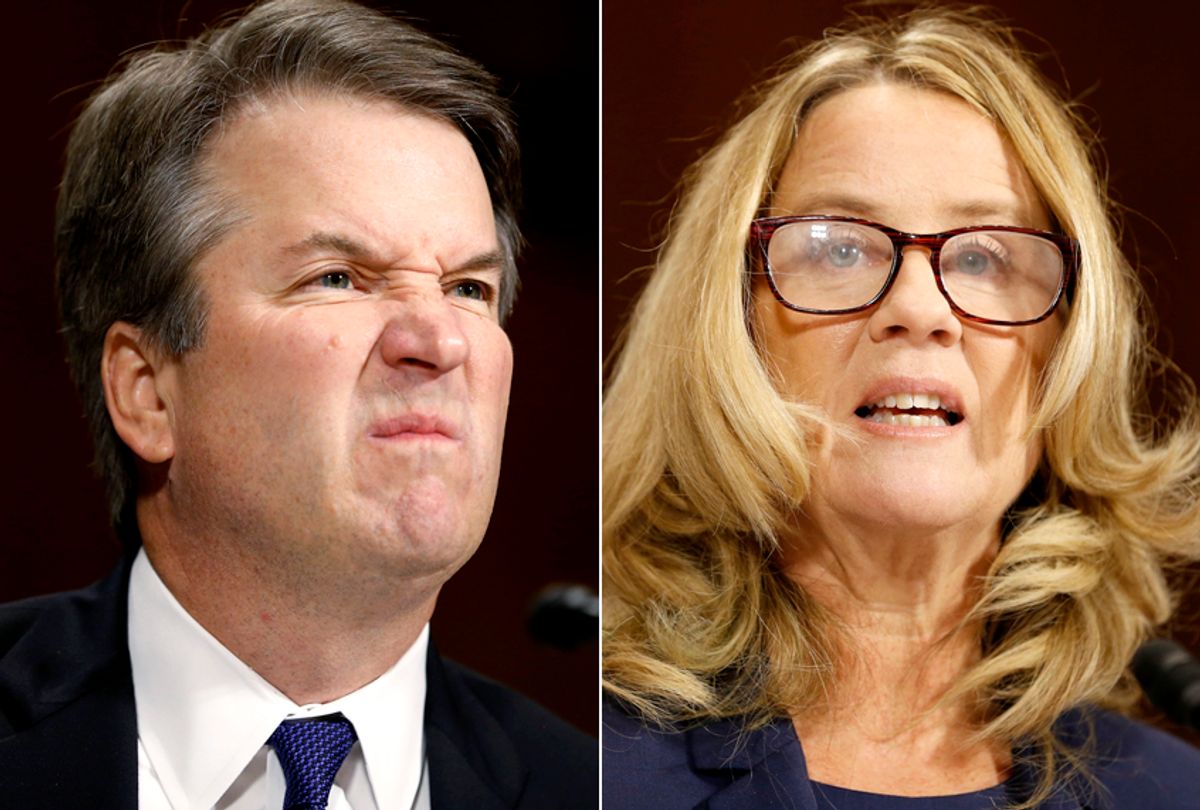 President Donald Trump openly attacked Christine Blasey Ford, the woman who has accused Supreme Court nominee Brett Kavanaugh of sexually assaulting her when they were both teenagers, during a campaign rally in Mississippi.

Trump also expressed sympathy for Kavanaugh, casting him as a victim of false allegations whose life had been ruined as a result. The judge's "life is in tatters. A man's life is shattered. His wife is shattered, his daughters," Trump told the crowd. The president also emphasized that he does not view himself as advocating for Kavanaugh for personal reasons.

"I don't even know him. I met him for the first time a few weeks ago. I don't even know him. So it's not like, 'Oh, gee, I want to protect my friend,'" Trump told the crowd. Instead, the president characterized it as a situation in which the Democrats raising awareness of the accusations against him are "evil people" who aim to "destroy people" and create a culture in which people are "guilty until proven innocent."

He also put a twist on the common refrain that Americans need to start imagining how it would feel if their wives and daughters were victimized by sexual assault, instead urging them to think of their male loved ones having "false allegations" made against them.

"Think of your son. Think of your husband," Trump urged the audience at the rally. As NBC reported, the crowd started chanting "lock her up."

There could be political consequences to Trump's decision to target Ford, as CNN reported:

Senate Majority Leader Mitch McConnell promised Tuesday that a vote would happen on Kavanaugh's nomination by the end of the week regardless of what the FBI finds in its investigation into the allegations against the nominee.
McConnell's job of wrangling key Republican senators -- he can afford to lose only one vote from his caucus -- may have gotten harder after Trump decided the time was right to mock Ford's dramatic testimony to the Senate Judiciary Committee last week.

Sen. Jeff Flake, R-Ariz., also condemned Trump's remarks, telling NBC's Savannah Guthrie on "Today" that "there's no time and no place for remarks like that. To discuss something this sensitive at a political rally is just not right. It's just not right. I wish he hadn't had done it," according to CNN. Flake is the Republican senator responsible for making sure that an FBI investigation into Kavanaugh's past could be held.

Trump's visit to Mississippi was prompted by his support of Republican Senate candidate Cindy Hyde-Smith, who is running against Democratic candidate Mike Espy and another Republican, Chris McDaniel, according to the Mississippi Clarion-Ledger. Although McDaniel is more popular among the GOP's far-right base, Trump has endorsed Hyde-Smith, creating an uncomfortable dynamic where many of Trump's own far-right supporters showed up at the Southaven rally wearing shirts that reflected support for both Trump and McDaniel.

Polls have found the Senate race in Mississippi to be quite close, especially considering that it is normally a deep red state. The special election is being held to replace Sen. Thad Cochran, who announced his resignation earlier this year due to health concerns.

While nothing has come out to cast doubt on Ford's testimony, recent reports have raised serious questions about the truthfulness of Kavanaugh's Senate testimony, particularly his claims to have not been a heavy drinker. On Tuesday a report in The New York Times revealed that Kavanaugh had written a letter as a college student in which he discussed renting a beachfront condo for himself and his friends and mentioned at the end, "warn the neighbors that we’re loud, obnoxious drunks with prolific pukers among us. Advise them to go about 30 miles..."