Mary Poppins can't return fast enough: An adult in the room is the best fantasy of 2018

Wanted: A nanny for one dysfunctional country trapped in a cycle of toxic masculinity 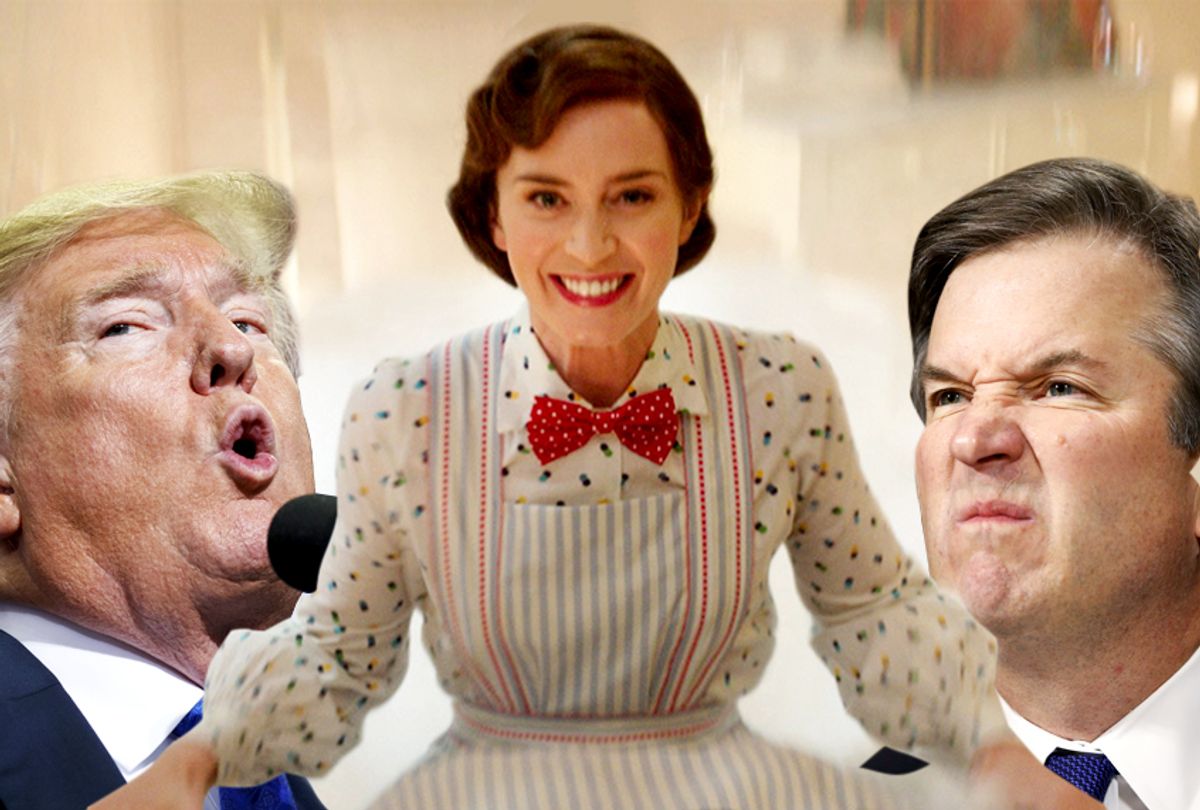 Based on the enormous reception its full trailer received, "Mary Poppins Returns" may well be the hit of this coming holiday movie season. But we need Mary Poppins — and not just the Disney version — stat, in this age of #MeToo and our national search for sanity and wholeness. Mary Poppins promises a balm for our weary psyches and a woman who will get things done — not necessarily through magic, but through the power of the everyday — a no-nonsense woman of great depth whose visage is not just fantastic, but eminently sensible.

I couldn’t stop thinking about Mary Poppins and her author, Pamela Travers (nee Lyndon Goff) as I watched Dr. Christine Blasey Ford testify before senators last week, my stomach heaving as she evinced utter clinical professionalism while describing sexual assault, including the vicious laughter of her assailants that she could not forget. I thought: What would Mary Poppins do?

In the trailer for the new film, Blunt evokes a good deal of the hauteur of Mary Poppins that is more evident in the books than in the 1964 Disney classic. Mary Poppins is not a saccharine figure. She is, in fact, a stern, haughty, vain one—and a great power. In the trailer, she comes from the sky, brought in on a kite just as in the book "Mary Poppins Comes Back." She is a salvific figure aloft on the shining clouds, come again to save the Banks family, and with them, all of us, the viewers. What kind of salvation do we seek?

In the books, the power of Mary Poppins lies in part in her ability to transmit order against the forces of chaos. She is a truly Great Communicator, able to converse with dogs, cows, and stars, among other figures. Most crucially, Mary Poppins commands with the power of the glance. When her face, like an ancient deity, appears “terrible” or with a “glare,” Jane, Michael, and even the grown-ups around them are helpless to do anything but comply.

I imagine her seated where Senator Amy Klobuchar sat in the senate hearing room when Judge Brett Kavanaugh began accusing her of drinking to excess. Klobuchar threw some admirable shade, but I shudder to think of what Poppins could have done. Mary Poppins would not tolerate the histrionics of a fragile toxic masculinity raging against the notion that sometimes, one must be held accountable for one’s actions. She would have frozen Kavanaugh in his tracks with one look. He would have squirmed, acquiesced, apologized. Off to bed with you, and take your medicine while you’re at it, no spoonful of sugar added. Spit spot.

Perhaps Mary Poppins is so strong because she was created by a woman who knew the power of self-sufficiency and how hard it was to make it in a world still quite dominated by men. Travers, an Australian native who worked as a dancer, actress, and writer before penning the Poppins books, successfully launched herself away from her birth family, across the ocean all the way to England on the power of her pen and her sheer force of will (along with some assistance from a well-off relation). She was not to be trifled with.

Despite the fanciful nature of many of the Banks’ adventures and her own fascination with theosophy, mythology, and various forms of mysticism, Travers located power in the human realm, not the divine one. In "Mary Poppins, She Wrote," Valerie Lawson quotes Travers as saying: “We cannot have the extraordinary without the ordinary. Just as the supernatural is hidden in the natural. In order to fly, you need something solid to take off from. It’s not the sky that interests me but the ground …. When I was in Hollywood the [script] writers said, surely Mary Poppins symbolizes the magic that lies behind everyday life. I said no, of course not, she is everyday life, which is composed of the concrete and the magic.”

We need Mary Poppins because right now we are desperate not for escape, but for an adult in the room and for the comfort that comes with the everyday actually going as planned. We need an alternative to boys behaving worse than badly, and we need it to be something onto which we can actually grasp. It is no accident that Lin-Manuel Miranda, who plays Poppins' cockney-accented companion Jack in this sequel, is our national poet laureate of making the everyday redolent with meaning. His enormous twitter following, particularly his “g’mornings” and “g’nights,” speaks to our need for comfort at these two uncanny junctures of the day. If Mary Poppins is the character who will tuck us safely into bed in the filmic world, Miranda is the national persona who is already holding our virtual hands as we drift off to sleep.

True to Disney form, the framing of the trailer and early publicity for "Mary Poppins Returns" emphasizes “magic.” “The magic is back,” it tells us. In an interview for the D23 fan website, producer Marc Platt says, “what you realize … is that the magic, the hope, the optimism, the connectivity that Mary Poppins brings as a character to the family and the world around her is really what people are yearning for.” One of the film’s taglines is “everything is possible…. Even the impossible.” Yes, on the non-Disney part of my screen, everything is indeed possible … including the fact that women’s voices are still, after all of these years, insufficiently heard.

In the trailer, which is set in the 1930s, we see a brief snippet of Mary Poppins singing to the bereaved next generation of Banks’ children, whose mother appears to be dead: “nothing’s gone forever, only out of place.” If only this applied to our national dignity. When sexual assault occurs, it is more than a matter of something being out of place. Something real— a sense of safety and wholeness— truly is gone forever for many assault survivors. There is little in this world more real than the pain of trauma, whether it is the loss of a parent or the loss of one’s bodily safety.

Pamela Travers once told interviewers that Mary Poppins was “not created but summoned.” Perhaps, as women around the country express our dismay over how much ground we have lost, we can summon, not magic, but our everyday fortitude as we try to put our best foot forward. Chin up, Mary Poppins reminds us. “Well begun is half done.” Spit spot.