Our coffee addiction is destroying the environment

If it’s not shade-grown, your coffee most likely destroyed forest cover and wildlife habitat 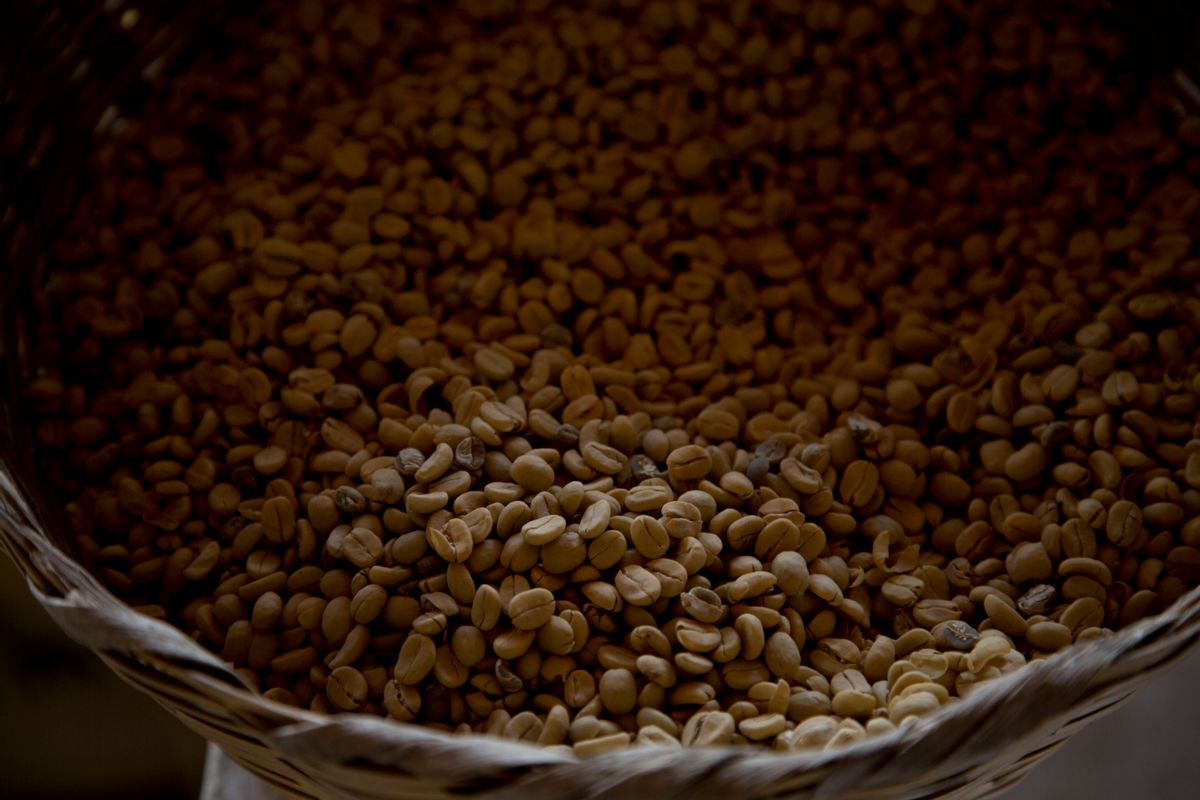 In this May 22, 2014 photo, coffee beans harvested last year are stored at a coffee plantation in Ciudad Vieja, Guatemala. The regions thousands of coffee farmers grow the smooth-flavored, aromatic Arabica beans enjoyed by coffee lovers around the world. (AP Photo/Moises Castillo) (AP)
--

This article was produced by Earth | Food | Life, a project of the Independent Media Institute, and originally published by Natural Blaze.

When you wake up bleary-eyed and craving caffeine, the last thing you may be thinking about (or want to be thinking about) may be how your coffee consumption is ruining the planet. But just as we’re all adjusting to using aluminum straws instead of disposable, plastic turtle-killers in our iced lattes, we need to reconsider the impacts our preferred morning beverages have on the world surrounding us. After all, it’s too often overlooked that these minor routine habits (like tossing out unused food instead of composting it, or using plastic shopping bags once before they end up in a landfill) can add up, contributing to the detriment of our environment.

Coffee is a commodity, the second-most tradable commodity in the world after oil, according to the Guardian. Because it’s so high in demand, more than 100 million people grow coffeearound the world, meaning the pressure for fast and cheap goods can often come before the quality of the product. “Coffee is part of a commodity market, which continues to drive prices to levels well below the cost of production, and can encourage producers to generate quantity over quality, forgoing environmentally sound practices in the process,” explains Jonathan Withers, Green Coffee Buyer at Toby’s Estate.“When it comes to sustainability in coffee, there are a vast number of factors to consider. With regards to production, sustainability is an important element in everything — growing, processing, transport, roasting, consumption — and these processes can impact things like soil health, water supply and even the migratory paths of animals like whales, birds and deer.”

And yet, it’s difficult to care about the migratory paths of deer when coffee oligarchs are selling millions of beans a year, and even fair trade farmers are making a little over a dollar per pound on specialty beans that retail for over $12 per pound in the United States. Fair trade (a practice that should ensure workers are paid and treated fairly) coffee has long been promoted as a way to combat growing inequality in the coffee market, but what if we deplete the environment so much that the coffee market no longer exists?

“Shade-grown” is yet another buzzword to look for on your bag of beans. Coffee trees grow all over the world, particularly well in subtropical climates. Because they are short plants, coffee trees are accustomed to living under the shade of taller trees and thrive underneath shade. But thanks to industrialism, this isn’t always the case. Think of human factory workers, who thrive with reasonable amounts of fresh air and sunlight-derived vitamin D, but are rather packed into windowless fulfillment centers for optimal profit and efficiency. Plants and people aren’t the same, but the logic is. Other trees and plants, which add to the biodiversity of the soil in which coffee is grown, take up otherwise lucrative space that can be used to grow coffee, and in many cases, sun-grown, or completely unshaded coffee, is more economical.

“In practice, coffee grown in diverse ecological conditions is environmentally beneficial,” says Withers. “‘Shade-grown’ can be a good shorthand for these conditions, as it can encompass good biological diversity in production environments.” Coffee that is produced in a shade-grown environment will benefit from neighboring symbiotic plants, which can also help with erosion control and, most importantly, sun exposure and temperature. “Tree canopies are a good control of morning fog, preventing moisture and colder temperatures from settling on the ground and protecting the coffee shrubs from frost,” says Withers, pointing out that shade can also promote “elongated maturation times leading to more complex, sweeter coffee.”

Unfortunately, to meet the current global demand for coffee it’s nearly impossible for all coffee to be produced in shade-grown conditions. “This is especially true in a modern world which has adapted to a century of cavalier, often destructive, coffee-producing techniques meant to produce quality,” says Withers. “Modern cultivars have been bred specifically requiring very heavy sun exposure to produce at all.” This heavy sun exposure is not only bad for the coffee beans themselves, but also the surrounding environment. Deforestation not only depletes birds of their habitats, a consequence the Smithsonian’s bird-friendly coffee program is trying to combat, and can also cause a lack of homes for several other species of plants and animals, harming the natural biodiversity of any given area and ruining the soil (and even the air and surrounding environment) coffee grows in.

Still, certification is not the only way to ensure a specific type of coffee is sustainable. Getting shade-grown coffee officially certified can also be an ordeal, with international audits, paperwork and cash costs that may not be affordable for small farmers. Just because a coffee is not certified as shade-grown doesn’t mean that it’s not sustainable. “There are two ways of looking at shade-grown coffee: the actual practice, as it occurs naturally or as engineered by a producer, or the certification, where a third party certifies the practice as such and allows for a label to be applied down the supply chain to the final branding and marketing of a product,” Withers says.

Take Ethiopia, where coffee is indigenous to the fauna, as an example. Nearly all of Ethiopia’s coffee is shade-grown under a tree canopy in the forest. And though an estimated 90 percent of the country’s coffee is de facto organic, only about 0.1 percent is certified organic. “In the two models, respectively, producers either harvest the produce of perhaps a dozen trees around their house or harvest and sell from plants in protected, national forests,” explains Withers, who travels worldwide to source sustainable coffee. “Such models do not fit with how shade-grown coffee certifies production, but it would be difficult to argue that these coffees don’t fit the environmental, social and moral ideals which the organization espouses.”

For Withers, as with many coffee buyers, he sources beans at the producer level, so he can visit farms and discuss operations. “We position ourselves to determine first-hand whether their practices meet with our own quality, social, and environmental criteria, and thus find ourselves less in a position to have to limit our selections to the black and white/yes or no position which certifications promote,” he explains. Being mindful and aware and knowing about direct relationships (if you can’t achieve them yourself) are perhaps the best ways to ensure your coffee isn’t doing excessive harm to the environment.

Beyond purchasing specialty coffee from companies who source from small-scale producers, Withers recommends purchasing coffee roasted locally (to avoid surplus transportation costs) and to be wary of certifications, which can create a false “binary approach to sustainable ethics, with overly simple qualifications for good practices.”

And, of course, avoiding disposable materials, often inherent in our grab-and-go coffee culture, will still make an impact. Toby’s uses compostable bags for retail beans, as well as compostable drinkware, and customers who bring in reusable drinkware are given a discount at the cafe. Discount or not, we’re all paying when it comes to destroying the environment, and exercising better consumer habits when it comes to coffee can pay off. No one wants to be undercaffeinated if we have to face a dystopian tree-less planet.

Melissa Kravitz is a writer based in New York. She is a writing fellow at Earth | Food | Life, a project of the Independent Media Institute. She’s written for Bon Appetit, Food & Wine, Travel & Leisure, Conde Nast Traveler, Glamour, AlterNet, Cosmopolitan, Teen Vogue, Architectural Digest, Them and other publications. She holds a bachelor’s degree in creative writing from Columbia University and is also at work on a forthcoming novel. Follow her on Twitter and Instagram @melissabethk.