Yes, the FBI's Kavanaugh investigation was a sham — but Democrats must keep their eyes on the prize

Donald Trump has the FBI intimidated, but Democrats should be careful not to alienate the embattled agency 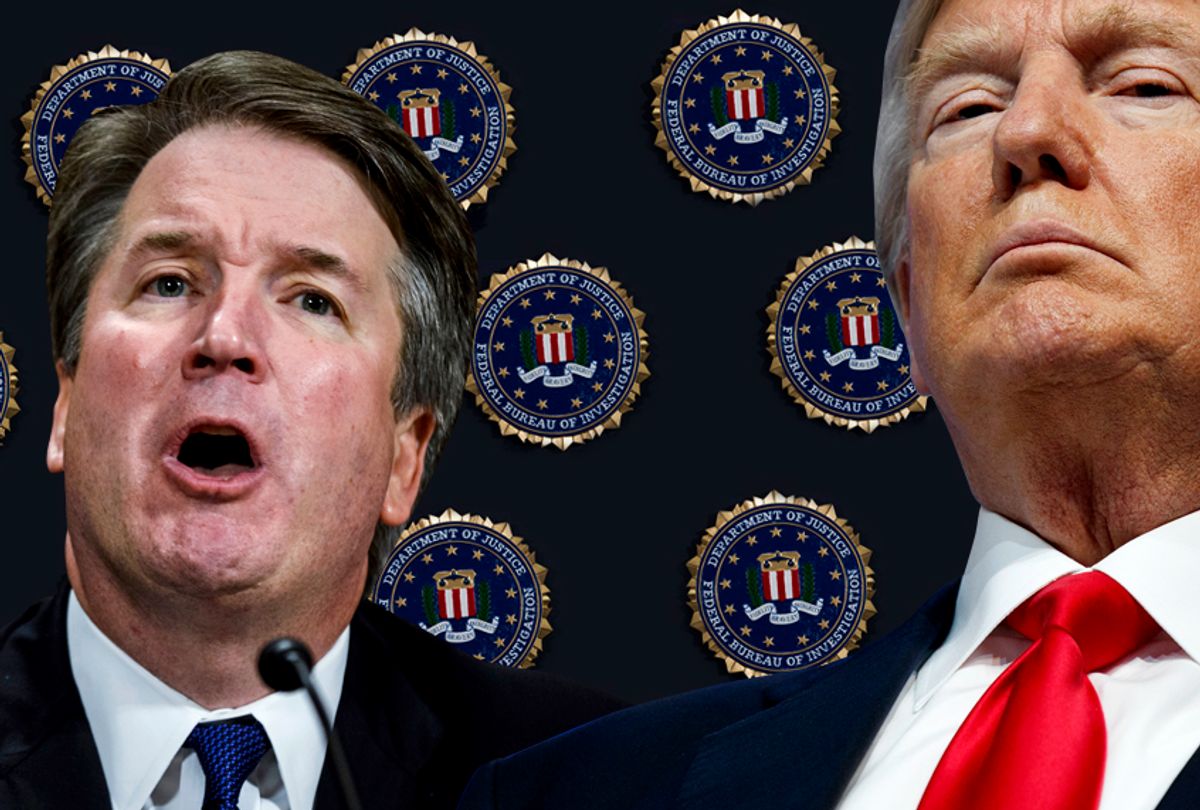 The reopened FBI background check on Supreme Court nominee Brett Kavanaugh was always going to be something of a sham. Consider how the request by Sen. Jeff Flake of Arizona was originally worded in the Judiciary Committee meeting last Friday:

I think that we ought to do what we can to make sure that we do all due diligence with a nomination this important. I think it would be proper to delay the floor vote for up to but not more than one week, in order to let the FBI do an investigation, limited in time and scope to the current allegations that are there.

Until that moment, it had been assumed that the Republicans were going to "plow through," as promised by Majority Leader Mitch McConnell. When Sen. Lisa Murkowski of Alaska and Sen. Susan Collins of Maine said they were with Flake, McConnell and the White House knew they had to go along. They didn't have the votes.

Nonetheless,  the fix was always in. Flake's request for a short investigation "limited in scope to the current allegations that are there" was wide open to interpretation. Which "current allegations" were they talking about? At that point, two other women had come forward following Christine Blasey Ford's initial accusation, and there was ample reason to investigate whether Kavanaugh had committed perjury multiple times during the hearings.

Everyone was aware by this time that the Senate had no authority to order the FBI to reopen the background check. It was up to the White House to issue that directive. What this meant in practice was that the White House would likely burn up time on the clock as much as possible and ensure that the "scope" would be very limited indeed. And that is exactly what happened.

This was cleverly disguised in a fog of shifting responsibility and presidential comments that left everyone scratching their heads about what was really going on. When asked whether he had limited the FBI investigation, President Trump said on Saturday, “They’re going to do whatever they have to do, whatever it is they do. They’ll be doing things that we have never even thought of. And hopefully at the conclusion everything will be fine.” Later on Twitter he said, “I want them to interview whoever they deem appropriate, at their discretion.”

That sounded as if the White House had decided to allow the FBI to do its job as it normally would. Experts all said this would be something the bureau could easily accomplish. After all, the FBI has thousands of employees and tremendous capacity. But reporters were already hearing that the White House would actually only allow the FBI to interview four people. Then the stories changed and nobody really knew what was happening.

The White House insisted it would defer to the Senate, while senators insisted it was out of their hands and the White House was in charge. On Wednesday the investigation was concluded and it became clear the FBI had only been permitted to interview six people, which did not include either Kavanaugh or Ford. Meanwhile, dozens of other people were coming forward with corroborating evidence, offering to make statements under oath. They received no response from the FBI.

All of this brings up an interesting conundrum. Theoretically, the FBI had a choice to make here. Trump said publicly, more than once, that he wanted agents to have free rein, follow all leads and do a thorough investigation. Obviously, the bureau was getting other private instructions from the White House. They could have chosen to take the president's public comments as their marching orders rather than the other ones. They could even claim that they had it in writing:

But the FBI did not seek that kind of confrontation, and that's not surprising. The president and his henchmen in the House Freedom Caucus have taken a page out of the old conservative movement's playbook. For years Republicans hectored the so-called liberal media for being biased against conservatives. The point was to make journalists second-guess themselves, to create a sense of paranoia and caution about being too aggressive in reporting what conservatives were doing. It was highly successful and tilted the coverage for decades, helping pave the way for the "post-truth" crisis in which we find ourselves today.

Trump has taken that tactic to a place I don't think anyone ever expected by applying it to the intelligence and law enforcement institutions. (Of course, no president has ever been so personally threatened by criminal and counter-intelligence investigations before, either.) He has been relentless in his criticism, and the effect on these institutions is to make them extremely cautious about being seen as hostile to Trump  Look at what happened to people like Andrew McCabe, Peter Strzok and Lisa Page. The message is clear.

That's how "working the refs" gets the job done.

Political reporters assume the Democrats are going to jump on this if they win the House in January:

Democrats should think hard about that. Echoing the Freedom Caucus approach and bringing the FBI before Congress over this might not be the wisest use of oversight power. Even though it's arguably more important for the long term, impeaching Kavanaugh once he's on the Supreme Court (assuming that happens) would be even more difficult than impeaching Trump. Kavanaugh's performance before the Judiciary Committee last week certainly doesn't lead one to believe that he would ever have the grace to resign, regardless of what they turn up. Putting the FBI on the hot seat over this, unless it's very carefully choreographed, could backfire.

And Democrats may have more immediate problems come January:

Sen. Jeff Merkley, D-Ore., seems to have anticipated this potential problem, making sure not to hold the FBI in contempt for the poor investigation and laying it at the feet of the White House in his comments on Thursday.

If the Democrats take over either house of Congress in January, they will have to think through all their moves very carefully. Trump and his minions have shown that they are willing to go to any lengths to protect him and keep the courts in right-wing hands. Flailing wildly at every target will quickly turn chaotic. And Donald Trump is nothing if not effective at making chaos work to his advantage.