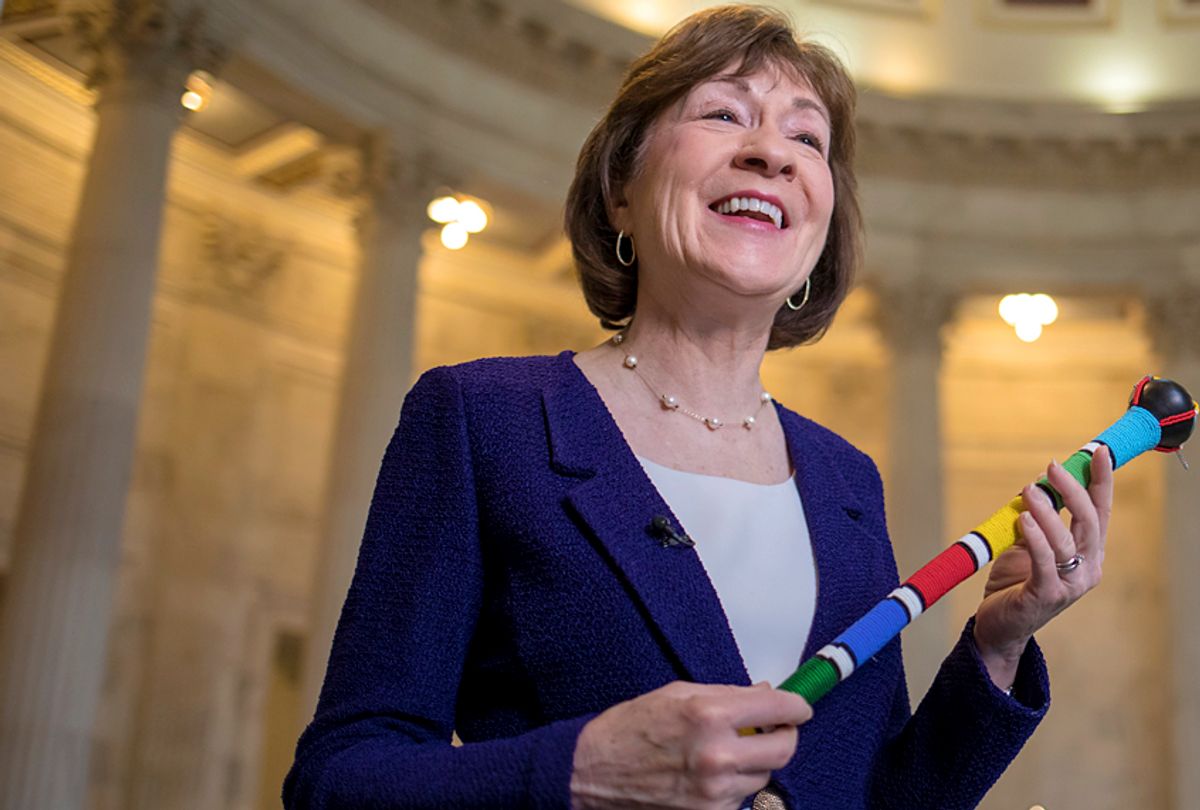 Given that Collins has taken pride in regarding herself as a voice for women's rights and of moderate Republicanism, her decision to support Kavanaugh has been met with notable disdain from the right.

We can start with the most famous writer from Maine, Stephen King, who took to Twitter on Saturday to denounce Collins' decision.

"Susan Collins says she will vote to confirm Kavanaugh, partially because the man who lied repeatedly in his confirmation hearings told her he considered Roe “settled law.” Senator Collins, there is still time to change your mind and do the right thing," King tweeted.

He later added, after retweeting a post that referred to the day Collins changed her vote as "Mean Girls Day," that "she knew Ford was telling the truth. KNEW it."

On Saturday he pointed out that "when Al Franken was accused of sexual impropriety, Susan Collins demanded he resign. Without a hearing." In addition, King noted that "on the unfair way Merrill Garland was treated, Susan Collins was silent." King later corrected this to read "Merrick Garland."

In The New York Times, Jennifer Finney Boylan observed that Collins' vote in favor of Kavanaugh demonstrated how the term "maverick" did not apply to her, at least not in any meaningful sense.

There’s another kind of “maverick,” though — the kind of centrist who wants to please everyone. For Ms. Collins, it’s often meant voting with the most right-wing members of her party, even while attempting to occupy some imaginary moral high ground. It’s hard to see what our senator got for her vote supporting the tax cut last fall. It’s just as hard for me to see her vote for Judge Kavanaugh as anything other than a warm embrace of Donald Trump and everything he stands for, her 45-minute speech notwithstanding.

Longtime presidential adviser David Gergen hit on Collins in a CNN editorial for only criticizing Democratic Party mistakes during the Kavanaugh confirmation hearing without doing likewise with members of her own party.

In her speech on Friday, Collins was right to point out that the Democrats made some egregious mistakes in the Kavanaugh process. They sat too long on the initial claims by Christine Blasey Ford and leaked her letter without her permission. They tried to incite their base, a group that already had legitimate, organic reasons for anger, and failed to acknowledge a lack of witnesses who could confirm the party in question.

But if she wanted to keep bipartisanship alive and find the best possible outcome for the Supreme Court and country, why did she not also condemn the egregious mistakes of her own party, the party that now controls all three branches of government? She should have criticized her fellow Republicans for the withholding of documents and the empty FBI "investigation."

She should have decried the GOP's rush to judgment and ignoring of Ford's own right to due process. Surely, she should have rejected President Trump's ugly taunting of Ford and the awful theory put forth that another man was the one guilty of Ford's assault.

To use such a pivotal moment, with all the eyes and cameras on her, to critique just one side and cast doubt on Ford's words was not what Americans needed. Citizens and politicians alike needed to hear an honest accounting of how this process became so ugly. We needed to be reminded not only of the way Democrats tried to block Kavanaugh but also of how Republicans blocked Merrick Garland (one of the most qualified nominees to the Supreme Court) without giving him a hearing at all.