Being a journalist could have been worse than it is now 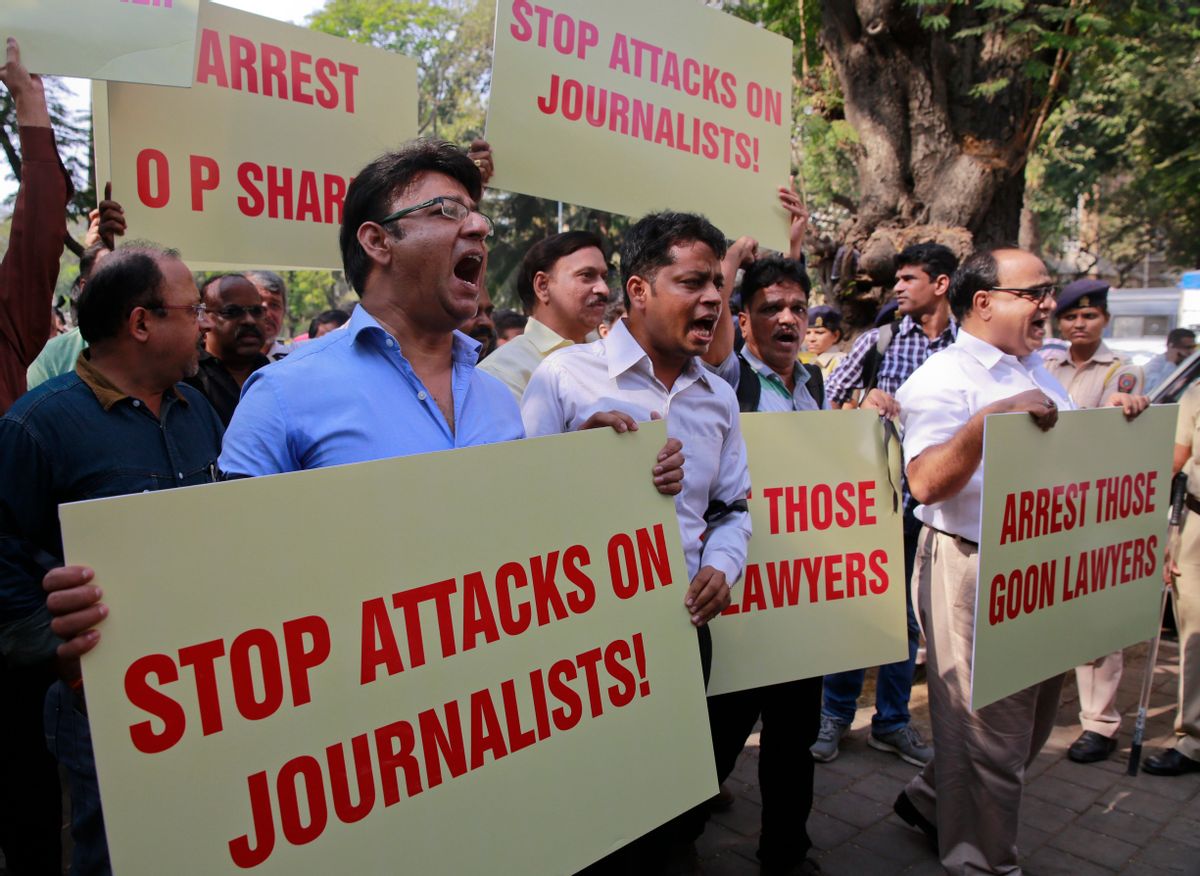 FILE - In this Feb. 17, 2016, file photo, Indian journalists hold placards during a protest against attack on journalists in Mumbai, India. Indian journalists say they face more violent threats and attacks for questioning government policy or the wisdom of Prime Minister Narendra Modi. Some have been threatened hundreds, even thousands, of times. Government and ruling-party officials have denied responsibility, while taking a hard line against anyone viewed as anti-Indian. (AP Photo/Rafiq Maqbool, File) (AP)
--

The internet has upended the journalism industry – and not in a good way.

Over the past decade, over 100,000 journalism jobs have been shed, while advertising revenue has fallen US$30 billion since 2004.

Sponsored content is on the rise. Reporters have been suspended for fabricating aspects of their stories. And, yes, entire stories have been made up out of thin air.

Not surprisingly, trust in the media has plummeted.

As a media historian, I see a lot of similarities to another era of soaring inequality: the Gilded Age of the late 19th century.

Back then, the media market was oversaturated; revenues were down; pay was poor; and publishers were locked in circulation battles, working to one-up one another for more subscribers – even if it meant engaging in some unsavory practices.

When I was researching my book “Before Journalism Schools: How Gilded Age Reporters Learned the Rules,” I learned that if Gilded Age reporters adhered to one rule, it was to do whatever it takes to get the story – even if it meant making things up.

After decades of sustained growth, many newspapers found themselves in financial trouble in the late 19th century.

The reports on printing and publishing that accompanied the 1880, 1890 and 1900 national censuses shed some light on the issue: Newspapers had saturated virtually every possible geographic market.

According to the 1900 census, 451 daily newspapers were published in the nation’s 50 largest cities – about nine newspapers per city. These newspapers competed for smaller and smaller slices of advertising revenue. Even some tiny communities had more than one daily newspaper duking it out. As early as 1880, Tombstone, Arizona, for instance, had two dailies serving a population of 973.

Newspapers also were locked in expensive battles over who could acquire and deploy the latest technologies in typesetting, illustration and printing.

These technologies were costly to purchase and operate. For instance, the linotype, a new mechanical typesetting device, cost $3,000. More significantly, trained technicians who belonged to unions needed to be hired to run the machines. These technicians couldn’t be easily fired like young reporters, known as cubs.

To cut labor costs, publishers hired novice reporters, but didn’t train them. They left it up to these raw recruits to learn basic news work on their own.

Most of these workers were not salaried employees, so during slow news periods, editors would routinely lay off reporters. Editors also paid reporters on the space system, which meant the longer the story, the more the reporters got paid.

News executives did start hiring more women than they had in the past, but the aggregate industry data from the census reports show that these women earned about $312 a year in 1900 – half as much as men.

Editors hoped women reporters writing soft news for society pages would attract more female readers and more advertisers. They also hoped to exploit women reporters as “stunt girls” – a term used for female reporters who undertook risky reporting ventures. A popular one involved being admitted to an insane asylum and then writing about the experience, as undercover reporter Nellie Bly famously did.

Even with the industry struggling, men and women were still pursuing careers in the news business. One industry trade publication, The Journalist, estimated in 1889 that 100,000 people were seeking news jobs.

To survive in a Gilded Age newsroom, cubs would have to hustle to get by – even if it meant deviating from standard practice.

They might produce fakes, stage events or abandon hazardous and time-consuming assignments from their editors. They’d also share work with reporters from competing newspapers, a tactic known as “combination reporting.”

In an era with few university-level courses in journalism, cubs learned how to master these strategies by observing more experienced reporters. They sometimes witnessed truly colossal fabrications.

Florence Kelly, a former Boston Globe reporter, recorded one of these fabrications by a co-worker in her 1939 memoir. After doing some research at the public library and concocting an interview with an imaginary ship captain, the co-worker produced a story about a volcanic eruption somewhere in the South Pacific. He then sold the story to the Globe, and the Globe turned around and sold it to European newspapers. Those newspapers sold the story once more to American newspapers.

Eventually, the story was discredited. But Kelly’s co-worker was able to keep his job by arguing that his story was based on authentic accounts of real eruptions.

He used the money he earned to buy a train ticket.

Fakes became so common that an article in an 1892 issue of The Journalist estimated that the majority of stories supplied to newspapers by local news bureaus and press associations were fiction.

While some stories were made out of thin air, other practices, like staging, required deliberation and planning.

Samuel G. Blythe described the unfolding of such a story series in his 1912 autobiography, “The Making of a Newspaper Man.”

At the time, Blythe worked for a Buffalo, New York, newspaper. One of the newspaper’s more experienced reporters purchased a cadaver’s hand and arm from a medical student. He severed some fingers and cut the arm into pieces. He then dropped fingers in a nearby canal, returned to the newsroom, and wrote a story about discovering one of the fingers.

“He speculated graphically on the problems of where the finger came from, whose finger it was, and why the police had not reported a missing man,” Blythe wrote.

More appendages in local waterways followed and so did more stories until the authorities investigated. At that point, the reporter wrote a final story exposing the hoax and criticizing police for taking so long to take action.

Our ‘era of error’

None of this delinquent newsroom behavior was extraordinary by 19th-century standards. Rank-and-file reporters openly discussed it with colleagues, none of whom reported it to their superiors. Newspaper economics and the advent of new technologies encouraged this behavior.

Today’s news environment shares some parallels with the 19th-century news world. Digital media have changed how fast and how accurately stories are written and edited. Continuous news cycles, shrinking newsroom staffs and the multiple, simultaneous demands for content have produced what Washington Post writer Paul Farhi referred to as the “Era of Error.”

The lack of formal gatekeepers on the internet has made it easier for the creators and disseminators of fake news to spread their deceptions and force out legitimate news.

Perhaps the best advice on ethical behavior for today’s reporters and editors comes from a 19th-century source.

After surviving his initiation into reporting as a 14-year-old cub and later becoming an influential news executive, Moses Koenigsberg drafted his own “Newspaperman’s Seven Commandments.”

“At all times and in all things the editor must serve the reader to the exclusion of everyone else,” Koenigsberg wrote.