In a Richard Linklater ad, actor Sonny Carl Davis mocks Ted Cruz for lacking the guts to stand up to Donald Trump 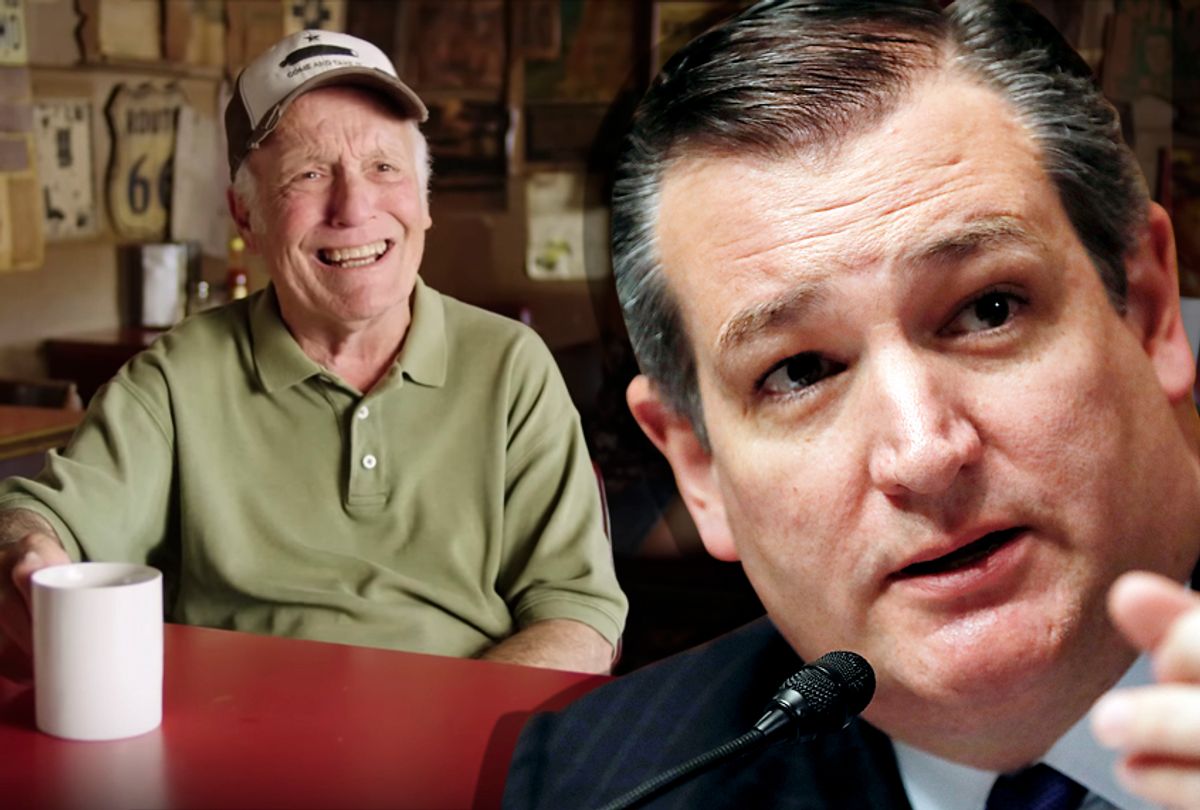 Sen. Ted Cruz might be releasing ads characterizing himself as being as "Tough as Texas," but one famous Texas actor is pointing out that Cruz's claims to toughness are undercut by his willingness to put up with being regularly humiliated by President Donald Trump.

Sonny Carl Davis, a staple of the Austin, Texas music scene in the 1970s and star of the cult classic "Evil Bong" movies, appears in the ad to bring up the occasions when Trump insulted the attractiveness of Cruz's wife Heidi and implied that Cruz's father had been involved in the assassination of President John F. Kennedy.

"I mean come on, if somebody called my wife a dog and said my daddy was in on the Kennedy assassination, I wouldn't be kissing their ass. You stick a finger in their chest and give 'em a few choice words," Davis said.

She added, "Or you drag their ass out by the woodshed and kick their ass, Ted. Come on, Ted."

Ironically, Cruz himself indirectly predicted that people would accuse him of not being tough if he didn't stand up to Trump for the below-the-belt attacks on his family. During his speech at the 2016 Republican National Convention, Cruz pointedly refused to endorse Trump's campaign and was booed by the delegates as a result, prompting the Texas senator to point to Trump's previous cruel words.

"I am not in the habit of supporting people who attack my wife and attack my father. That pledge was not a blanket commitment that if you go and slander my wife that I am going to come like a servile puppy dog for maligning my wife and maligning my father," Cruz explained on the morning after his speech, according to The Washington Post.

The ad was directed by Richard Linklater, according to The Washington Post. Linklater famously directed Davis in a similar scene from the 2011 true crime biopic "Bernie." In that film, Davis played a Greek chorus-esque figure providing context to the larger story, with a particularly famous monologue coming as he explained the cultures of the different regions of Texas to the audience. Just as in his ad against Cruz, Davis' monologue in "Bernie" occurred while he wore casual clothes and jawboned at a local barbecue establishment.

Although Democrats are hoping that O'Rourke can pull off an upset over Cruz in the 2018 Texas Senate election, the polls have not been favorable to his hopes so far. Recent polls show that O'Rourke has been behind Cruz by anywhere from 4 points to 9 points, with Cruz never falling behind despite being for the most part stuck in a single digit margin. If O'Rourke is going to defeat Cruz, it will require major turnout and a significant shift in the discourse of their campaign.