Temperatures rising and the fear of more natural disasters is affecting our mental health, a new study says 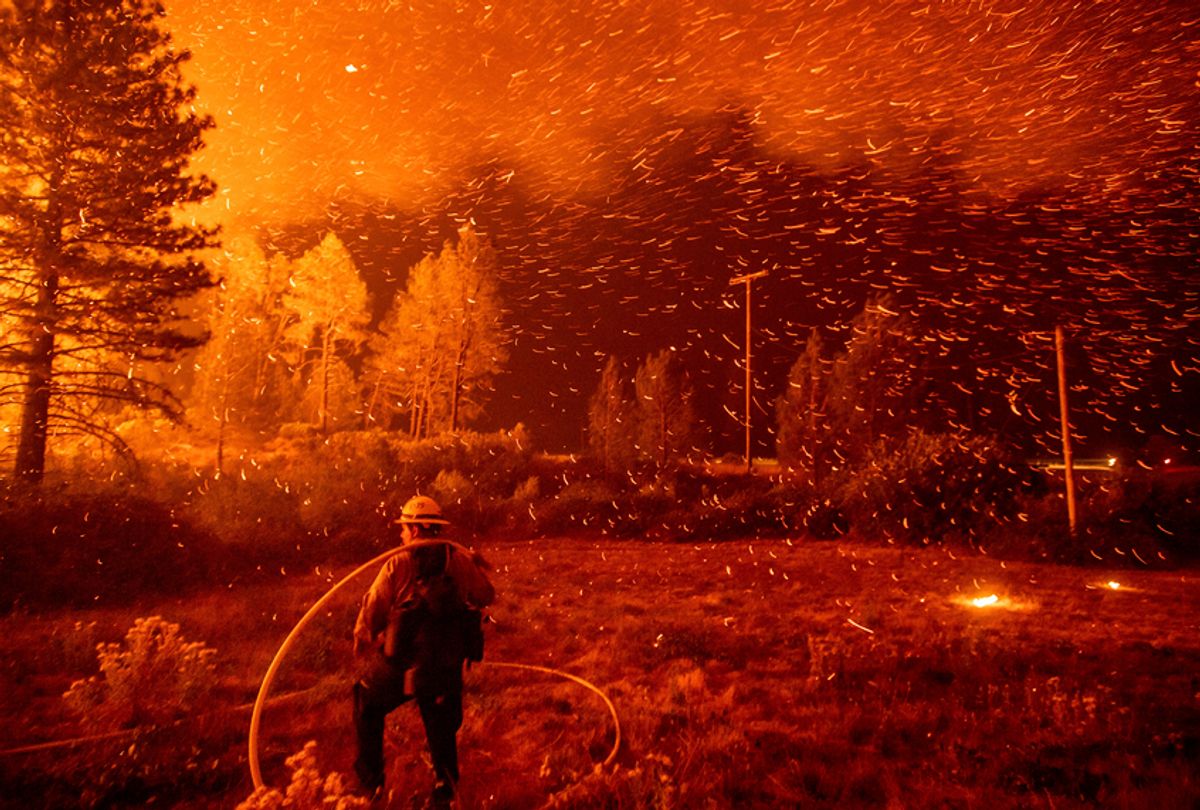 Embers fly above a firefighter as he works to control a backfire as the Delta Fire burns in the Shasta-Trinity National Forest, Calif., on Sept. 6, 2018. (AP/Noah Berger)
--

A warning on the impact of climate change from 90 scientists around the world issued on Monday did not herald good news. According to the report, issued by the Intergovernmental Panel on Climate Change (IPCC), a half-degree Celsius difference in the Earth’s rising temperature could mean the difference between saving the planet and catastrophe.

The impact of climate change extends beyond ruining Earth's biosphere and our physical safety, however. A separate report published this week suggests that climate change has a negative impact on our mental health, too.

The study, published in the journal Proceedings of the National Academy of Sciences of the United States (PNAS), links an increase in monthly temperatures to a rise in mental health issues. The empirical evidence stems from meteorological data paired with information collected from nearly 2 million randomly sampled residents in the United States. The data was collected over the span of a decade.

“We find that experience with hotter temperatures and added precipitation each worsen mental health, that multiyear warming associates with an increased prevalence of mental health issues, and that exposure to tropical cyclones, likely to increase in frequency and intensity in the future, is linked to worsened mental health,” authors of the study stated. “These results provide added large-scale evidence to the growing literature linking climate change and mental health.”

The report specifically focused on mental health outcomes due to the effects of environmental stress — such as temperature, and precipitation, tropical cyclones — but other climate change–related issues are likely to impact mental health as well — specifically, the stress and anxiety of knowing natural disasters could be more frequent as temperatures rise.

“One thing we weren't able to study was the stress/anxiety associated with the anticipation of more intense natural disasters in the future,” Nick Obradovich, lead author of the study and a research scientist at the Massachusetts Institute of Technology's Media Lab, told Salon in an email. “That stress/worry is likely to also play a non-negligible role in the mental health impacts of a changing climate.”

The Centers for Disease Control and Prevention (CDC) briefly addresses on its website the impact climate change can have on mental health: “For example, research demonstrated high levels of anxiety and post-traumatic stress disorder among people affected by Hurricane Katrina, and similar observations have followed floods and heat waves. Some evidence suggests wildfires have similar effects. All of these events are increasingly fueled by climate change. Other health consequences of intensely stressful exposures are also a concern, including pre-term birth, low birth weight, and maternal complications.”

“Policymakers should be very actively considering how to increase societal resilience to our changing climate,”  Obradovich said. “We certainly won't go wrong if we improve the overall quality and availability of mental health care. Doing so may help provide a buffer against the added mental health stress presented by climate change.”