Silver lining on Kavanaugh? Right-wing misogyny is now laid bare for all to see

The Kavanaugh confirmation exposed the pretense that "everyone" opposes sexual abuse. Maybe some will remember 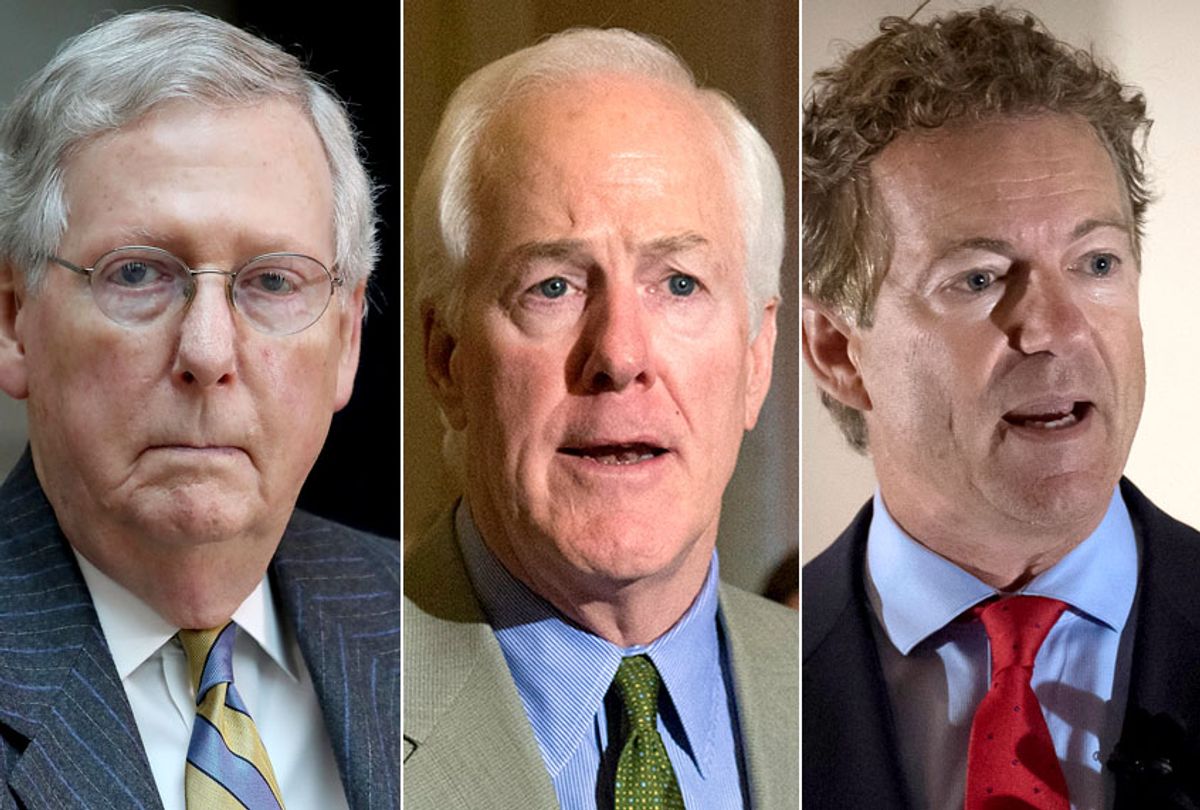 The past month has been excruciating, especially for survivors of sexual violence and those who support them. As happened previously with Donald Trump and Roy Moore, it was predictable that Republicans would not simply fall in line behind Supreme Court nominee Brett Kavanaugh when he was credibly accused by multiple women of sexual abuse. Beyond that, their devotion would soar as Kavanaugh showed himself to be an entitled, overgrown frat boy who resorted to red-faced screaming and lying at even the hint that his history with women would be examined.

Now the celebration of Kavanaugh's confirmation is taking a tone that is both overtly misogynist and winkingly approving of violence against women. The hashtag #Beers4Brett soared on Twitter, as Kavanaugh's newly minted fans toasted the beverage that fueled his alleged assault. Sen. John Cornyn of Texas, Fox News anchors and right-wing writers joined in the fun of turning beer into a symbol to spite abuse survivors. A major theme on the thread was conservatives reveling in the idea that Christine Blasey Ford, Kavanaugh's main accuser, and other anti-rape activists were suffering and crying.

(Ford is still reportedly unable to return home, due to the harassment.)

Other Republicans, while not openly celebrating the pain of the many assault survivors who protested, have nonetheless encouraged this sort of overt misogyny by painting the survivors and their allies who protested Kavanaugh's confirmation as out-of-control harpies who need corralling. Senate Majority Leader Mitch McConnell called them a "mob." Sen. Rand Paul of Kentucky contrasted the man-pleasing demeanor of pro-Kavanaugh women with the supposedly unruly behavior of feminists. Trump falsely said that anti-Kavanaugh protesters were paid, an accusation that echoes ancient misogynist myths that women lie about rape for attention or financial gain.

This whole situation is gutting, but there is one silver lining: The mask is off. The pretense that conservatives don't hate women has been ripped away and the right, drunk not on beer but on gloating about this huge victory in the war on women, is showing what it really thinks and feels about these issues. It's ugly, but at least it's out in the open.

The rise of anti-rape activism in the past decade has been met with a great deal of resistance from the right. There's especially been resistance to the idea that colleges and universities should do more to discipline students who commit sexual violence or who sexually harass their fellow students.

But right-wing pundits have been effective at concealing the true source of this hostility, using bad faith arguments about false allegations — which are exceedingly rare — to drum up public hostility towards women who speak out or toward efforts by schools and workplaces to keep their environments free of harassment and violence.

To be sure, a lot of Republicans are feebly maintaining the pretense that the Kavanaugh fight is about "false" allegations, but the real concern — fear that we will start taking allegations seriously, because the vast majority are true — is now laid bare for the public to see. Pundits and politicians are openly telling women to stay silent or be accused of being whiny babies.  By blocking a thorough investigation of the Kavanaugh allegations and insulting the survivors who protested in the halls of the Capitol, Republicans sent a clear message: They don't take sexual assault seriously as a crime; they think victims should shut up and go away.

Feminist pressure has led to a situation where mainstream media treats sexual assault and harassment as very serious matters, so much so that it's easy to forget that many Americans still blame women for provoking male violence, rather than blaming  men for committing it.

The Ohio case that gained national prominence in 2012, known as the Steubenville rape case, is mostly remembered now as one where justice was done, because two teenagers were found guilty of assaulting a girl who was passed out from drinking at a party. But it's worth remembering that injustice is why the story rose to national prominence in the first place. The case was such a searing indictment of the way that far too many Americans view acquaintance rape not as a crime, but as a sporting way to punish and humiliate women for flouting strict gender rules about chastity and sobriety.

The Steubenville case made the news because the victim was dangled out in front of the community as a hate object, a girl who had it coming for drinking and going to parties with boys. This nastiness started with the kids themselves, who made a spectacle of her suffering on social media, with one boy even uploading a video where he laughed and joked, "They raped her quicker than Mike Tyson raped that one girl."

But, as the New York Times reporting showed, this attitude didn't stop with the kids. Football coach Nate Hubbard told the paper that the girl was just using the rape as "an excuse" for her drinking. The reporter had to offer anonymity to people who objected to efforts to protect the rapists, because they were so afraid of retaliation.

These ugly attitudes still persist in many communities, as the soaring enthusiasm for Kavanaugh among Republicans in the wake of the allegations demonstrates. The New York Times published a profile on Monday of  Mississippi voters from both parties in which a Republican woman, Crystal Walls, shared her attitudes about how women need to suck up sexual violence and keep to themselves.

"Maybe she needs to talk to some servicemen that really understand PTSD," Walls said when talking about Christine Blasey Ford, before adding that "if it affects you that bad" the answer is to keep it private in counseling, instead of speaking out.

She also defended Trump mockery of Ford, saying, "I did laugh."

Right now, much of the mainstream media is interpreting this overtly misogynist backlash in horse-race terms, highlighting the alleged Republican electoral advantage resulting from conservative fury at feminists and defense of the male prerogative to hurt women. But that kind of coverage obscures the immense emotional and cultural impact of this moment. The hatred of women is laid bare for all to see, and many who previously rejected the idea that misogyny is this widespread are reeling in shock.

We must hope that this impact of this moment will linger, and people who were previously snookered by the idea that the Kavanaugh debate was about "false allegations" or "due process" will understand that was always nonsense. Feminists aren't for false allegations, and they have never opposed due process. In fact, feminist demands have been for more due process, precisely because victims are often stopped from getting any hearing for their accusations at all.

The Kavanaugh hearing exposed this reality, as feminists were quite clearly the ones demanding a full investigation and a full process in which all witnesses would be heard, and the Republicans and their base of sexual-abuse apologists were the ones hiding information and refusing to engage a process that might uncover the truth.

No doubt within a few months the pretense that "no one" supports sexual abuse will be restored. We will once again be expected to pretend that there's some other reason for all this hostility towards anti-rape activism, all this hand-wringing about the #MeToo movement going "too far" and all this resistance to schools disciplining rapists and harassers.

But as has happened in the past when Anita Hill stepped forward to accuse Clarence Thomas, or when the Steubenville case registered in the national consciousness, or when a tape of Trump bragging about how he likes to "grab 'em by the pussy" was released, a not-insignificant group of people who heard the wake-up call will stay woken up. The right-wing mask will be back in place, but some people won't forget what they saw when the mask slipped. Every time this happens, the percentage of Americans who see the truth grows larger. One day, it will be large enough to overcome.