What Taylor Swift could learn from the #NotHim son: How to handle being smeared in the culture wars

This week's unsuspecting viral star handled an unfair association like a pro, while Swift broke a long silence 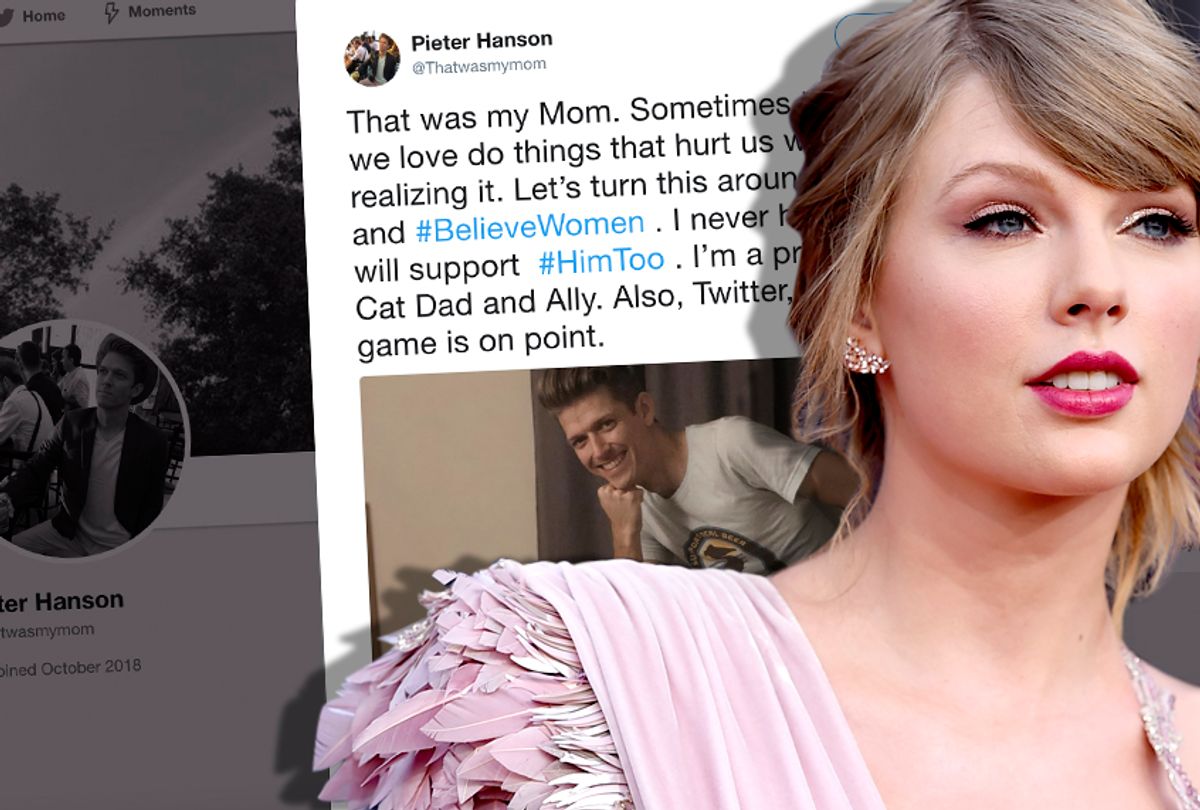 On Sunday night, Taylor Swift shocked the not-insignificant portion of the world that pays attention to Taylor Swift by breaking her silence on her political beliefs in advance of the November 6 midterm elections by endorsing two Tennessee Democratic candidates, Phil Bredesen for Senate and Jim Cooper for the House. Headlines will often crow when Celebrity X “breaks her silence” — which really means “took longer than 15 minutes to issue a statement” — yet in Swift’s case, "breaking silence" is a fair statement. With one Instagram post, Swift belatedly claimed her space in the country's political narrative, from which she had previously asked to be excused.

For years Swift has practiced an anachronistic reticence about her political leanings. Even during the contentious and celebrity-fueled 2016 presidential election, when conservative “celebrities” like Scott Baio came out swinging for their fellow TV celeb Donald Trump while A-listers like longtime Swift foe Katy Perry stumped heavily for Hillary Clinton, Swift walked the line between staying topical — posting a voting place selfie — and doggedly neutral by refusing to divulge anything about how or why she votes.

In an Instagram post, Swift acknowledged her past silence, but said “several events in my life and in the world in the past two years” have caused her to want to speak out now. “I always have and always will cast my vote based on which candidate will protect and fight for the human rights I believe we all deserve in this country. I believe in the fight for LGBTQ rights, and that any form of discrimination based on sexual orientation or gender is WRONG. I believe that the systemic racism we still see in this country towards people of color is terrifying, sickening and prevalent,” Swift wrote.

“Running for Senate in the state of Tennessee is a woman named Marsha Blackburn. As much as I have in the past and would like to continue voting for women in office, I cannot support Marsha Blackburn,” Swift continued, listing the number of reasons why Blackburn, who represents Tennessee’s 7th Congressional district and is running for the Senate seat that will be open this term when Sen. Bob Corker, an outspoken Republican foe of Donald Trump’s, fulfills his pledge to retire at the end of his second term, does not have her support.

“Her voting record in Congress appalls and terrifies me. She voted against equal pay for women. She voted against the Reauthorization of the Violence Against Women Act, which attempts to protect women from domestic violence, stalking, and date rape. She believes businesses have a right to refuse service to gay couples. She also believes they should not have the right to marry. These are not MY Tennessee values,” Swift wrote, stating that she would support Bredesen, a Democrat and former Tennessee governor, along with TN-05 incumbent Cooper, who has represented Nashville and its environs — largely considered a safe seat for Democrats — since 2003.

Swift closed her post encouraging her 112 million followers to register to vote. Buzzfeed reports her call-to-arms appears to have been successful — Vote.org experienced an unprecedented spike in new voter registrations following Swift's shout-out to the site:

"We are up to 65,000 registrations in a single 24-hour period since T. Swift's post," said Kamari Guthrie, director of communications for Vote.org.

Into the vacuum created by Swift's old-fashioned "never talk politics" approach rushed white supremacists, in jest or for real — like it matters — claiming Swift as an "Aryan goddess" avatar of femininity for their side. Swift tried the "ignore it and they'll go away" method, but when a small blog, PopFront, published a critical essay tying Swift's "Reputation" album to the Nazi Sweetheart rumors, they were threatened with legal action from her team, who sent a letter that stated: “Ms. Swift has no obligation to campaign for any particular political candidate or broadcast her political views, and the fact that her political views are not public enough for your taste does not give you the authority to presume what her political opinions may be or that her political views correlate to the support of white supremacy.”

All of that is true, and yet none of it helped quell the general feeling that at best, Swift, beloved in areas both Red and Blue, was cynically refusing to denounce neo-Nazis, of all people, to preserve her neutrality for financial gain in a marketplace that had grown increasingly polarized along culture war lines. By playing coy about her politics — as is her right — for so long that actual Nazis were able to capitalize on her fame, she abdicated the high ground for long enough to cause some damage-by-association.

Of course, because we are talking about Taylor Swift plus social media in an awards show buzz cycle that needed some goosing as the country's attention has been on Brett Kavanaugh's Supreme Court confirmation, cataclysmic climate change, and — oh yeah — Kanye West, Buzzfeed also reports that Swift may have had ulterior motives for poking the Trump bear in advance of her performance on tonight's American Music Awards, the redheaded stepchild of its genre. Thanks for the buzzkill, Buzzfeed, but you're probably not wrong.

Swift used to be the master of manipulating the news cycle in her favor, though she's lost a bit of her touch since Kim Kardashian issued her receipts on the phone call of doom and Swift's own apolitical posturing pushed her somewhat out of the discourse spotlight — though certainly not out of the celebrity limelight.

Had Swift claimed her political space earlier — or even just committed herself to the actually not controversial stance that "Nazis aren't welcome in the Swift fandom," she could have avoided the sideways Trump- and alt-right associations that have been assigned to her without her explicit consent. In this arena she might take some lessons from a newly-minted social media celebrity whose status as meme du jour was thrust upon him without his knowledge or participation — by his own mother, no less.

Imagine being in poor Pieter Hanson's jaunty spitshined shoes, learning that a photo of him in full Navy uniform posted by his mom last weekend, alongside a terse #MeToo-backlash screed. From @BlueStarNavyMom, who has since deleted her account: "This is MY son. He graduated #1 in boot camp. He was awarded the USO award. He was #1 in A school. He is a gentleman who respects women." So far, so good! Oh, but Mommmmmm: "He won't go on solo dates due to the current climate of false sexual assault allegations by radical feminists with an axe to grind. I VOTE. #HimToo."

Oh. My. God. Hanson told the Washington Post he was taking a marketing exam when everyone he knew started texting him about his mother's tweet, which went viral and turned him into an instant meme. Hanson's brother Jon weighed in yesterday evening, posting a photo of himself with Pieter, and writing, "My brother is trending on twitter because of my mom's ridiculous tweet. I'm a mixture of laughing hard and feeling bad for him. #HimToo". According to Jon Hanson, his @BlueStarNavyMom just likes attention, and she made the whole "won't go on solo dates" stuff up. Well, Thanksgiving will be fun this year!

It's what Pieter Hanson did next that turned a potentially dark family melodrama into internet gold. Though I would never actually encourage anyone to create a Twitter account, he jumped into the stream of bots and trolls and Swifties with the courage of an officer and a gentleman to reclaim his narrative — as @ThatWasMyMom — complete with his own selfie send-up of the photo his mom posted. He's a proud Navy vet, a "cat dad" and an ally — "I respect and #BelieveWomen" — but also a son who manages to be kind about his mom with this public declaration of independence: "Sometimes the people we love do things that hurt us without realizing it. Let's turn this around."

This is the Twitter account, complete with cat photos, of a man who will be inundated with solo date offers now:

Hanson remains protective of his mom, kooky Twitter shenanigans be damned — he and his brother spoke to WaPo on condition that she not be named or identified, out of concern for the trolls who would certainly target her, because hey, she's still his mom — but also firm in his convictions. "[Her post] doesn't represent me at all," he told the Post.

He defended himself with an admirable sense of humor and — dare I say it? — class, and he did it fast, before his likeness could be used to hurt more women in the post-Kavanaugh misogynist backlash against #MeToo that his mom's post sought to further. Making an impactful statement with both humor and integrity is something Taylor Swift eternally seems to be reaching for but often fumbles when the stakes seem high, most likely because her insane level of fame has made her so self-conscious that "real reaction" has ceased to feel a possibility.

Given that astronomical level of fame and its byproduct, self-consciousness, will Swift ever let herself just react as any other human might when their likeness is used as cannon fodder in the culture wars? Hard to say. Swift's statement is a win for voter registration, but it remains to be seen if it can push Bredesen into the Senate. But at least the alt-right knows now she's not on their side. Whatever happens in November, she should consider teaming up with Pieter Hanson for some kind of Thanksgiving Day equal rights event. The time to excuse yourself from the narrative swirling around us, threatening the lives and relationships and health of so many in this country, passed long ago.